TAMPA, Fla. – The USL Championship announced the Team of the Week Presented by Cleer Audio for Week 2 of the 2021 regular season on Tuesday, with San Antonio FC’s Santiago Patino taking Player of the Week honors after recording a hat trick in his side’s season-opening contest against Colorado Springs Switchbacks FC.

An offseason signing by SAFC, the Colombian forward made a bit first impression for the socially distanced fans at Toyota Field. Patino opened the scoring for San Antonio in the 16th minute before doubling his side’s lead with an impressive volley that on Monday was nominated for the Championship’s Fans’ Choice Goal of the Week award. Patino rounded out the night with three minutes to go, claiming the second hat trick in San Antonio FC history.

Patino earned 52 percent of the ballot for his performance. Phoenix Rising FC’s Santi Moar finished second on 33 percent after the Spaniard recorded one goal and two assists in his side’s 4-1 victory against San Diego Loyal SC on ESPN2 last Friday night. 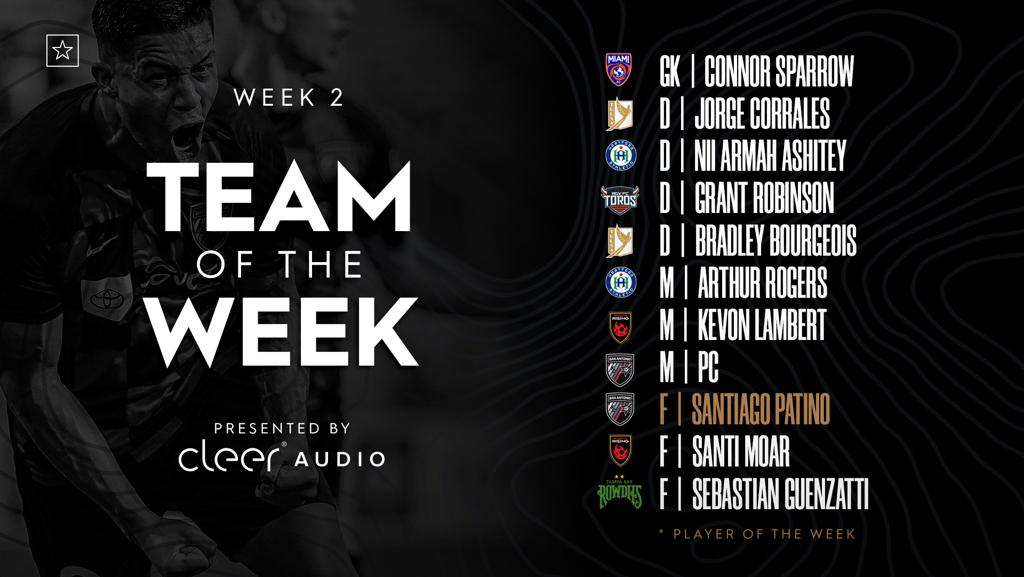 GK – Connor Sparrow, Miami FC: Sparrow recorded eight saves and three punched clearances as he helped Miami hold on for a 2-1 victory against Loudoun United FC despite playing down a man for the final 75 minutes of the contest.

D – Jorge Corrales, FC Tulsa: Corrales notched his second assist in as many games, completed 35 of 42 passes overall and three key passes while also winning 9 of 10 duels and recording four interceptions defensively in a 2-0 win against Sporting Kansas City II.

D – Nii Armah Ashitey, Hartford Athletic: Ashitey made seven interceptions and 12 recoveries, won 4 of 5 tackles and 10 of 16 duels in an impressive debut performance at the back for Hartford in its 3-2 victory against the New York Red Bulls II on Friday night.

D – Bradley Bourgeois, FC Tulsa: Bourgeois won 4 of 4 tackles and made five interceptions and 15 recoveries defensively and also completed 36 of 45 passes and 2 of 5 crosses on the ball in Tulsa’s 2-0 win against Sporting Kansas City II.

M – Arthur Rogers, Hartford Athletic: Rogers found the net once and was active throughout in midfield, winning 9 of 15 duels and 5 of 6 aerial duels while recording 13 recoveries and three interceptions in Hartford’s 3-2 win against the New York Red Bulls II.

F – Santiago Patino, San Antonio FC: Making his debut for SAFC, Patino recorded a hat trick and finished with seven shots overall to lead his side to a 3-0 victory against Colorado Springs Switchbacks FC on Saturday night.

F – Sebastian Guenzatti, Tampa Bay Rowdies: Guenzatti powered the Rowdies to an opening-night victory with two goals and one assist in the side’s 3-0 victory against the Charlotte Independence on Saturday night.