Launches The 1909 Club, begins accepting deposits for season tickets ahead of 2022 inaugural season

NEW YORK – A professional soccer-specific stadium is coming to New York’s Five Boroughs, and it’s going to be in Queens.

2022 USL Championship expansion side Queensboro FC announced on Tuesday it would open its inaugural season in 7,500-seat soccer-specific venue on the campus of York College of The City University of New York. QBFC’s home has been designed in partnership with Populous, a leading global architecture firm that has created some of the world’s best sporting facilities.

“Today is an exciting day for Queensboro FC. The announcement of our home stadium site at York College represents a bold new chapter for professional sports in New York City,” said Jonathan Krane, Owner of Queensboro FC.  “More importantly, we are proud to deliver our QBFC fans a dedicated soccer specific venue, built by and for the Queens community, bringing us all together to celebrate the beautiful game.”

“Today is an exciting day for York College, Queens, QBFC and the United Soccer League,” said USL COO and Chief Real Estate Officer, Justin Papadakis. “We are thrilled to welcome Jonathan Krane and QBFC to the USL. Soccer is the world’s sport, and Queens is the world’s borough. Bringing Queens a first-class professional club to call their own is a historical moment. I’m confident that in the not-so-distant future, we will see young players who are playing on the fields at Flushing Meadows Corona Park taking the pitch under the lights of this beautiful new venue, representing their hometown.”

Home to residents spanning more than 150 different nationalities, the passion for the game of soccer in the Borough of Queens is evident every weekend when thousands of players gather at Flushing Meadows Corona Park, an iconic Queen’s destination for local amateur soccer teams and their families. Through the arrival of professional soccer and QBFC, New York’s vast immigrant community finally has a local pro team to call its own, with the new stadium set to become a home away from home as the club kicks off next year.

In working alongside Populous – which has created iconic theaters of the game such as Wembley Stadium (English National Stadium), Soccer City (South Africa National Stadium), Emirates Stadium (Arsenal) and Tottenham Hotspur Stadium around the world, as well as Audi Field (D.C. United), Children’s Mercy Park (Sporting Kansas City) and Exploria Stadium (Orlando City SC) in the United States – QBFC’s new home will adhere to the highest standards and best practices of a post-COVID era, with frictionless commerce along with other health, safety, and sanitation protocols. The pitch will be a turf playing surface, which will allow the venue to be a year-round asset for sports, entertainment and community events. 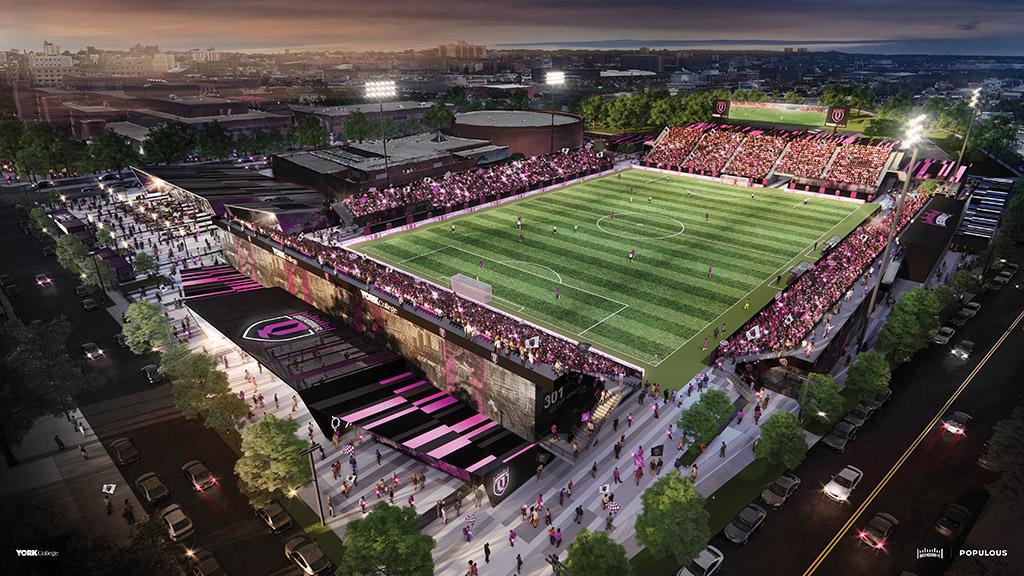 Queensboro FC's first home will be on the campus of York College of The City University of New York in the heart of the Borough of Queens. | Rendering courtesy Populous / Queensboro FC

“The City University of New York is proud to partner with Queensboro FC in bringing a professional soccer stadium to York College in Queens, a place world-renowned for its cultural and linguistic diversity, and for its love of el fútbol,” said CUNY Chancellor Félix V. Matos Rodríguez. “This new stadium is a great addition to the York College campus and will benefit not only CUNY students and the local community, but all New Yorkers and fans of soccer.”

Queensboro FC has already begun building its footprint in the borough with the club’s USL Academy program competing this spring against fellow teams from around the region. As it begins to build its professional squad – a process being overseen by former FIFA World Cup-winner and co-Owner David Villa alongside Sporting Director and Head Coach Josep Gombau and Technical Director Luis Gutierrez – Queensboro FC has also launched The 1909 Club, named in honor of the Queensborough Bridge, which opened in 1909 and is an integral part of QBFC's crest.

To officially kick off ticket sales for the 2022 inaugural season, QBFC is offering a limited-time promotion for the first 1,909 people to place a deposit, which grants lifelong membership in the 1909 Club. Fans can place a $25 deposit for the opportunity to purchase up to six season tickets and choose their seat location in the new stadium. The deposit will apply as a credit towards the total cost of their season ticket plan. Seat selections are made in the order of deposit placement, and the club encourages fans to place their orders early by visiting the Queensboro FC website.

“Sports bring people together from all walks of life, to create shared experiences in support of a common cause, and soccer is a passion point that connects New Yorkers with one another,” said Congressman Gregory Meeks (NY-05). “Queensboro FC’s stadium at York College will bring sustainable, multi-generational benefits to the community, and we believe the club will continue to work hard for the people of Queens.  We are proud to have QBFC as the newest professional sports team in New York City.”

“Queens is the home for sports,” said Queens Borough President Donovan Richards, Jr. “From baseball to tennis, and now we are proud to add soccer to the mix. I am thrilled Queensboro FC will have York College to call home, and can’t wait for Queens families to enjoy soccer games once the stadium is completed. Thank you to CUNY, my fellow elected officials and all the partners for making this happen. Can’t wait to cheer on our soccer stars here in the World’s Borough!”