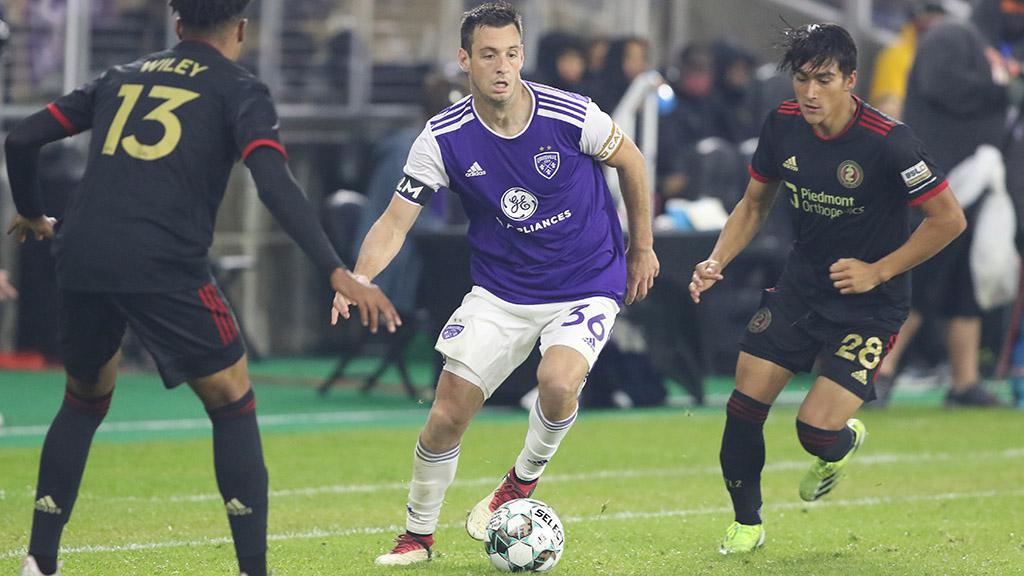 Two games down in the 2021 USL Championship’s regular season, two wins in the Central Division. Here are five talking points from Week 1 in the campaign.

There was a 15-year age gap between the oldest player in the starting lineup (Corben Bone, 32) and the youngest (Jonathan Gomez, 17) for Louisville City FC on Saturday night, but in the end the experience in the lineup proved decisive as Paolo DelPiccolo scored both goals while Oscar Jimenez and George Davis IV provided the assists in a 2-0 victory against Atlanta United 2.

It wasn’t just the goals that stood out in DelPiccolo’s game, though. Playing in a more attacking role as Akil Watts sat in front of the back line, the 29-year-old was a consistent presence in the center of the field, completing 49 passes, one key pass and making eight recoveries to help drive LouCity forward. Add the contributions from Davis, whose cameo appearance netted his ninth assist in LouCity’s colors, and Louisville came away with the right result for its opener.

“I would like to thank Paolo DelPiccolo for carrying us all. He did a great job,” said LouCity Head Coach John Hackworth. “I felt like we were going to get one sooner or later. Eventually, we did. It was nice to add the second and nice that George comes on and gets an assist to Paolo – wonderful from that perspective.”

The days of George Davis IV being a regular member of the Louisville lineup might be behind him, but the 33-year-old reminded everyone of why he’s been one of the Championship’s mainstays since earning All-League honors in his rookie season in 2011.

“It’s incredible what he’s doing, it really is, but people sometimes forget that he’s a three-time champion and this guy is a baller,” said DelPiccolo. “He is far from the end of that, so he comes out and grabs an assist and we see it every day in training. He’s a good footballer, so it doesn’t surprise anybody, and we are happy for him but not surprised at all.”

Davis’ appearance was his 234th in the Championship’s regular season, leaving him 16 appearances shy of becoming the first player in league history to reach the 250-game mark. After Saturday night, that certainly seems within reach before the end of this campaign. 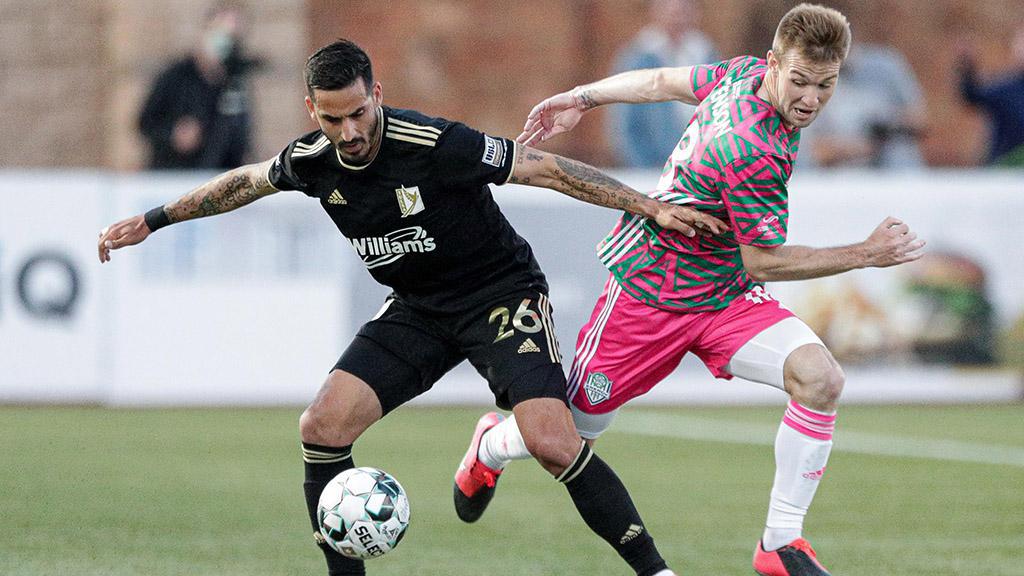 With two goals – including an early Goal of the Year candidate – FC Tulsa’s Joaquin Rivas took the headlines on Saturday night in his side’s 3-1 victory against Black Gold Derby rival OKC Energy FC, but both Joaquin Rivas and Matt Sheldon also put in strong displays to help the visitors earn their second win all-time at Taft Stadium.

Both players picked up assists on Rivas’ two goals, while Corrales recorded three Key Passes overall,  won 4 of 5 duels and made 10 recoveries  shuttling up and down the left flank. Sheldon was equally effective on the right, and almost found the net himself with a powerful strike that was tipped onto the right post by OKC goalkeeper CJ Cochran late in the first half. Those performances helped steer the way to an important road win to start Tulsa’s new season.

“The significance of getting three points here, and the way that we got it obviously,” said Tulsa Head Coach Michael Nsien. “And you have to expect that they’re going to push for everything in the second half. It was important that we weathered the storm, we didn’t want to drop off, but it kind of just went that way. We had to reorganize, and the guys sucked it up, and then we get the sucker punch at the end, so it’s the way you like to draw it up for an away match.”

ENERGY FC LOOKING TO BUILD ON SECOND HALF

Falling to your closest rival is never the way a team would want to start a new season, but while OKC Energy FC was disappointed to fall in front of an enthusiastic home crowd at Taft Stadium on Saturday night to FC Tulsa, the way the side performed in the second half was a big positive for new captain Conor Donovan.

“I think the performance in the second half is indicative of how we are still growing,” said Donovan. “You can see we want to play, and we want to be together. I think growing those relationships is a big goal, but there are still 31 games, and we can’t hang our heads after one loss.”

Donovan’s goal with 14 minutes to go provided the impetus for a big finish for the hosts, who had much the better of the game after the break after conceding twice in the first half. That effort ultimately came up short thanks to Dario Suarez’s late tally for Tulsa, but after numerous offseason changes at Taft Stadium the belief is there are better days to come for Head Coach John Pascarella’s side.

“We’re still in the early phases of the season so there will be some of those rhythm and communication things that will get better,” said Pascarella. “Tonight was opening night, everyone got their jitters out in the first half and it was a much better second half.”

A cursory look at the numbers in Louisville City FC’s 2-0 victory against Atlanta United 2 would make it seem a relative cruise for the hosts at Lynn Family Stadium, but the effort Louisville had to put in to make sure its dominance on the ball and in the shot total belied the challenge Atlanta posed the perennial title contender.

“I hope that everybody recognizes that that was a good team in Atlanta – really organized,” said LouCity Head Coach John Hackworth. “They took away a lot of what we were trying to do.”

Entering the season in a state of flux – not only will interim Head Coach Tony Annan depart the club once a permanent appointment is made to assume his new role as Head Coach at the University of South Carolina, but there were notable absences including offseason acquisition and Argentine U-20 goalkeeper Rocco Rios Novo – Atlanta put in a creditable performance and could prove a solid challenge for other clubs moving forward.