Hamilton at the Double as Indy Downs Whitecaps FC 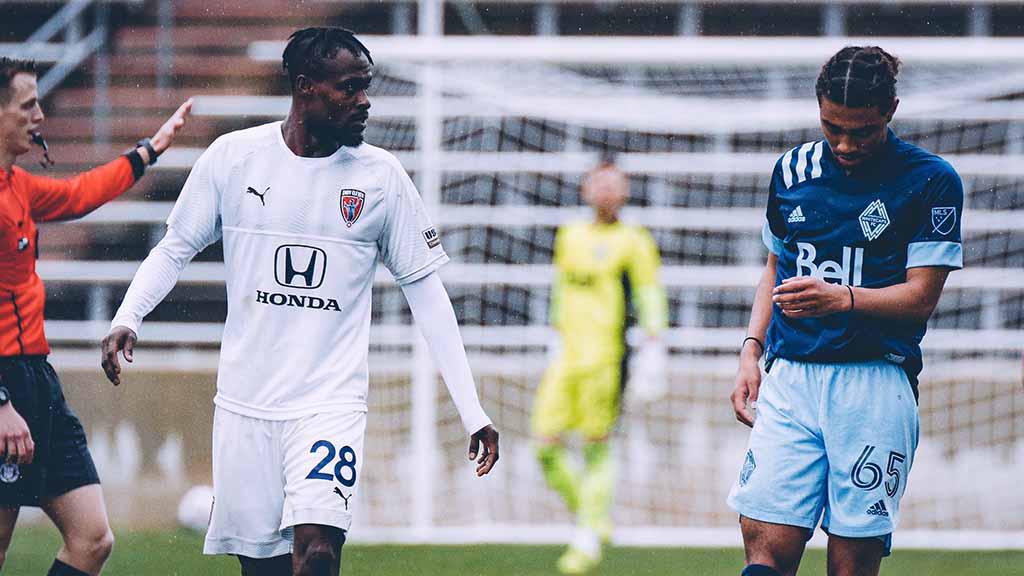 In a contest that saw both Indy Head Coach Martin Rennie and recently acquired Whitecaps FC goalkeeper Evan Newton facing their former clubs, Indy took the lead in just the fourth minute. The Canadian played a 1-2 with fellow forward Nick Moon in the right side of the penalty area, spinning off his defender to receive the return pass and fire home from eight yards out.

Another new arrival to Indy this offseason, midfielder Cammy Smith, put a low shot on target in the ninth minute that took a fortunate deflection right into the arms of Newton. Two minutes later the ex-Eleven ‘keeper was at it again, making a big stop on Gershon Koffie, who turned an effort goalward after Ayoze recycled possession from a corner kick to deliver into the penalty area, creating the chance.

Vancouver then began to gain a foothold, and young Canadian striker Theo Bair forced a good save from Indy goalkeeper Jordan Farr in the 13th minute. The resulting corner kick resulted in more danger, but Vancouver defender Gianfranco Facchineri headed over from 10 yards.

Farr made another pair of saves to keep the Boys in Blue ahead in the 17th minute, the first on a nice diving effort to his left that parried the ball away to safety. A minute later, Farr cut down a chance on the left goal line as he produced a sliding challenge to clear.

Indy regained some momentum as Moon was involved in two chances that came in quick succession. The first again saw Newton forced into a save by Smith, whose shot marked the final big chance of the first 30 minutes. Ten minutes into the second period, however, Hamilton found his second as Moon won and then quickly took a throw-in on the right. The quick resumption caught Vancouver off guard, allowing midfielder Aboubacar Sissoko to move the ball centrally and clip a short ball for his fellow Canadian to finish inside the right post from about 15 yards.

Vancouver nearly got a goal back in the 43rd minute as Damiano Pecile put Kamron Habibullah into the left channel on a counter, but after looking to the far post he dragged his effort just wide of the mark. Indy then threatened again in the 50th minute when Smith got Moon involved on the right side, but his cross to the top of the six-yard area for a trialist forward was nodded out for a corner on a pivotal intervention by a Vancouver defender.

The final quarter-hour wound down quietly, but Indy produced one final chance just before the conclusion when Sissoko’s chip cut through a trio of defenders to find Smith, whose shot from 25 yards whistled just high. The scrimmage ended shortly after, giving Indy a positive boost to their preparations for the new Championship season.