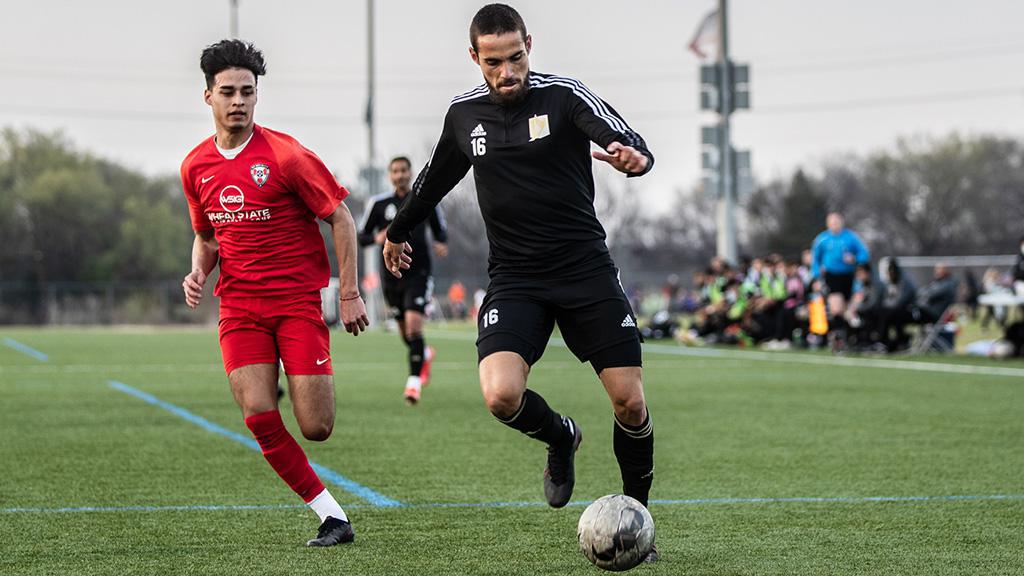 FC Tulsa's Rodrigo da Costa was among the goalscorers as the side took a 5-0 win against USL League Two side FC Wichita on Friday in a preseason exhibition. | Photo courtesy FC Tulsa

TULSA, Okla. – Jerome Kiesewetter scored either side of halftime and Joaquin Rivas also found the net upon his return from international duty as FC Tulsa cruised to a 5-0 victory against USL League Two side FC Wichita in a preseason exhibition on Friday night at Titan Sports Complex.

Tulsa opened the scoring in just the third minute when he took a pass from Stanley Oganbor at the top of the penalty area and fired a shot in off the left post. Fresh off his international appearances for El Salvador over the past week, Rivas doubled the lead off a cross delivered into the area by defender Bradley Bourgeois in the 22nd minute.

Kiesewetter then bagged the next two goals of the night, the first coming two minutes before the halftime break as he earned a penalty kick. The former U.S. Men’s National Team forward fired home powerfully from the spot to make it a three-goal lead at the halftime break. Kiesewetter then added Tulsa’s fourth seven minutes into the second half as he clipped home a close-range finish off a pass by Rodrigo Da Costa.

The same duo linked up again two minutes later, this time with Kiesewetter setting up da Costa for a turning shot into the roof of the net. The hosts then saw out the remainder of the game, putting together a strong performance after its tough road stint in Texas last weekend that Head Coach Michael Nsien believed would give the side a boost in confidence.

“We just want to create some momentum. We have kind of a short preseason, because we had a week of integration,” said Nsien. “We feel like we’re a little bit behind. We talked about the different phases of play that we want to improve upon, but today we wanted to have a winning mentality. We gave up quite a bit of goals in Texas, so today we wanted to keep the clean sheet and we wanted to score a lot. We had some success in that department.”

Kiesewetter’s goals were his first of the preseason since arriving as one of Tulsa’s big new arrivals this offseason from Major League Soccer’s Inter Miami CF, giving the forward a positive boost with the club’s USL Championship opener against Black Gold Derby rival OKC Energy FC three weeks away.

“I mean at the end of the day, the score matters to everybody,” said Kiesewetter. “We don’t go all down the page and say we don’t want to win. But the most important thing in preseason is the chemistry and the trust and to find each other; to know each other and know what everybody’s strength is. Yeah, that’s what preseason is for. The win is good too, but more important I think is flaws; to build trust, to build the chemistry, and to find each other.”