Arteaga, Ayoze both find the net in 3-1 win against Detroit City FC 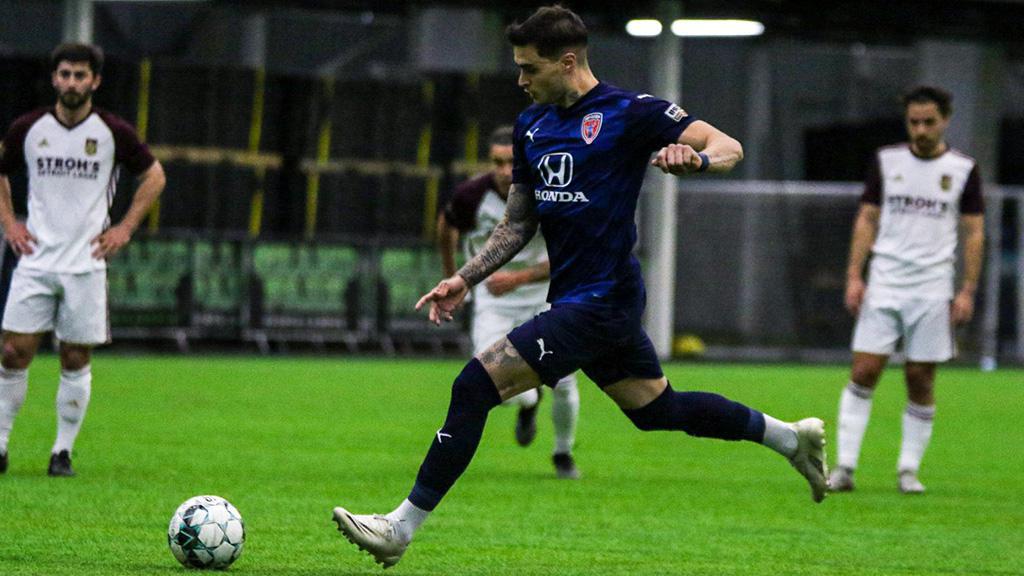 WESTFIELD, Ind. – Both Manuel Arteaga and Ayoze scored from the penalty spot as Indy Eleven took a 3-1 victory against Detroit City FC on Tuesday afternoon in its preseason exhibition opener at the Grand Park Event Center in Westfield.

“Overall, it was a good game one. It was a hard game against a team that has had a lot of success in their league,” said Indy Eleven Head Coach Martin Rennie. “We played quite well. A few things we need to work on, as you would expect just a few days into training, but I was pleased. Everyone seemed healthy from what we could see at the end of the game. It was a good day for us.”

Indy’s first clear chance came to new arrival Arteaga in the eighth minute when he nearly latched on to Rece Buckmaster’s long ball from the right flank, only to see DCFC ‘keeper Gabe Rosario beat the Venezuelan forward to the ball. Detroit threatened in the 13th minute when former Eleven midfielder Kevin Venegas saw his effort from 30 yards palmed over by Indy goalkeeper Bobby Edwards.

Buckmaster earned Indy a penalty kick shortly after the half-hour mark when he was tripped by a DCFC defender in the area. Arteaga took advantage, shooting straight down the middle after Rosario had dove early to put Indy Eleven up 1-0.

Indy started an entirely new lineup to begin the second half, and some good chemistry came quickly just three minutes in when midfielder Nicky Law’s give-and-go deep inside the Detroit area with guest striker “Bluejay” was just nicked away and out for a corner.

Minutes later, DCFC midfielder Pablo Cruz was fouled just outside the area to set up a Venegas free kick from 20 yards out. The veteran midfielder’s low shot made it through the Indy wall, past outstretched Eleven goalkeeper Jordan Farr, and just inside the left post to even the score in the 51st minute.

On the hour mark, Detroit forward Yazeed Edwards also had a dipping effort from 25 yards out that Farr did well to punch away from danger. A minute later Eleven guest player “Wolverine” nearly put the Boys in Blue back on top after he accepted Nick Moon’s square ball and danced into the area, only to see his shot from 15 yards blocked. The end-to-end action continued with Farr making two mores saves on Benedek Tanyi and Joel Lagunas around the 65th minute, the first on a 1-v-1 stonewall from 10 yards out.

Indy began to get back onto the front foot in the 70th minute when a corner kick by Ayoze was headed just over the crossbar by center back A.J. Cochran. Six minutes later, Moon was in the middle of the action again when he was brought down just inside the penalty area to set up another Eleven spot kick, which Ayoze deposited into the upper left corner.

The Spaniard nearly added another from the run of play a few minutes later off Wolverine’s layoff into the left side of the area, but the DCFC ‘keeper came up with a kick save to keep the visitors’ deficit at one. Indy added a third in the dying moments, however, as guest player Bluejay ran onto a pass by Ayoze at the top of the area and rounded the Detroit goalkeeper before slotting home a near angle finish to close out the scoring 30 seconds into stoppage time.