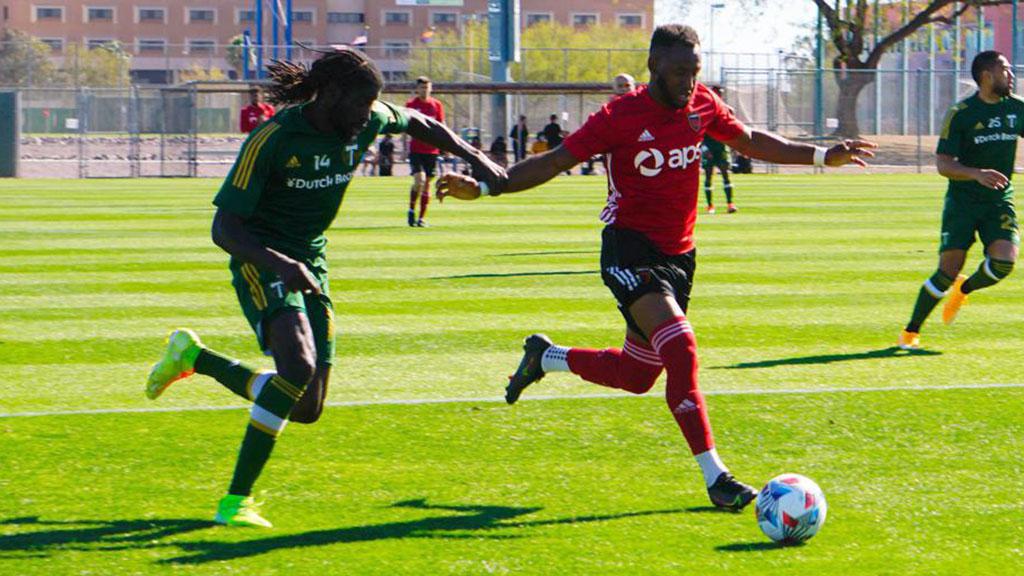 Phoenix almost grabbed an early lead as in the fifth minute a trialist took advantage of some sloppy play in the back from Portland. He recovered the ball in the Timbers’ third of the pitch and attempted to curl a shot from the left inside the right post, only to see it drift just wide. Moments later, Phoenix’s Darnell King got forward to take a hard shot from the top right corner of the area. The shot forced Portland goalkeeper Jeff Attinella to make a quality save.

Portland got on the board first in the 17th minute when Pablo Bonilla found Tega Ikoba in behind Rising FC’s back line. Ikoba picked up his head and knocked a shot into the left side of the net.

Rising created chances another pair of chances in the 10 minutes that followed, but finally found the breakthrough in the 34th minute. A trialist set up the play when he beat his defender down the right flank and centered from the end line. Quinn reacted first to the cross and made a sliding finish in the center of the penalty area to score the first goal for Rising this preseason.

After making wholesale changes, Phoenix started the second half on the attack when Rising Academy player Moises Mondragon worked his way towards goal and fired a long-range shot. Portland’s Attinella was once again up to the task. The goalkeeper knocked down the shot and smothered the rebound. Attinella was tested once again just moments later but made his third stop of the game in the 49th minute on an attempt by another Rising trialist.

Joey Calistri and Rufat Dadashov nearly found the back of the net for Phoenix, three minutes apart around the 55th minute. Calistri’s attempt sizzled just over the bar and Davdashov had his attempt saved by Attinella before Portland struck on the counterattack.

Just before the hour-mark, however, Portland regained the lead. Rising FC goalkeeper Zac Lubin made a save on a shot by Yimmi Chara, but the rebound fell into the path of Diego Valeri, who put away the rebound in the corner of the net to give the Timbers a 2-1 lead.

Zac McGraw then gave the Timbers a 3-1 lead just a minute later when Valeri swung a curling ball to the back post. The Portland defender beat his marker to the pass and headed a shot back across the face of the goal, giving Lubin no chance to make a save.