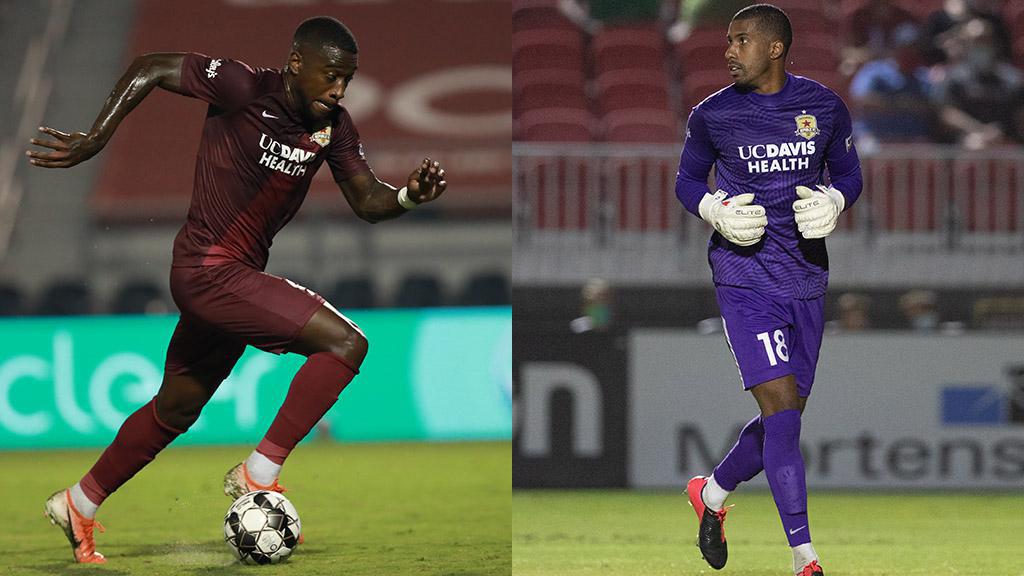 Sacramento Republic FC's Kharlton Belmar (left) has been selected by Grenada, while Rafael Diaz has been called up by the Dominican Republic for FIFA World Cup Qualifying later this month.

SACRAMENTO, Calif. – Sacramento Republic FC announced on Tuesday that forward Kharlton Belmar and goalkeeper Rafael Diaz have been selected by Grenada and Dominican Republic, respectively, as both countries begin Concacaf Qualifying play for the FIFA 2022 World Cup in Qatar. This marks the first World Cup Qualifying selection for both players.

“It is an honor to represent your country and we’re excited for Kharlton and Rafa to take to the international stage as ambassadors of our club,” said Republic FC Head Coach Mark Briggs. “We wish them both the best of luck and look forward to their return, as we prepare for the season ahead.”

Diaz returns to the Dominican Republic Men’s National Team after recently featuring in an international exhibition on January 25th against Serbia. Diaz posted a shutout against the country ranked 30th in the FIFA Rankings, building on a standout season for Republic FC. In 2020, Diaz posted an unbeaten 7-0-3 record during regular season play, and posted a save percentage of 75.7 percent, four shutouts and 0.79 goals-against average in the regular season and playoffs.

Belmar will seek his first senior appearances for Grenada after earning his call to the national team. The son of Grenadian parents, Belmar recorded one goal and a team-leading four assists for Republic FC in the 2020 Championship campaign. Previously the 2015 Championship Rookie of the Year with the Portland Timbers 2, the 28-year-old has recorded 43 goals and 19 assists in the Championship over the course of his career, and reached the USL Championship Final in 2017 with Sporting Kansas City II.

Concacaf’s First Round of Qualifying teams ranked 6-35, drawn into six groups of five. Each team will play four matches – two home and two away, facing each group opponent once. The matches will be played in the FIFA match windows – March 24-28 and June 2-8. At the end of the First Round, the six group winners will progress to the Second Round.

Diaz and the Dominican Republic will host Dominica at Estadio Olimpico Felix Sanchez in Santo Domingo on March 24 at 7 p.m. ET. They will travel to Miami to play Anguilla at Inter Miami CF Stadium at 6 p.m. ET on March 27.

Belmar and Grenada will open play against El Salvador at Estadio Cuscatlán in San Salvador on March 26 at 9:30 p.m. RT. Grenada will then host U.S. Virgin Islands at Kirani James Athletics Stadium in St. George's, on March 30 at 7 p.m. ET.