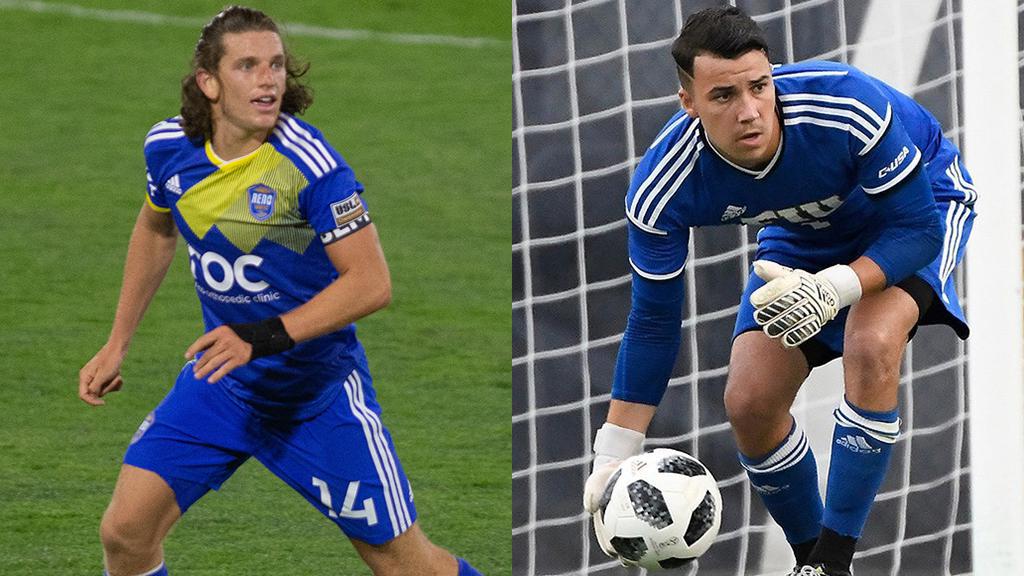 Midfielder Emilio Ycaza (left) and goalkeeper Hugo Fauroux have signed with Austin Bold FC ahead of the 2021 USL Championship season.

AUSTIN, Texas – Austin Bold FC announced on Wednesday the signings of midfielder Emilio Ycaza and goalkeeper Hugo Fauroux for the 2021 USL Championship season. Both signings are pending league and federation approval. Per club policy, terms of individual contracts will not be released.

“Hugo and Emilio are great additions to The Bold. Assistant Coach Ryan Thompson and Goalkeeping Coach Micahel Alcaraz first saw Hugo during his time at FIU and he left a lasting impression on them. He played with a high level of confidence with the ball at his feet and made some incredible saves. We knew he had the attributes to play at a higher level,” said Austin Head Coach Marcelo Serrano. “Thompson coached Emilio during their time at USF and spoke of his heart and work ethic. I liked what I saw from him when he was with Reno 1868 and his skills and values matched our identity.”

Ycaza spent the 2020 USL Championship season with Reno 1868 FC. The midfielder helped the Nevada-based club top their group and reach the Western Conference Semifinals. In 12 matches, Yzcaza tallied one goal and one assist. His sole goal against Tacoma Defiance won the USL Championship Goal of the Week for Week 13. In 2017, Ycaza joined the youth system of Swedish club IF Brommapojkarn before returning to his native Florida to play collegiately at the University of South Florida.

“I came to Austin Bold to win the league and bring the trophy home to the fans,” said Ycaza. “We have everything it takes to not only win the regular season but also go on and win the West.”

Fauroux joined Palm Beach Stars for the 2020 season after a successful stint with Norwegian club Valdres FK. The goalkeeper began his playing career with his hometown club, AS Cannes, before joining the youth academy of French giants AS Monaco. Fauroux came to the United States to play collegiately at Lake Erie College in 2015 and was named GLIAC Goalkeeper of the Year after a dominant season with eight shutouts.

After transferring to Florida International University in 2017, Fauroux continued to impress by anchoring the backline during their undefeated regular season.

“When I heard about the possibility to join the Bold family, I didn’t need time to think about it. It was a no-brainer for me. It’s a club that believes in opportunities and that’s what I needed,” said Fauroux. “I’m very grateful for Coach Serrano and Coach Thompson for believing in me and bringing me in. From what I heard, the atmosphere in the team is amazing and I can’t wait to be part of it.”