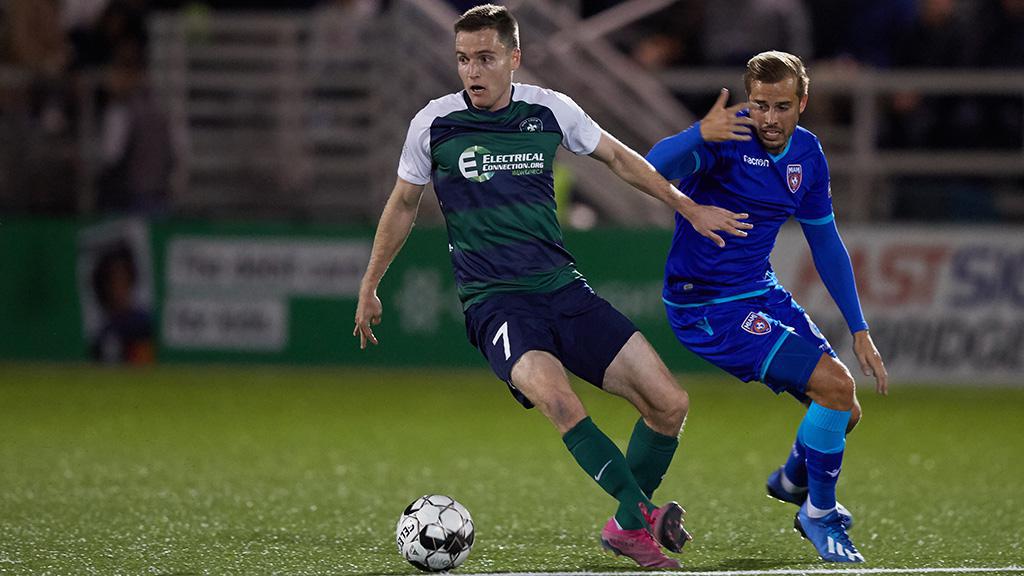 PITTSBURGH – Pittsburgh Riverhounds SC announced on Friday it had signed veteran midfielder Todd Wharton to a one-year contract with a club option for 2022, pending league and federation approval.

Wharton most recently played for Saint Louis FC in the club's final season in the USL Championship. He appeared in all but one match last season, as STLFC qualified for the 2020 Championship Playoffs on the final day of the season and reached the Eastern Conference Semifinals.

“Todd is a proven veteran in the USL. He brings a professional mentality and technical quality to the group and has been a versatile midfielder with all of his teams,” Hounds Head Coach Bob Lilley said. “We look forward to having his consistency and talent here in Pittsburgh for the 2021 season.”

Wharton brings five years of Championship experience, including his first three seasons with Rio Grande Valley FC from 2016-18 and the 2019 season with the Portland Timbers 2. With Rio Grande Valley, Wharton made 61 appearances and scored six goals in three seasons, and then notched six goals for T2 while appearing in all 34 matches for the Western Conference side in 2019.

Wharton entered the professional ranks after a successful college career at Virginia, where he was part of the Cavaliers' NCAA Championship victory in his junior season of 2014. A Richmond, Va., native, he scored 11 goals in 85 matches during his four years in Charlottesville but went undrafted in the 2016 MLS SuperDraft, leading him to sign with Rio Grande Valley as a free agent.

“Austin is one of the most liked and respected people in our club,” said SD Loyal EVP of Soccer Operations and Manager Landon Donovan. “In addition to being an elite goalkeeper, his leadership and love for SD Loyal make him an invaluable member of our team. We are thrilled to have him back in Torrey Green for our second season.”

Guerrero made two appearances and 11 saves during SD Loyal’s inaugural season, logging 180 minutes. He had two starts in front of goal, including a critical match down the stretch against LA Galaxy II while SD Loyal was in the middle of a playoff push. Growing up in San Diego’s Chula Vista, he played for Surf Soccer Club, a prominent youth development team, and was recognized as a top U.S. goalkeeper coming out of high school according to Rise Magazine. Prior to SD Loyal, the 31-year-old played for the Championship’s North Carolina FC and Reno 1868 FC after stints in Mexico with UANL Tigres, Altamira FC and Puebla FC.

“The opportunity to play in my hometown is an incredible blessing,” said Guerrero. “I’ve spent the last decade of my life playing in different cities and countries and my family always had to scramble to find a way to view matches. Having the chance to play in my own backyard and being able to look up into the stands to see the people who have supported me my entire life, is a dream scenario that I will never take for granted. I’ve never been more motivated or focused as I step into the 2021 season. I look forward to competing every day and continuing to fight with the boys towards our goal of bringing a championship to San Diego."

Sporting Kansas City II announced on Friday it had signed 21-year-old Dutch winger David Panka to the roster ahead of the 2021 USL Championship season. Panka will officially be added to the squad pending league and federation approval.

After spending a year with RKC Waalwijk’s U-21 side, the club’s youth team was disbanded at the end of 2019 which allowed Panka to continue his career in Poland with Miedz Legnica this past year.