From the Pitch - The Genesis 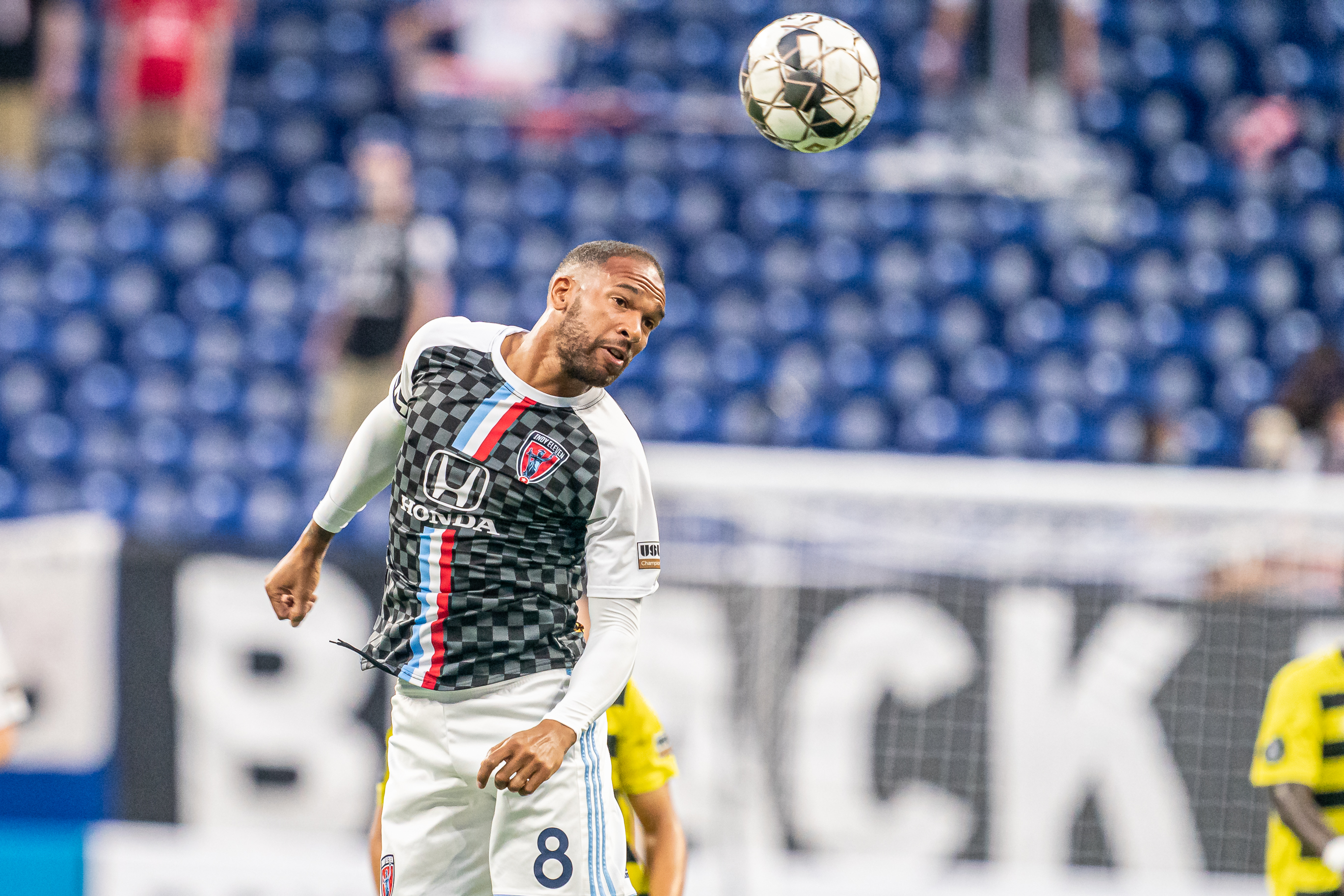 I am a product of football.

I was raised in a football culture, and while I have formed my own style, ideals and tendencies, they were absorbed from others that inspired me along the way. Instead of waffling on about myself, I thought a more interesting way to tell my story is through my biggest influences. 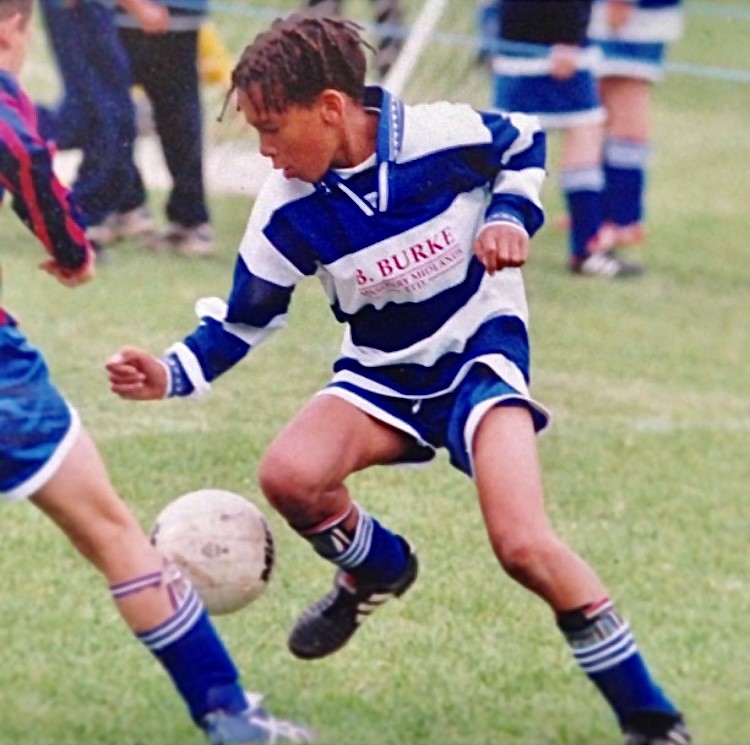 First, my footballing heroes: Ian Wright, the man who showed me the joy of football and the reason I wore number 8. Ronaldo (the OG version), power, pace, unstoppable-ness, the reason I wore mercurials most of my career. And finally, Thierry Henry, perhaps the classiest player to grace a football pitch, playing above the rest of the field.

These are my heroes, but I want to talk more directly about players who taught me in-person, guided me, and more than being great footballers, are also great people.

Marlon Walters — a name you probably don’t know. I signed for Wolves at 14, and in doing so went from my local Sunday league squad to Wolverhampton Wanderers, a massive leap. Being from Redditch, a small town, to playing with a team of city kids—some from Birmingham, some from Wolverhampton—was much different. They were street-savvy, more confident, and in particular, Marlon was confidence personified. He’d talk to anyone, literally anyone, no barriers, no fear. I remember walking to the train station and he would literally end up in 7 conversations with strangers along the way. I’d never witnessed anything like this, but it was a crucial moment in my growth both on and off the field. As a player, he was a vicious tackler, a true DM who you absolutely hated playing against. He gave me courage and strength and I think my years playing with him were important for me.

Joleon Lescott — a name you probably do recognize! I never played with Joleon as he was a first team player when I was in the academy but through our limited interactions the thing that really stayed with me was his humility. Having come through the academy himself I think he related to us as he was still young, but I remember finding it hard to wrap my head around that a player who was starting week-in week-out for the first team had so much time for us. My mum worked about an hour from Molineux and I remember once Joleon dropping me off to meet my mum in Birmingham. This was a big lesson in humility for me, seeing someone who was living all our dreams, still taking time out to make sure I got home is something I still carry with me.

Mike Burke — captain of Richmond Kickers during my first season. Also, the reason I nearly quit soccer completely after my first game! I had signed at Richmond after a trial, a night game, in which I was playing down the wing, earning a penalty that we scored in a 1-0 victory. I then came on as a sub after being baked for 60 minutes in the middle of a blistering day in Virginia.  I was trying to catch up to the pace of the game, catch my breath, move my legs. Burkey yelled at me “Don’t you want to play?!” I was mortified and I felt like I wasn’t good enough. But after acclimatizing and a stern talking to by my mum, I loved it there. Anyway, Burkey was the best player on the team, great first touch, dribbler and leader. I admired how seriously he took the game but also he didn’t hog the spotlight, he wanted us all to be successful. He wanted to win and it felt like it was never about him, it was always about the team.

Jun Marques Davidson—I love Jun, one of the greatest humans I have ever met and probably my greatest example of how to play the game smart. I truly believe you could put him on any team and he would be fine. His first touch, vision and simplicity are a true beauty to behold. He would be the first player I’d put on any team sheet, the player to glue everything together, fantastic in the locker room and the most humble person. 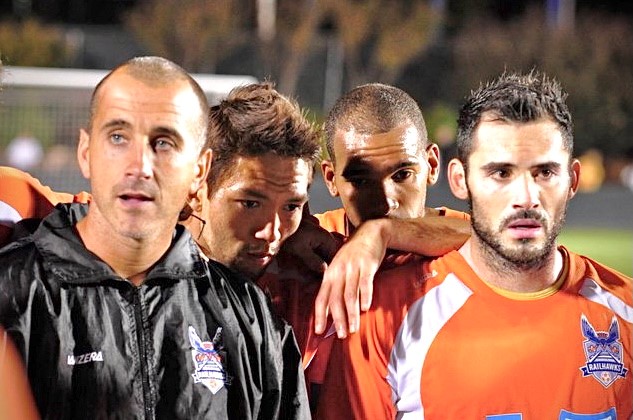 From JMD to JDM—Jay DeMerit. When I signed for Vancouver I have to admit I was ignorant to the American legend and the American game overall. I lived in my Premier League bubble and that’s the only reason I had heard of Jay. But I quickly realized playing with and especially CM right in front of Jay DeMerit is a dream. He literally talks to you the whole game loudly and clearly and l can’t say I ever played in front of a better centre back. I never had to check my shoulder, worry about positioning, track opposition midfielders into the back line. I was never more comfortable on a football pitch than with Jay behind me. Great leader on the field, great teammate off it. He is a legend for a reason and he taught me that communication is the key.

Can I include the whole Phoenix Rising 2017 squad? The best team I’ve ever been a part of from a chemistry standpoint. Where do I begin? Surely the USL has never produced a team with this much top-flight European experience before! From top to bottom just a team STACKED with personality. Peter Ramage was another true leader, a team player who spent time in the Premier League but as humble as anyone I’ve ever met. Shaun Wright-Phillips stood out because I never expected to see him slide tackling all over the place to regain the ball. He played with youthful exuberance and passion. Jordan Stewart was the heartbeat of the team, absolutely hilarious, but demanded high standards from himself and everyone around him. Dare I drop Didier Drogba on top of that?! I mean what more can I say? I was both thrilled to play with and terrified of Didier, he kicked the ball and it sounded like a cannon went off and, well, just google some of his free-kicks that year. In a constant battle for funniest player on the team with Jordan was Eric Avila, this guy had me in stitches. From the moment he joined I was hurting from laughing so hard at minimum once a day. Blair Gavin—what a footballer, what a humble guy, he didn’t get a lot of playing time but yet was the best player in practice almost every day in $20 Adidas cleats from Dick’s. Miguel Timm—aka the sauce master.  His first touch was immaculate, but also hilarious. I have to give a shout-out to Carl Wozscynski, AJ Gray, JJ Greer and Jason Johnson—my music aficionados right there. I’m missing some but this whole squad was amazing. Love you guys! 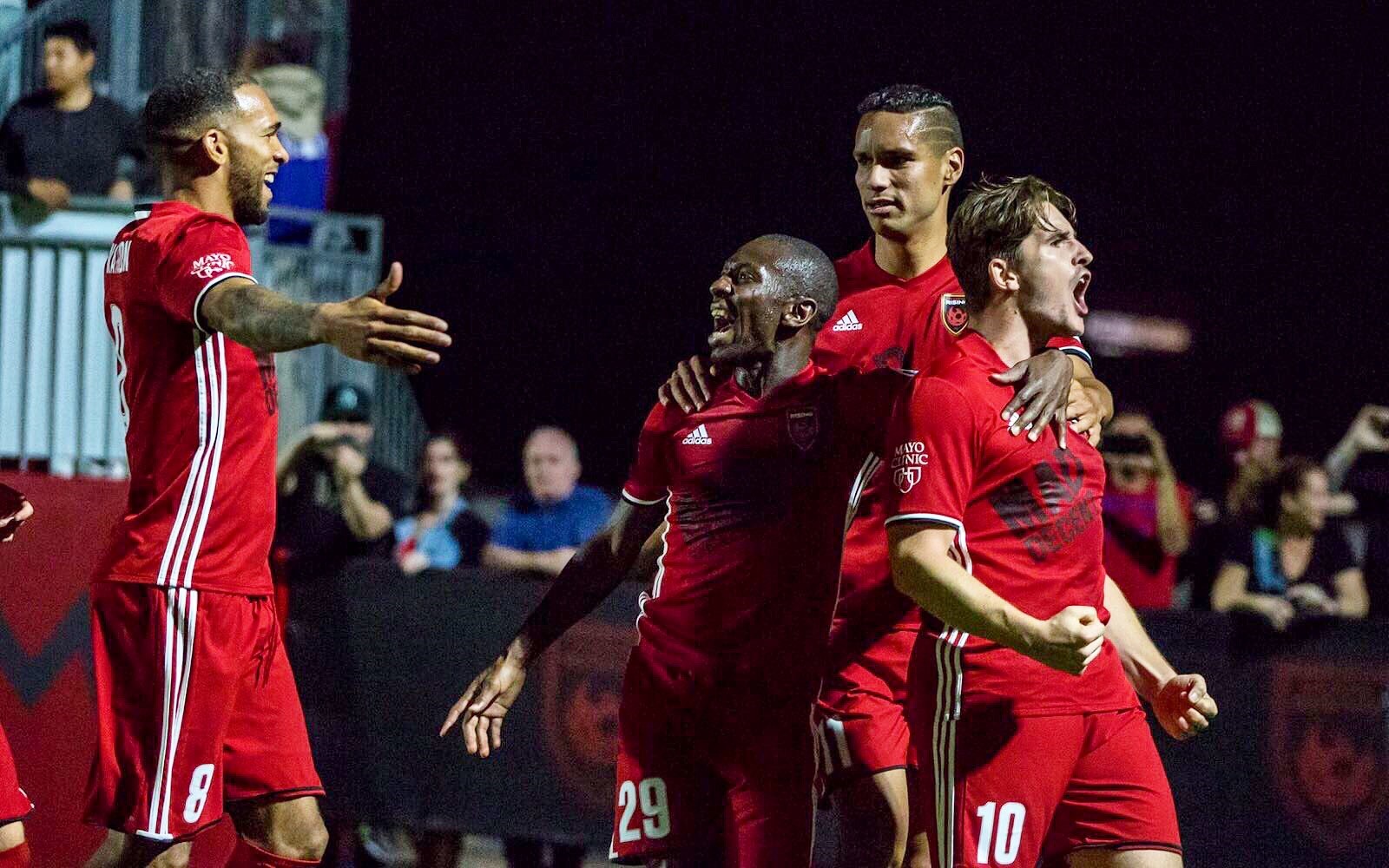 Ayoze Garcia Perez—first off what a footballer. WHAT. A. FOOTBALLER! If we’re being honest, he doesn’t belong on a turf field in Indiana but put him on any surface with a football and he’ll pull a rabbit out of a hat. Apart from that, this is a player that is an amalgamation of fantastic traits I’ve already mentioned. He plays for the team, loves the game, works hard and is still so humble. My captain even when I was captain.

Looking at the names here two main things stand out: Firstly, the methodology they compete with. They all seem to want others to be better around them to elevate themselves as opposed to pushing others down for an easier time of it. They all seemed to want to be the best version of themselves, not just the best on the team, and overall they knew their success was the product of us all being successful. The Nintendo Switch Mario Kart 8 Grand Prix tournaments we held on the flights to and from Phoenix were some of the most competitive you’ll come across in all the land. I remember players having to be coerced off of the plane because they were still in the middle of a lap!

Secondly, humility. I didn’t really belong on the field with some of these players, but I never once felt out of place. It didn’t matter who you were, they were always inclusive, they were and still are relatable… and more than anything just good, positive people.

There are probably 100 other players I could add here, but these are the outliers, the players that kept me going and inspired me to be better. I will carry the lessons I learned from them with me throughout the rest of my life. I think about all the young players I’ve come across in the past few years and I really hope I have left a positive imprint on them. I think, not just as players, but as people fighting to put food on the table, it’s very easy to get caught up in the self and becoming obsessed with paving your own way.

But as the sun sets on my own career, I hope I’ve led by example, competed with honesty and exemplified the same humility I witnessed along my journey. 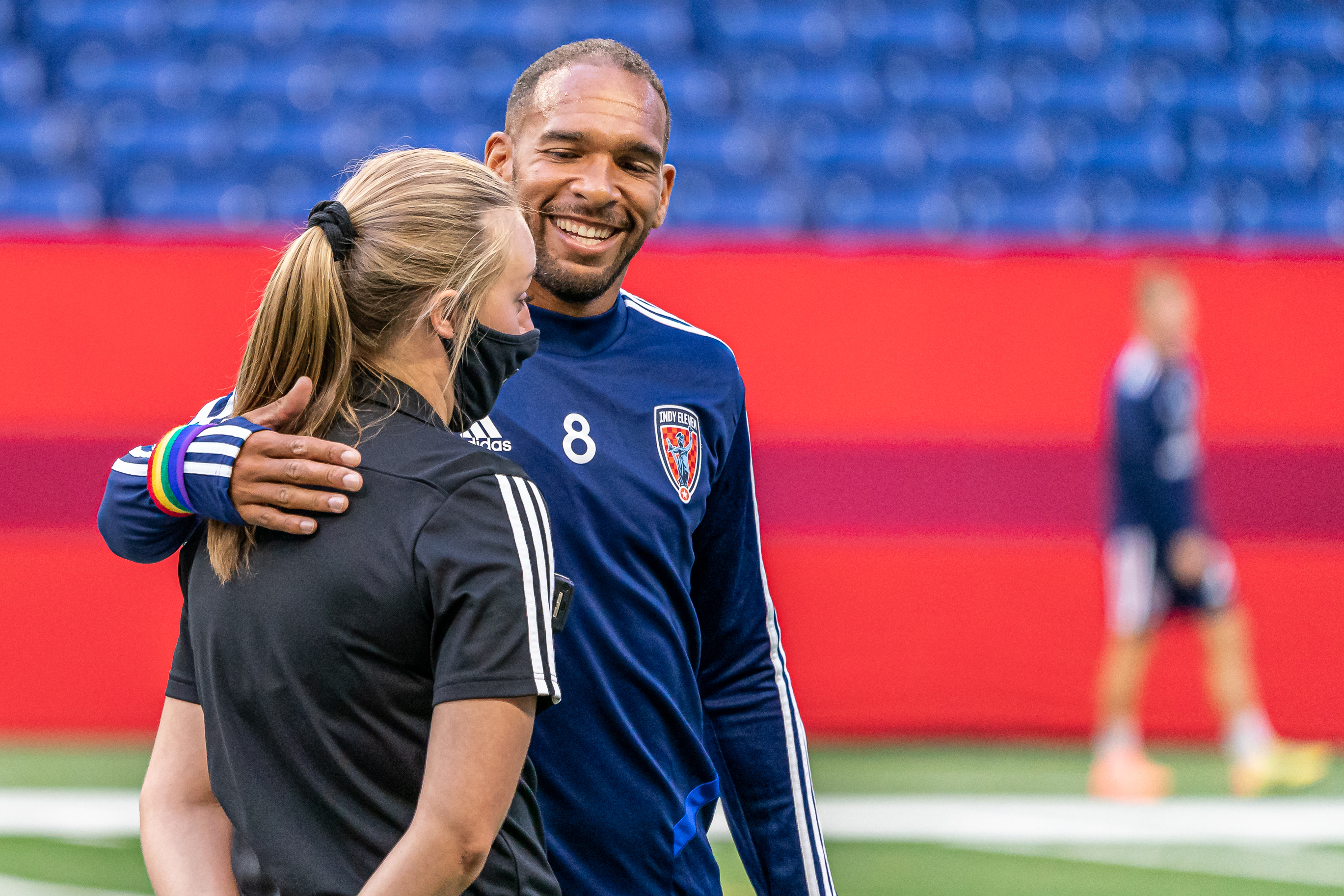