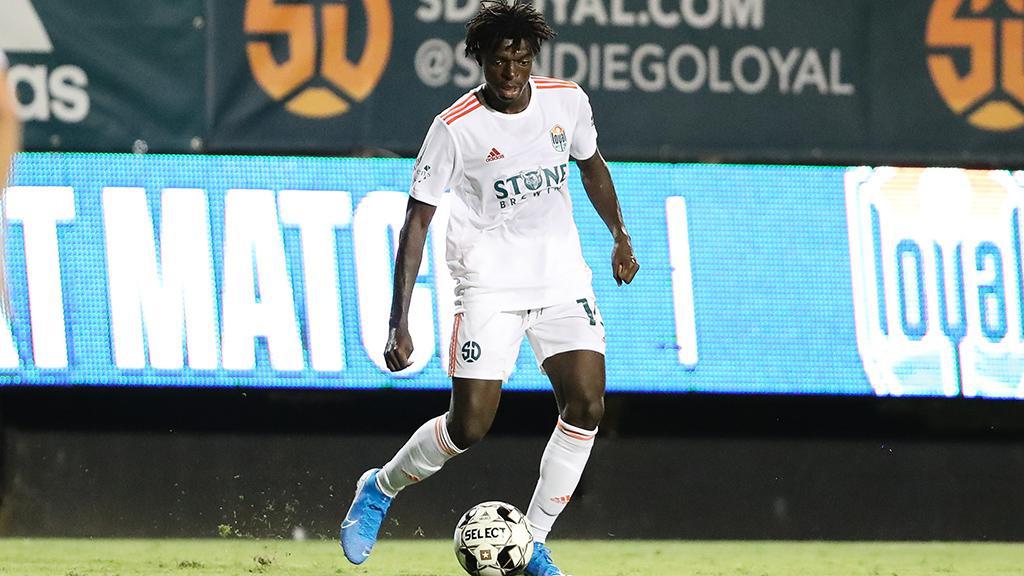 COLORADO SPRINGS, Colo. – Colorado Springs Switchbacks FC announced on Friday the club had acquired Beverly Makangila on a permanent transfer from MFK Vyskov in the Czech Republic, pending league and federation approval. Terms of the transfer were not disclosed.

“I want to thank Coach Brendan and the Switchbacks organization for this opportunity. It is an exciting time for football in Colorado Springs, I am so happy to join the club,” said Makangila. “I can't wait to meet my teammates and the fans, see you soon.”

Makangila is a central midfielder that most recently played on loan for San Diego Loyal in 2020. Last year, Makangila appeared in six USL Championship games for Landon Donovan's side. Prior to coming to the United States, Makangila played for FC Saint-Éloi Lupopo in Linafoot, the top soccer division in DR Congo.

“Beverly is a player that we have tracked for a few years now and it is a big win for us to acquire his services for the 2021 season and beyond,” said Switchbacks Head Coach Brendan Burke. “He had a good but limited introduction to the league last year in San Diego and we are excited to have him settle in Colorado Springs over the next few weeks and months. Beverly has all of the tools to succeed at this level and beyond and our hope is that he will compete for a place in our midfield immediately upon his arrival.”

Mensah has spent the last four years in the USL Championship, most recently competing for Pittsburgh Riverhounds SC where he made 17 appearances in the 2020 season and scored six goals to go along with a pair of assists. Mensah helped the Hounds go 11-4-1 and finish second in their group, advancing to the USL Championship Playoffs. He previously competed for Penn FC and Nashville SC, and overall has played 103 games, including 61 starts, tallying 26 goals and 14 assists in all competitions for USL Championship teams.

The Accra, Ghana native started his professional career in his home country with Inter Allies, scoring three goals in 19 appearances before heading to Penn FC on loan for the 2017 season. Mensah enjoyed the best scoring season of his career in Pennsylvania, leading the team with seven goals and two assists as Penn FC finished 11th in the Eastern Conference with a 10-15-7 record.

Following the conclusion of the 2018 season, Nashville SC opted to purchase Mensah from Inter Allies, making his loan move permanent. Mensah enjoyed another solid campaign in 2019 – Nashville’s final season in the USL Championship before joining MLS in 2020 – tallying seven goals and four assists in all competitions as Nashville went 20-7-7 to finish second in the Eastern Conference and third in the overall standings.

The New York Red Bulls II announced on Friday they had re-signed midfielder Kyle Zajec, pending league and federation approval. Zajec appeared in 24 matches over his two seasons with the club. He has amassed 1,685 minutes and has recorded four goals and one assist. The 23-year-old captained the club for the first time on July 17, 2020 against Hartford Athletic before he suffered a season-ending left foot fracture on July 26, 2020 against Pittsburgh Riverhounds SC.

“We are very happy to have Kyle [Zajec] back with our club for another year,” Red Bulls II Head Coach John Wolyniec said. “Before his injury, he showed the type of leader and player he can be, and we are excited to have him with us and to see him keep building those abilities.”

Prior to NYRB II, Zajec spent five years with Red Bulls Academy starting at age 13, he then went on to be a four-year starter at Georgetown University, where he played 62 matches and recorded five goals and nine assists. During the summer, he returned to Harrison to play for the Red Bulls U-23’s from 2016 to 2018.

“I am thankful to the organization for giving me the opportunity to continue my career with the club,” Zajec said. “I’m focusing on my rehab right now and I am looking forward to the new season and have many aspirations for 2021.”