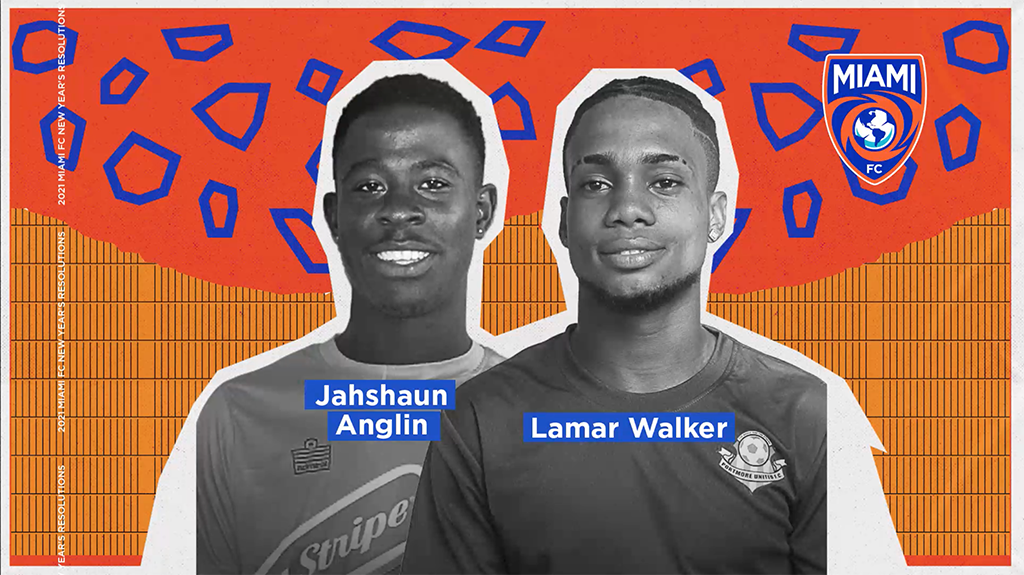 MIAMI – The Miami FC announced on Friday it had acquired forward Lamar Walker and midfielder Jahshaun Anglin, pending league and federation approval. Both players have recently featured for the Jamaican Senior National Team, while playing domestically in the Red Stripe Premier League, with Walker arriving from Portmore United FC and Anglin from Harbour View FC.

“Jahshaun and Lamar are two outstanding young players that we believe can flourish in our environment,” said Technical Director and Head Coach Paul Dalglish. “Both are already full Jamaican internationals who have ambition to play at the highest level. Lamar is a really creative player, fantastic 1v1 and has a really good eye for a final pass, while Jahshaun is a defensive midfielder with good athleticism and a really good range of passing.”

Born in Spanish Town, Jamaica, Walker played professionally for Portmore United from 2017 to 2020, making 28 league appearances and scoring five goals. The winger has also featured in three CONCACAF CFU Club Championship matches in their 2019 participation. Walker won the Red Stripe Premier League with Portmore United in back-to-back seasons (2017/18 & 2018/19). The 21-year-old has made six appearances for the Jamaican Men’s National Team, including being selected in the squad for their two exhibition games against Saudi Arabia this past November.

Originally from Kingston, Jamaica, Anglin made 21 appearances for Harbour View, recording two goals. His performances earned him a call up to the Jamaican Senior National Team, making his debut with the Reggae Boyz in March 2020 at the age of 18. Anglin was also part of Jamaica’s squad in its most recent friendlies against Saudi Arabia in November of last year.

Indy Eleven announced on Friday it had signed midfielder Gershon Koffie, pending league and federation approval. Terms of the contract that bring the 29-year-old Ghanaian midfielder to the Circle City will not be released, per club policy.

After beginning his professional career at the age of 15 in his native Ghana with International Allies (2006-09), Koffie began his North American journey in the sport by signing with Vancouver Whitecaps FC in 2010, the club’s final season before joining Major League Soccer. Koffie not only made the leap to MLS with the Whitecaps the following season, but he became a mainstay, leaving in 2015 as the Canadian club’s leader at the time with 133 career appearances (nine goals).

During that span, Koffie competed for current Indy Head Coach Martin Rennie, who managed the native of Koforidua, Ghana, in Vancouver for the 2012 and 2013 MLS campaigns. The industrious midfielder’s most productive offensive seasons of his now 15-year professional career came under Rennie’s watch, as he bagged three goals in both of his new head coach’s two full seasons at VWFC.

“We are very happy to add Gershon to our squad for the 2021 season. He is an excellent central midfield player that has many years of top-level experience in Major League Soccer and throughout the world,” said Rennie. “I am excited to work with Gershon again and I am sure he will add a lot to our team on the field as well as in our community.”

Sousa, who plays primarily as a left back, spent the last 18 months in Germany with Hamburger SV. He signed his first professional contract with the club in July 2019 and went on to make 14 appearances with the team's U-19s in the A-Junioren Bundesliga, tallying four assists. Sousa also made a pair of appearances for Hamburger SV II in the Regionalliga Nord – one in 2019 and one in 2020.

Sousa’s form saw him earn a call-up to first team training at Hamburg, currently in the 2. Bundesliga, and he played 90 minutes in a friendly against Braunschweig in October 2019.

Prior to his stint in Germany, Sousa played in the U.S. Soccer Development Academy for Sacramento Republic FC after joining from Ballistic United SC in 2016. In total, Sousa made 82 appearances in the USSDA, scoring 24 goals.