Hugh Roberts Is Just Getting Started

Independence defender reflects on a whirlwind year, in which he became one of USL’s leading voices on issues of social justice 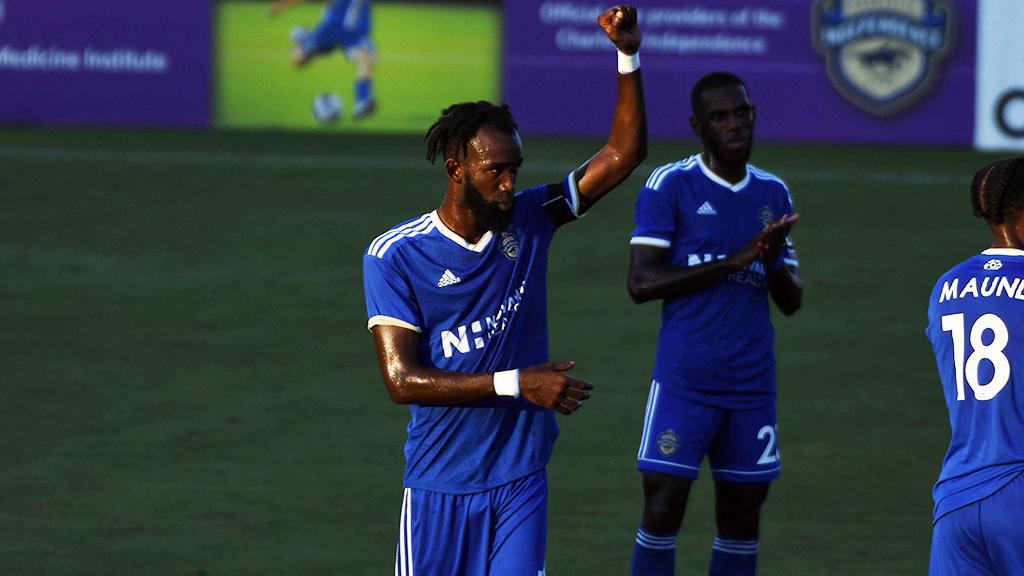 The past 12 months have been transformative for Hugh Roberts, in which he not only thrived on the field but also became one of USL’s leading voices on issues of social justice. | Photo courtesy Charlotte Independence

CHARLOTTE, N.C. – If you described what was about to happen in the next 12 months to Hugh Roberts last January, even he might not believe you.

“I was reflecting on that myself a couple of hours ago,” Roberts said this week. “I honestly never really could have imagined a year ago me being in this position at all.”

It’s been quite the personal journey for the former Championship All-League selection.

On the field, he helped the Charlotte Independence return to the Championship Playoffs for the first time in three seasons. That paled in comparison, however, to the off-field work Roberts and his colleagues in the USL Black Players Alliance undertook in the months leading up to and since its launch in August. The organization has already made a sizeable impact on the future of the USL through the creation of the USL Impact Committee and become prominent in the U.S. soccer community.

“Helping form the BPA, doing the whole movement where players are now kneeling within games, helping the USL create the Impact Committee,” said Roberts. “It’s really crazy how following your intuition and just going after what you want, speaking up and not really caring about what someone else is going to think about X, Y and Z, just to do what’s on your mind and in your heart.

“To receive love from that, of course it feels great too, but it shows that this was something I was called to do, and it just feels like something I’m supposed to do.”

That feeling is one that Roberts has carried with him for many years, with the challenge having been finding the time and opportunity to set off on the road he now travels. The combination of the suspension of the Championship’s season in March and the killing of Ahmaud Arbery while jogging near Brunswick, Georgia provided the spark.

This is Being a black man in this country, being killed because our hood is up getting candy or going on a jog for exercise on unarmed. Our lives are always at risk for simply being black. Is this equality? Could we live a normal life? pic.twitter.com/TYi4zppKJ0

“Right then was when I posted the video of me, being a black man, running through neighborhoods,” he said. “It really impacted me because I’m from the north, I moved down south to Charlotte, this is a new environment for me. Over quarantine we have to stay in shape as professional athletes, so I was going to jog through neighborhoods, I had to check my shoulders all the time and had some kind of paranoia now because of what happened to Ahmaud.

“I created that video, and when I created that video the USL reached out to me to do an article, different media outlets, and that viewership on [Instagram] and social media probably eclipsed 10k, 15k views. … From there, I was like, ‘I’m tired of doing the same one-on-one, or group episodes for Backyard Footy. It’s time to educate these people, especially as a Black player and the struggles I’ve been going through, why not get together 15 or 20 of my boys from USL and MLS together and talk about these struggles?’”

What resulted were two editions of Roberts’ Backyard Footy Podcast that brought the experiences of Black players in Major League Soccer and the USL Championship and League One into the spotlight. The dialogue it inspired was important, but in one instance it also achieved a tangible result for a player, club and community.

“All the big companies were putting up statements, and hiding behind their statements thinking they’re supporting us,” said Roberts. “Then [FC Cincinnati midfielder] Fatai [Alashe] hops on the show and says he’s still receiving the racially discriminatory messages in his DMs and still getting racial messages on all these things.

“That was probably the proudest moment I’ve had because it showed me 1. These statements aren’t good enough; 2. We go through these struggles and you guys don’t see it sometimes; and 3. It’s so important to speak up and use our platform to educate.”

The two editions of the podcast in June – Part 1; Part 2 – also laid the foundation for the formation of the USLBPA, which arrived in quick fashion in late August. The shutdown of the NBA Playoffs on August 26 when the Milwaukee Bucks declined to take the floor following the shooting of Jacob Blake and the resultant effect on other sports across the country triggered the decision to announce its formation publicly, which meant a tight timeline for Roberts and his colleagues and those at the USL who had been working on details from a league perspective.

“When the NBA shut down, the whole sports world shut down, so we were like ‘this is the perfect time for us,’” said Roberts. “We knew it was going to be last-minute, but we needed to be on the same page as the rest of the sporting industry. The one day when the NBA games shut down, we had a Zoom meeting with more than 100 black players from the USL, decided what we wanted to do protest-wise.

“It was tough, because it was last-minute, all of these clubs, more than 100 players, all these different ideas, so ultimately, we decided to give each individual club a way to protest, as long as it did something. It was honestly unique and unified, because we did something – we’re not as big as MLS, and they were in a bubble, so they had an advantage – but we did something in our own unique way where every club protested in some way.”

The impact throughout the remainder of the 2020 campaign was tangible and fed further Roberts’ belief that clubs may underestimate the power they have to create a broader impact in their local communities. That was present in the discussions Roberts and fellow Independence player and USLBPA Board Member Brandon Miller had with their club’s leadership on local initiatives it could lead and is now being seen in the initiatives being put forward at other clubs.

“A lot of times they sit on their money and make statements and think that by signing players and making sure their fans are happy is good enough, but they actually have power to make good, substantive change within their own communities,” said Roberts. “Going and doing this, it just showed me that these things need to keep things going, keep being on these coaches, keep being on these communities to enact change. We want these things to be enacted this season – we have to be realistic, if it’s one thing then that’s OK – and the Impact Committee is a great step, but we want to be on top of clubs and hold them accountable.”

One area in particular where Roberts is hoping to see changes in the near future is on the Championship and League One sidelines, where there remains a paucity of Black coaches in both leagues. Having only had one Black soccer coach since he was in middle school, Roberts was heartened to see the list of names that this offseason took the U.S. Soccer ‘C’ Coaching License course. He’s hopeful those players will get to follow the former Championship players now serving on technical staffs within the league – in some cases as Head Coaches – in the years to come.

“I was very happy to see that,” said Roberts. “I think that’s something that we want to do for all of our players as well, get them thinking about their post careers. We’re doing monthly Webinars where we have other Black influencers talk to USL players, it can be a financial advisor, CEOs in some organizations, but it’s very important because we need these coaches, we need to get our licenses and we need to show credibility because they always hold us accountable to certain standards.

“So, fine, we’ll prove that and show that and as long as we have those credentials, then you should give at least an interview, at least an opportunity.”

Personally, Roberts figures to be as busy this year as he was over the past 12 months. There’s not only the USL Impact Committee and initiatives the USLBPA is looking to implement with the league to take care of but individually he’s also working to expand his own influence through Backyard Footy. This week he launched a new initiative that will offer interactive guidance for children and parents looking to learn from him and fellow professionals on a variety of topics both on and off the field. 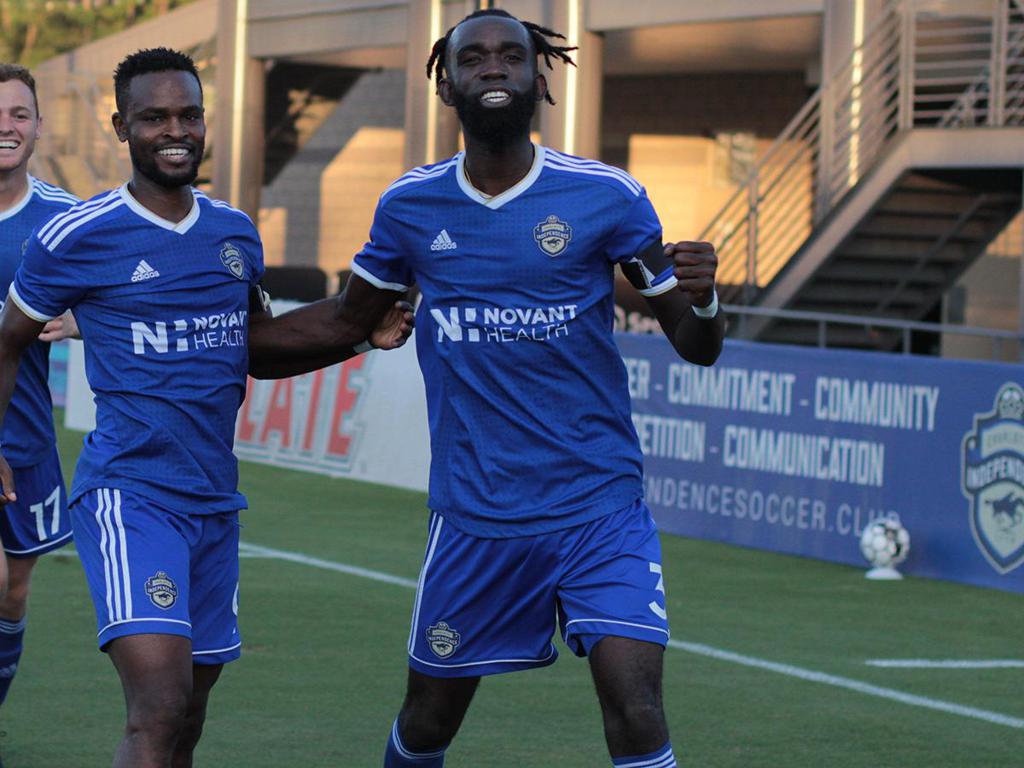 “Everyone’s on Zoom now with schools and this virus and I wanted to create a platform where kids and parents can learn from me and learn from other pros, guests I’m going to have on, and not just from my journey but other specific details like nutrition, academics, creating your own business,” said Roberts. “I coach a club team as well and parents ask me all the time, ‘how can my kid do this, this and this? How can they reach here?’, so why not create a platform where kids can sit on Zoom and ask me personal questions.”

Roberts is also hoping the USL and its clubs will start to reach the next generation of potential players and fans this year, laying it out as one of his goals for the next 12 months.

“These things are going to take time, and you want to be realistic with these things as well, but for me I would love to get initiatives enacted during this season, love to get more Black attendance where we can give free tickets for minority kids at games,” said Roberts. “It might be difficult to get free shuttle services for every community, but we need more Black attendance so they can understand how exciting and entertaining this game is, because it’s not really shown on TV like that, it’s not really shown on Social Media like that here domestically from that standpoint.

After the whirlwind the past 12 months delivered, Roberts is also ready to continue to lead the way.

“It’s just been crazy to see things come to fruition and have some hand in all of this, it brings tears to my eyes. I’m a 28-year-old, and I don’t even consider myself to be that old yet, but to be able to do these things now is life-changing.”