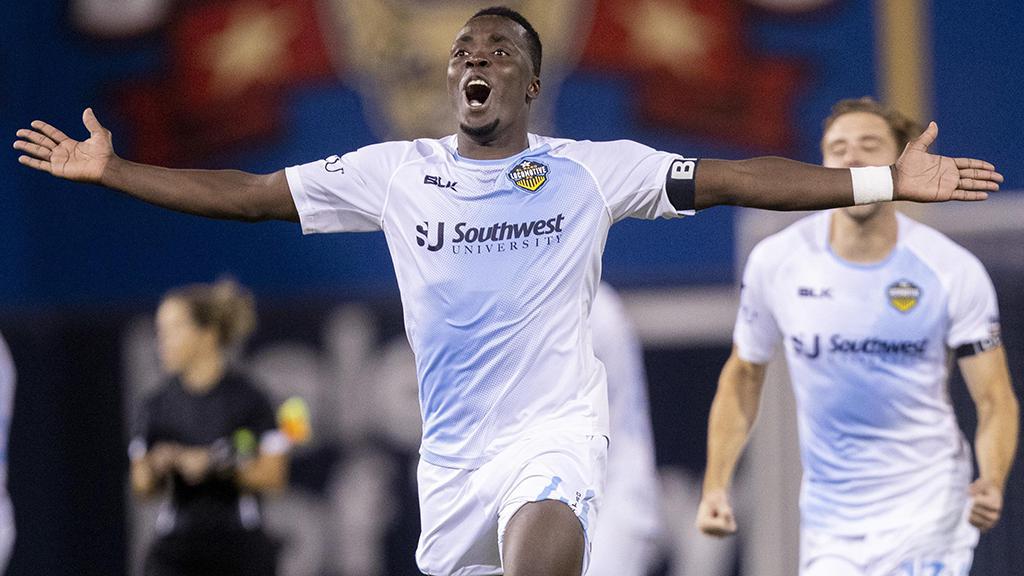 “I am thrilled to have Mechack back with us for another season,” said El Paso Head Coach and Technical Director, Mark Lowry. “It is no secret my admiration for him as a player and how highly we regard him. Last season, he went from strength to strength once we got going and he gives us everything we want in a center back. He is a standout performer on the field but is also equally loved and admired for who he is off the field. He is a selfless player, a person who loves his teammates, and will do anything to bring success to El Paso.”

Jerome played an integral part for Locomotive FC during the 2020 season, making 14 starts in 15 appearances. Slotting in as part of the staunch rearguard in the center back position, the Haitian international built off a successful 2019 USL Championship season where he helped lift Locomotive FC to stellar heights with a Western Conference Final appearance in the club’s debut year. Prior to joining El Paso, Jerome worked with Lowry at Jacksonville Armada while making 76 appearance with four goals on the Haitian National Team.

San Antonio FC announced on Thursday it had signed defender Axel Sjöberg for the 2021 USL Championship season, pending league and federation approval. Per club policy, terms of the deal were not disclosed.

“As a staff, we are delighted to welcome Axel back to the SAFC family,” said SAFC Head Coach Alen Marcina. “Axel brings extensive MLS experience, which includes an MLS defender of the year nomination. He is a natural leader, a great on-field communicator, and an asset on set plays. We are confident Axel will have an impactful season and will play a notable role in driving our team culture standards.”

Sjöberg returns to San Antonio after initially joining the club on loan from Columbus Crew SC prior to the start of the 2020 Championship season. The defender started the first game of 2020 for SAFC, playing 90 minutes in a 1-0 win over Real Monarchs SLC. Following the suspension of play due to COVID-19, Sjöberg returned to Columbus and was subsequently traded to D.C. United where he made two appearances during the remainder of the season.

Prior to 2020, Sjöberg spent the previous five seasons from 2015-19 with the Colorado Rapids of Major League Soccer. While with the Rapids, the 29-year-old made 92 appearances, compiling 7,827 minutes played while scoring three goals. His most successful season came in 2016 when he was named to the MLS Best XI after starting 35 matches between the regular season and playoffs, totaling 3,162 minutes played. The defender helped lead the Rapids to a record-setting 0.41 goals against average at home after conceding just seven in Denver that season. Following the 2019 season, Sjöberg was signed by the Crew off waivers.

“My girlfriend and I are very excited to be back in San Antonio,” said Sjöberg. “While we have a lot of hard work ahead of us, I believe last year was just a taste of what the team is capable of, and I can’t wait to join the group and contribute for a full season this time around.”

Hounds Add to Back Line with Preston Kilwien

Pittsburgh Riverhounds SC announced on Thursday it had signed defender Preston Kilwien to a one-year contract with a club option for the 2022 season, pending league and federation approval.

Kilwien is a third-year pro who played his first two seasons in the Championship with the New York Red Bulls II. As one of the team's primary center backs, he appeared in 36 of a possible 50 matches over the past two seasons, and he was third in minutes played for Red Bulls II in the 2020 campaign. He also scored his first professional goal on Aug. 13 last season in a 2-1 loss to Loudoun United FC.

In addition to his USL experience, the 24-year-old brings height to the Hounds back line at 6-foot-4, which makes him the tallest player currently under contract for 2021.

“We are excited to bring Preston on board for the 2021 season and are looking forward to working with him,” said Hounds Head Coach Bob Lilley. “He is an athletic center back that is comfortable on the ball, good in the air and a physical presence that is needed at this level.”

Kilwien played college soccer at Florida Gulf Coast University from 2015-18, and as a senior he was named the Atlantic Sun Conference Defensive Player of the Year. He helped lead FGCU to two Atlantic Sun championships and the second round of the 2016 NCAA Tournament.

A native of Lubbock, Texas, Kilwien holds dual citizenship with both the U.S. and Costa Rica. He spent part of his childhood in Washington state before graduating from high school in California. During his college years, Kilwien also played a season each with the Tampa Bay Rowdies U-23s (2017) and the Sounders FC U-23s (2018) in USL League Two before turning pro ahead of the 2019 season.