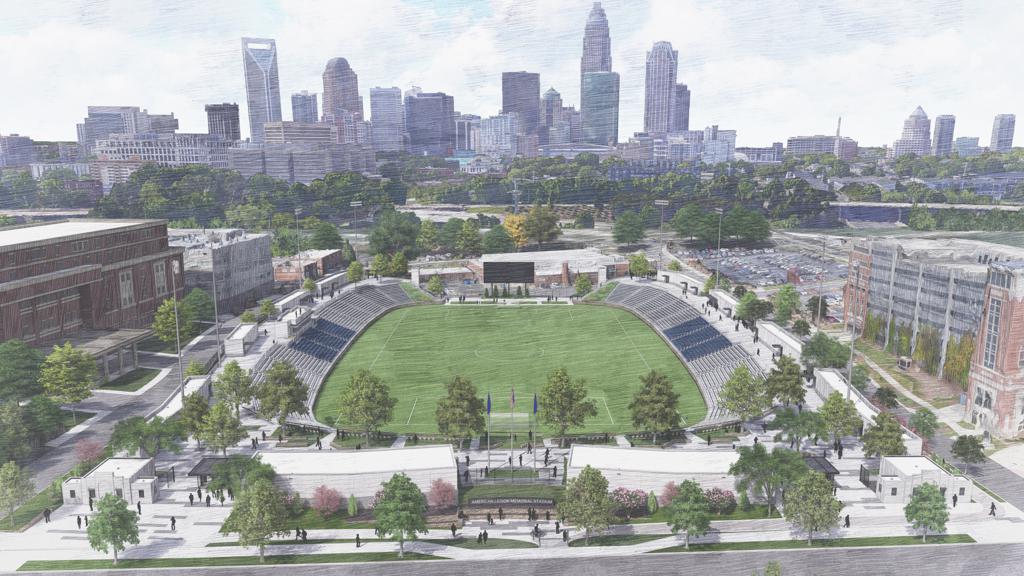 After a $40 million renovation, historic Memorial Stadium will become the permanent home of the Charlotte Independence in 2021 and kick off a new era for the club in the USL Championship.

CHARLOTTE, N.C. – Since the inception of the Charlotte Independence, the club’s long-term goal has been to call Memorial Stadium home. This year, that goal will finally become a reality.

The $40 million renovation of the historic venue which began last September is close to completion and is set to open a new chapter for the Championship side as it prepares for the 2021 season.

For the Independence’s Managing Partner and CEO, Jim McPhilliamy, the payoff has been worth all the work and collaboration with local agencies that has made it possible.

“It will be quite an accomplishment,” said McPhilliamy recently. “We have played in five different stadiums in the Charlotte area on our way to Memorial. That will make having a permanent home all the more fulfilling for our team and our fans. It should be among the best in the league going forward.”

The new venue is set to have a capacity of 10,500 including standing area, and the type of amenities that have become standard at new venues across the Championship in recent years. Among them, a first for the Independence, will be a full video scoreboard and views of the surrounding city that will make for a memorable experience on game-nights and at other events.

“The views of Uptown Charlotte from every seat are great – unmatched in any U.S. stadium big or small in my opinion,” said McPhilliamy. “Also, the way the venue has incorporated the Charlotte greenway system into its design is awesome – there are trees on the concourse. It will be among the best small soccer stadiums in the United States.”

New Year & A New Home. Bowl is poured. 2021 is going to be exceptional. “Maybe this year will be better than the last” - Counting Crows pic.twitter.com/0MifBbrGbO

The Independence’s arrival at its new home coincides with what has been an upswing in the club’s on-field fortunes in 2020. Charlotte reached the postseason for the first time since 2017 last year finishing on top of Group G in the shortened campaign and went to extra time against regional rival the Charleston Battery before seeing its tenure at the Sportsplex at Matthews come to an end.

The side already has a handful of key players set to return for the new season including two-time Most Valuable Player finalist Enzo Martinez and goalkeeper Brandon Miller, who in 2020 was voted to the Championship’s All-League Second Team and was a nominee for Goalkeeper of the Year. Also under contract are Valentin Sabella, who is currently out on loan in Mexico’s second tier with Cancún FC, and both Jake Areman and Junior Etou. McPhilliamy said the club is in discussions with other players from the past season to return and is hopeful of returning a strong core group under Head Coach Mike Jeffries.

Miller’s return to the Independence figures not only to be a big plus for the club on the field but also for the communities he and teammate Hugh Roberts have impacted in their time at the club. Both leaders in the USL Black Players Alliance, Miller and Roberts have become essential voices in the U.S. Soccer community and have helped establish new initiatives and opened new ideas for ways the Independence can create a positive impact across Charlotte.

“They are both tremendous forces for good in our organization,” said McPhilliamy. “Hugh, Brandon and others of our team made me realize how much more we could be doing. To say we were flat-footed on social justice at the outset in the Spring is an understatement. Our players and our fans called us out, and we listened, and we took action. I have always believed actions speak louder than words and we are trying to take more action in our community to make it better. Our aim is this year is to deliver a broader impact as we’ve had time to get out in front and plan some new things.”

On and off the field, the Independence are hoping that with a new venue comes new opportunity in 2021.