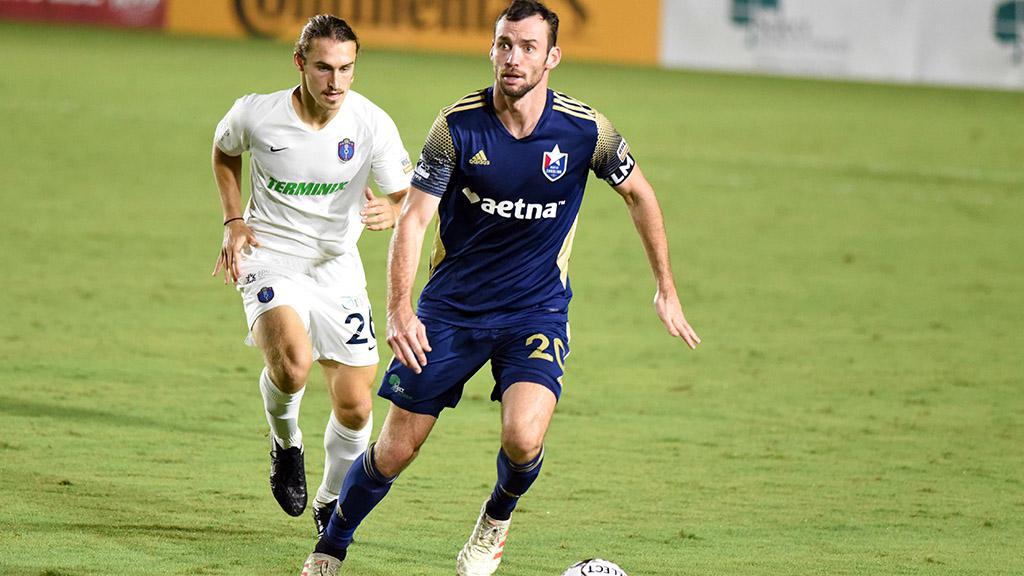 “Conor Donovan is a very, very good player,” said Energy FC Head Coach John Pascarella. “He’s a good center back with a good mix of qualities we were looking for. He’s very good in buildup play, he’s got good feet and range of pass. Defensively, he’s strong and physical and is good in the air and in the tackle.

“He’s also someone we needed to bring some experience in that area as well as vocal leadership, and I think he’s going to be able to help direct the defense. Him partnered with Mitch [Osmond] is going to be a very good partnering for us at center back. It brings some youth, some enthusiasm and some experience.”

A native of Fuquay-Varina, N.C., Donovan had stints with Major League Soccer’s Orlando City SC and Houston Dynamo FC as well as USL Championship clubs Rio Grande Valley FC and Pittsburgh Riverhounds SC. He has made 97 appearances in the Championship over his career.

Following one season at the collegiate level at North Carolina State, Donovan appeared at the 2015 FIFA U-20 World Cup for the United States U-20 National Team before signing a Generation adidas contract and being selected 22nd overall by Orlando in the 2015 MLS SuperDraft.

San Antonio FC announced on Tuesday it had re-signed midfielder and San Antonio native Ethan Bryant for the 2021 season, pending league and federation approval. Per team policy, the terms of the deals were not disclosed.

“We are pleased to have Ethan back with our SAFC family for another season,” said SAFC Head Coach Alen Marcina. “Ethan is a part of an important homegrown contingent on the roster. He is committed to his personal development and shows great learning and growth desire each day. Ethan is strong technically, demonstrates high football intelligence, and is a versatile player capable of performing in multiple positions for the team.”

After joining the club late in the 2020 season, Bryant made two regular season appearances. Bryant re-joined San Antonio FC last September after originally spending parts of the 2018-19 seasons with the club prior to moving to KSV Roeselare in the Belgian Second Division. In his first two seasons with San Antonio, Bryant appeared in 16 league matches, compiling 1,225 minutes played. The 19-year-old scored two goals and recorded three assists with the Alamo City club, while also appearing in two Lamar Hunt U.S. Open Cup matches.

Originally discovered by the club after participating in the SAFC Pro Academy’s Elite Training Program, Bryant trained with the first team under observation during the 2017 season prior to being added to the roster in 2018. The midfielder is the second-youngest player to debut for the club after he made his first appearance at age 16.

“I’m really happy to be re-signing with San Antonio FC,” said Bryant. “Soccer has been crazy this past year for me, but I’m grateful to have a club that believes in me. I am ready to get to work and represent the city.”

New Mexico United is thrilled to announce the signing of Albuquerque native Alex Touche, pending league and federation approval. Touche, who attended Albuquerque Academy, and played three seasons with USL League Two’s Albuquerque Sol FC before attending the University of Pennsylvania, will make his professional debut with his hometown club in the 2021 season.

“We are proud to welcome another talented New Mexican back home with our club,” said New Mexico United’s Head Coach and Technical Director, Troy Lesesne. “Alex is an intelligent defender that has the confidence to play out of the back under pressure. He has a presence about him on the field and I’m thrilled he’s joining us for his first year as a professional.”

Touche has spent the last three seasons at the University of Pennsylvania, where he has played in 44 matches, starting in 43. During that time, Touche was part of 14 clean sheets for the Quakers, and scored eight goals. He was named Quakers’ captain as a Junior in 2019 and was the Ivy League Defensive Player of the Year. Touche was selected to the All-Ivy League teams in each of his three seasons at Penn. In the summers, Touche competed for the Sol in League Two, where he made 23 appearances and scored three goals.