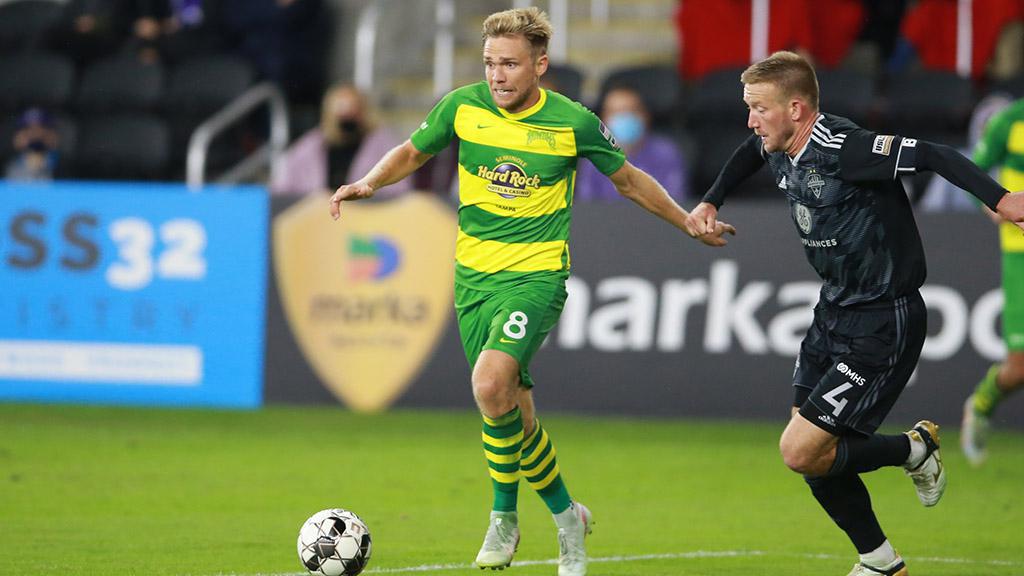 ST. PETERSBURG, Fla. – The Tampa Bay Rowdies announced on Tuesday the club had re-signed midfielder Zach Steinberger to a one-year deal. The signing is pending league and federation approval.

Steinberger was a fan favorite during the past two campaigns. During his career with the Rowdies, Steinberger has made 35 appearances and recorded five goals and six assists. On the field in 2020, Steinberger made only one goal, but that goal came in the Eastern Conference Final and was essential in securing the club’s 2-1 victory against Louisville City FC and the Rowdies’ first silverware in the Championship.

“Zach has been an integral part of moving the club forward the past two years, and I am delighted he will be able to continue building on all his hard work to date,” said Rowdies Head Coach Neill Collins. “Zach’s hard work was rewarded with excellent performances in the playoffs and, of course, who can forget his fantastic goal in the Eastern Conference Final. I hope to see more like that in 2021.”

Steinberger played his college career at Butler University, while also appearing for the Michigan Bucks in USL League Two at the same time. In 2014, Steinberger helped the Bucks claim the League Two Title, and was named to the League Two All-League.

He was selected with the No. 8 pick of the 2015 MLS SuperDraft by the Houston Dynamo and made three appearances for the club in his rookie season. He has also made 64 appearances in the Championship, recording nine goals and 10 assists overall across the regular season and playoffs.

“We’re building something special here in Tampa Bay, and I am very grateful to be a part of such a great organization representing an even greater fan base,” Steinberger said.

Merancio Lands with Hartford for 2021 Season

Hartford Athletic announced on Monday it had signed goalkeeper Carlos Merancio, previously of USL League One side FC Tucson, pending league and federation approval. Merancio becomes the ninth player and first goalkeeper signed by Hartford for the 2021 USL Championship season.

Merancio featured for Tucson during the shortened 2020 League One season as he started nine games, recorded 25 saves and posted two clean sheets. He recorded seven saves and his first clean sheet of the season in a 1-0 victory against South Georgia Tormenta FC on October 7th.

The 22-year-old, who came through the Academies of Liga MX clubs Monterrey and Morelia, is the second player Hartford has acquired from the USL League One ranks. Athletic defender Kevin Politz was acquired from Greenville Triumph SC before the 2020 season and appeared in 15 of 17 matches for Hartford during the past campaign.

Oakland Roots SC announced on Monday it had signed midfielder Memo Diaz ahead of the 2021 USL Championship season, pending league and federation approval.

Diaz joins Oakland after spending the past two seasons with hometown club El Paso Locomotive FC. The 25-year-old made 10 appearances during the 2020 Championship season as Locomotive FC reached the Western Conference Final of the Championship Playoffs for a second consecutive year.

A former standout at the University of Las Vegas – Nevada, Diaz recording a passing accuracy rate of 80.7 percent on 34.4 passes per 90 minutes last season and recorded one assist and four key passes.