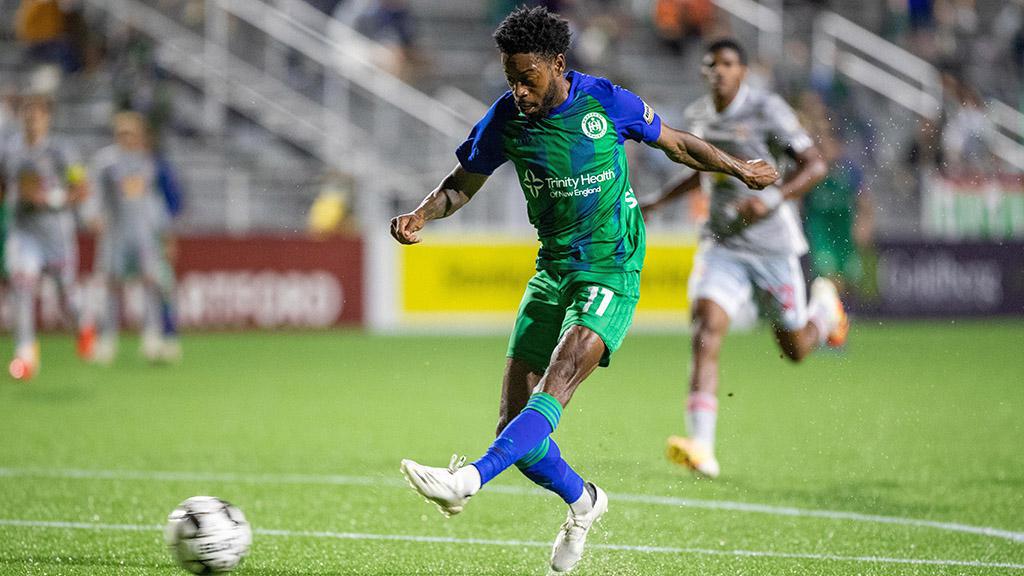 PITTSBURGH – Pittsburgh Riverhounds SC announced on Friday it had signed forward Alex Dixon to a one-year contract with a club option for the 2022 season, reuniting the veteran with Head Coach Bob Lilley in the Steel City. The signing is pending league and federation approvao.

Dixon provides another attacking option for the Hounds capable of playing on the wing or as part of an attacking partnership up top. The 30-year-old’s versatility is known to Lilley, for whom Dixon was an important piece in the Rochester Rhinos side that won the 2015 USL Championship Final.

“Alex is a dynamic player who has a good understanding of how to get into dangerous spaces,” said Lilley. “He can play multiple positions, can score goals, and will help provide leadership in the locker room. We are excited to have him in Pittsburgh for the 2021 season.”

Dixon spent the past two seasons with Hartford Athletic, scoring 11 goals in 42 appearances after becoming one of the first players to sign with the club prior to its inaugural Championship season in 2019. In total, Dixon has 37 league goals across six seasons in the Championship, which also saw him spend two seasons with OKC Energy FC.

A Texas native, Dixon first broke into the pro ranks by signing as a Homegrown Player in 2011 with the Houston Dynamo in Major League Soccer after a three-year college career at the University of North Carolina. He appeared in 13 matches for the MLS side and three more on a loan spell in 2013 with the Tampa Bay Rowdies, but his first regular action as a pro came under Lilley with 22 USL appearances for Rochester in 2014.

The Charleston Battery announced on Friday the club had re-signed goalkeeper Joe Kuzminsky for the 2021 USL Championship season. Kuzminsky will put on the gloves for a fifth year in the Black and Yellow after posting four clean sheets in nine appearances this past season.

The veteran shot-stopper returned to the roster midway through the 2020 season after a loan spell with Israeli Premier League side Maccabi Haifa. Kuzminsky didn’t miss a beat, making four saves in his 2020 debut as the Battery shut out North Carolina FC 3-0 and claimed a ninth Southern Derby title.

“I’m most excited about having more fans back in the stadium; it has been a long 2020,” said Kuzminsky. “We missed the atmosphere, the crowds, the energy that it brings. We want to bring a championship back to Charleston and the community.”

Kuzminsky finished the season with 25 saves on 33 shots faced along with four catches and seven punches in goal. The 26-year-old also earned his second consecutive Championship Save of the Year honor as his save during a late-season visit to Miami FC to deny former teammate Romario Williams earned the award.

“We are thrilled to welcome Kyle Adams to the Monarchs and Real Salt Lake organizational player pool,” said Real Salt Lake Assistant General Manager Tony Beltran. “Kyle is a well-rounded left footed center back, who we feel will not only complement the direction of our Monarchs roster but who will also, under the tutelage of our coaching staff, have the potential to make the jump to the first team.”

Adams has spent the past three seasons with fellow Championship side, competing for the Toros in the 2018 and 2019 seasons before signing with the Houston Dynamo for the 2020 campaign. Adams was loaned back to the Toros during the past campaign and has appeared in a combined 61 matches in the Championship overall.

After three years at San Diego State University, Adams signed as a free agent with the Toros. The young defender from New Zealand served as the captain during the 2019 campaign. In his three seasons Adams recorded 251 clearances and 89 interceptions defensively.