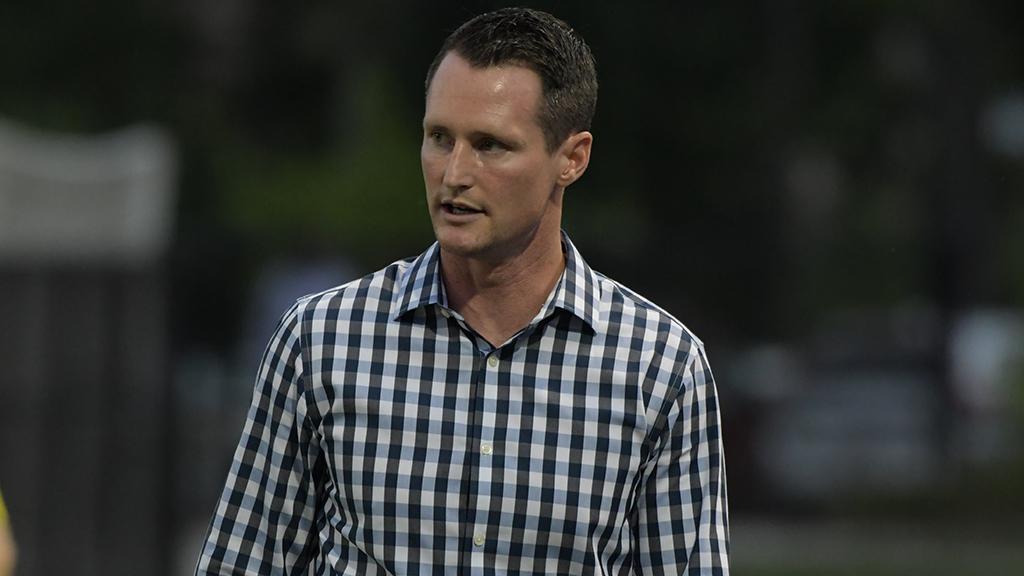 Brendan Burke arrives at Colorado Springs Switchbacks FC this offseason ready to lead the club into its new era, which he hopes will see club become a title contender in the coming seasons. | Photo courtesy Charlotte Independence.

Looked at a certain way, it’s easy to see the parallels between the paths of Colorado Springs Switchbacks FC and Brendan Burke.

For the Switchbacks, a playoff contender in their early seasons now preparing to enter an 8,000-seat downtown stadium in 2021, there is the feeling of regeneration for a club that is aiming to return to contender status.

For Burke, after more than a decade association with the Philadelphia Union that saw him help smooth the path in the USL Championship for now-members of the U.S. Men’s National Team, there is a new path forward for someone considered one of America’s bright young coaches.

That the two are united as we move into 2021, then, feels like an ideal match.

“The biggest attraction for me is as much as they’ve been in the league for the last couple of years, I really do feel like it’s a new club and a blank canvas,” Burke said recently. “They’re at an inflection point in their club’s history with the new crown-jewel of a stadium coming online downtown and at the same time I’m in a major inflection point in my own career, so I felt like it was a good marriage that way.”

Burke’s appointment in December came after the surprise resignation of Alan Koch, who last season had began laying what appeared to be a solid foundation in his first full season at the helm in Colorado Springs. Seeking a return to be closer to family in Canada, however, Koch elected to move on, leaving an attractive position vacant.

As both a colleague and friend – Koch and Burke took the USSF ‘A’ Coaching License together and had remained regularly in contact since – Koch’s suggestion to Burke he throw his hat in the ring to become his successor quickly set the wheels in motion for a potential hire.

“I had been in contact with [Alan] all year about the project, about the area, how much he liked living there,” said Burke. “I knew it was a little bit of an uphill battle when he took the job in terms of being able to compete right away, so we had talked through a lot of those things and when he left, I was one of the first people he called. We just connected on the circumstances around his departure and then it quickly shifted to, it might make sense for you to step in here.

“Around the same time, separately, [Switchbacks General Manager] Brian Crookham and I had sat on the Player Development Subcommittee for USL for the last five years, so Brian reached out as well, and I reached out to them. The writing was on the wall that it at least made sense for us to go down the road of exploring what it would look like for me.”

The timing for Burke was ideal, too. Having helped lead USL League Two’s Reading United AC – which established a partnership with the Philadelphia Union as it joined Major League Soccer in 2009 – to both success on the field across six seasons and the development of numerous players that now feature for the Union and elsewhere in the professional ranks, he was called on to become the first Head Coach for the Union’s Championship club – then known as Bethlehem Steel FC – as it joined the league in 2016.

Burke’s sides balanced the need to provide the club’s top young Academy prospects with talented draft picks such as Santi Moar and veterans like James Chambers that allowed the side to put a competitive product on the field. The club reached the USL Championship Playoffs in both the 2017 and 2018 season and reached the Eastern Conference Semifinals before being eliminated by Louisville City FC, which was on its way to a second consecutive title.

That season is Burke’s proudest accomplishment with the side now named the Union II, not only for the success the side achieved, but the platform it provided for the future of a handful of players. The two most notable are Brenden Aaronson and Mark McKenzie, both of whom earned MLS Best XI honors in 2020 as they helped the Union claim its first major silverware in the form of the Supporters’ Shield.

“I was actually getting texts from some guys around USL, coaches and whatnot, saying ‘I feel like I’m watching the old Bethlehem Steel team play, just now they’re doing it on the MLS stage,’ and it was like that,” said Burke. “You look at Mark and Brenden and Cory [Burke] all contributing regularly, Matt Real being a spot starter there, Olivier [Mbaizo] playing a big role, that’s half your team. Then the Reading connection is still on the field with Ray Gaddis and some others, it was a really proud moment for all of us.”

As proud as Burke was to see the success of his former protégés, it was equally so to see Jim Curtin at the helm. Close friends since working together in the Union’s Academy at the start of the last decade, Curtin has been a key influence on Burke’s own path in the coaching ranks. 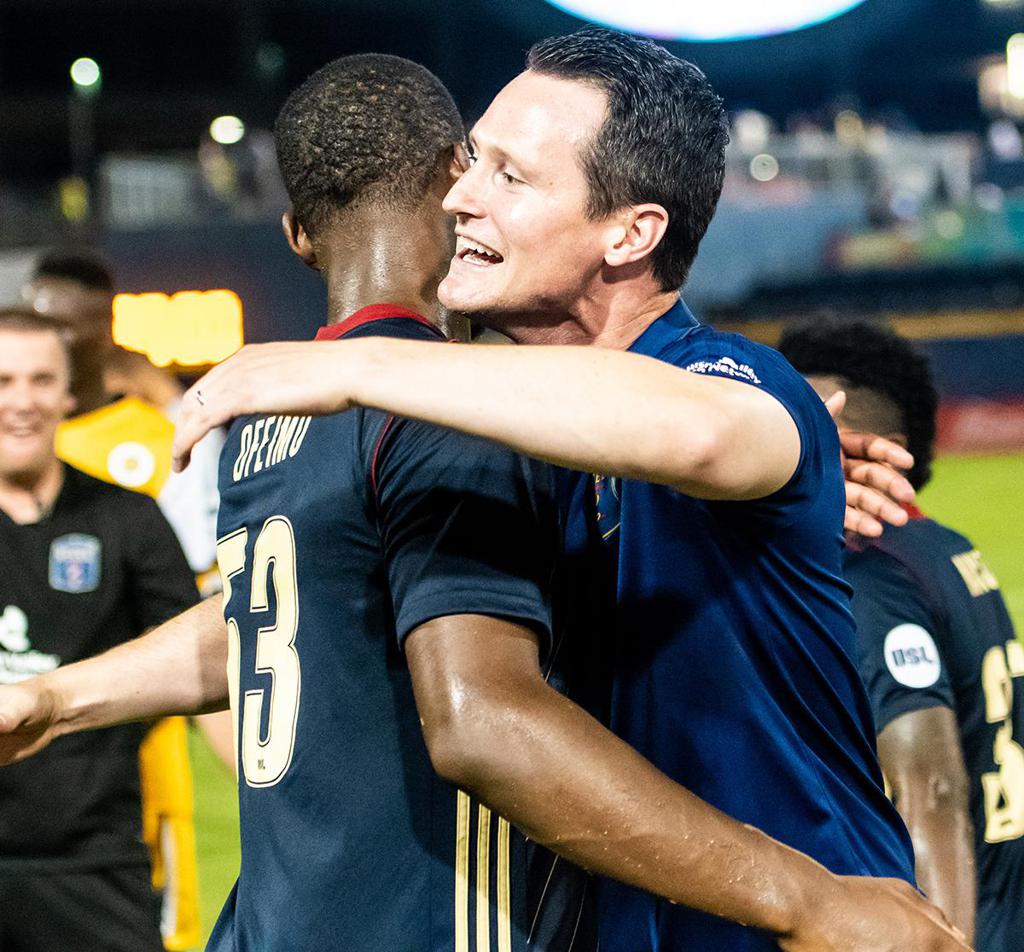 “That was really special for me,” said Burke. “[Jim] has been a great person to learn from and also work alongside. I’ve been really lucky to grow up as a coach with him. He’s the Head Coach of the MLS franchise and when they brought the USL franchise online, he called me right away and said, ‘I want you to do this.’ We had spent a ton of time together in the Academy and all that, so between the players and Jimmy accomplishing that, it was – as you can imagine – a very emotional time. It was is some ways 10 years of work culminating in that.”

That connection will remain. Burke said it still hasn’t quite set in that he’s not part of the Union’s set-up anymore given how close he and Curtin, Chris Albright and B.J. Callaghan – now part of Gregg Berhalter’s staff with the U.S. Men’s National Team – have remained.

But Burke is also excited about what his new position will offer, not only taking the lead at a club that seems primed for a resurgence, but that has seen some intriguing new pieces added this offseason. Burke has already been in contact with former U.S. Men’s National Team player Jose Francisco Torres and is eager to gain from his experiences in Liga MX and on the international stage – “I’m going to wring that sponge dry,” said Burke.

His aim, though, is to build a place where success on the field is also mirrored by success in building top young players that can use the Switchbacks as a launching pad for their futures in the game. After seeing Aaronson land at Red Bull Salzburg, and McKenzie also seemingly set to move to Europe this month, Burke hopes to unearth more that can follow in those footsteps, either to Switchbacks’ partner the Colorado Rapids, or beyond.

“I really want to make sure I maintain a reputation as someone who believes in young players and will give them opportunity to grow – and make mistakes along the way, but to grow – and develop into big, marketable players in the future,” said Burke. “Between Brenden and Mark and [Anthony] Fontana popping through the way he has, and Cory Burke, I want there to be four or five more stories like those in two or three years, but this time they’re going to come through Colorado Springs.” 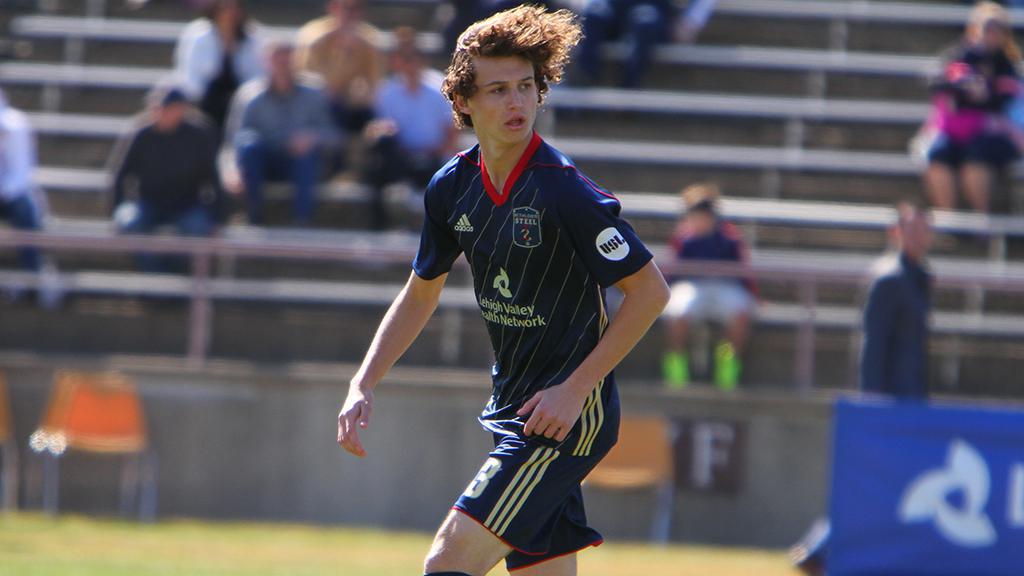 Success in Colorado Springs could lead to bigger things for Burke, too. Only 38 years old, he’s one of a number of exciting young coaches that could soon be candidates for Head Coaching positions in the top-flight.

But while that might be in Burke’s future, he’s ready to embrace Colorado Springs and the Switchbacks and lead the club to success in 2021 and beyond.

“I think for me it’s more about – and you even heard Caleb Porter talk about this in a few interviews this year, he’s certainly one we all look up to – I think it’s about completely submerging yourself in the environment that you’re in in order to have a chance to really get it right at the level that some of these guys have,” said Burke. “I look at it as an adventure we’re going on. We’re moving clear across the country for this one, we’ve not really spent much time outside of one MLS club, so this is a big departure and all our time, and energy, and focus is on making Colorado Springs a title-contending city.”