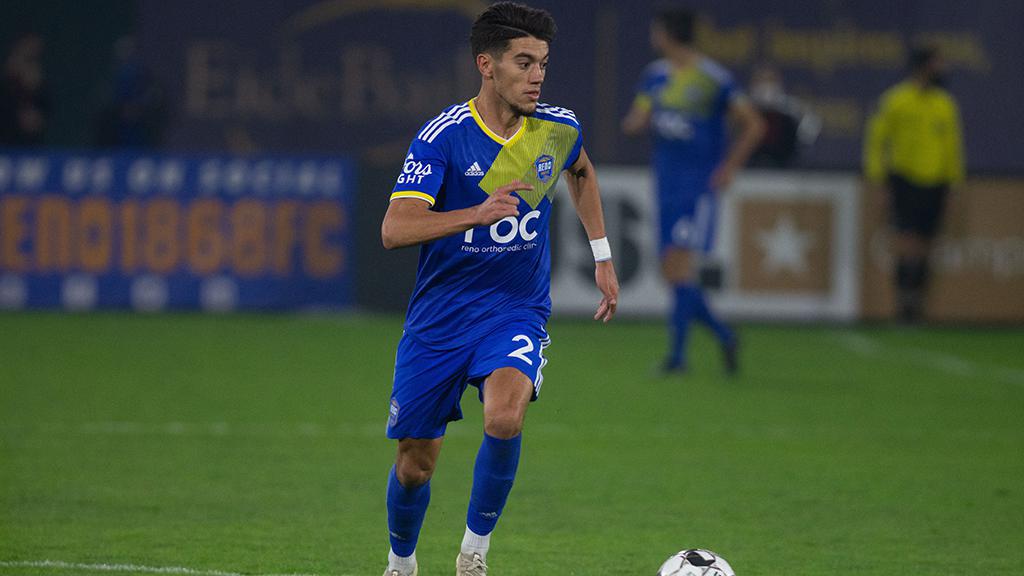 Former Morocco U-20 international Younes Boudadi has joined Hartford Athletic for the 2021 Championship season after competing for Reno 1868 FC in his first year in the professional ranks. | Photo courtesy David Calvert / Reno 1868 FC

Boudadi joins Hartford after spending the 2020 season with Reno 1868 FC. The 24-year-old made seven appearances, starting two, and won 24 of 27 duels, including a perfect 5 of 5 on aerial duels.

Prior to joining Reno, Boudadi played collegiately at Creighton and Boston College. As a Sophomore at BC, he led the team in assists. He later transferred to Creighton and was named to the All-Big East Second Team in his Senior season. He was drafted by Los Angeles FC in the Fourth Round of the 2020 Major League Soccer SuperDraft but did not sign with the club.

Boudadi holds Belgian and Moroccan citizenship, but his international experience has been solely with Morocco. He earned 11 caps with the U17 and U20 squads, including four matches in the 2013 U-17 World Cup where he helped Morocco reach the Round of 16.

FC Tulsa confirmed on Tuesday the return of midfielder Rodrigo Da Costa, who will enter the second year of his multiyear contract signed last offseason in the 2021 Championship campaign. Over the past two years, da Costa has quickly become a foundation for the club and will be a crucial piece of the midfield in 2021.

“Over the last three years I’ve experienced many changes within the club, from teammates to ownership,” said da Costa. “The way our season ended last year I couldn’t have been more proud of what we accomplished in the year. Returning to Tulsa means getting to continue to build with the club and get a second chance to finish our season stronger than the last.”

Despite being a constant on the pitch at ONEOK Field, da Costa has seen more change than most in the last two years of the franchise. New ownership, a new front office staff and a new brand were a part of the overhaul of the franchise during the 2019 offseason. Even the pitch alignment changed heading into 2020. However, now he will come back for Year 3, one of just four active FC Tulsa players to play three consecutive seasons for the franchise.

“It feels really good coming back for the third year,” said da Costa. “When I first arrived in Tulsa there was a huge lack in trust in the club and that has since then changed completely. I believe the new owners changed that and the fans can already see the difference. FC Tulsa is in a much better place today and my goal is to continue helping the club grow until we reach the top.”

The Tampa Bay Rowdies announced on Tuesday the club had re-signed defender Max Lachowecki to a one-year deal for the 2021 Championship season.

Lachowecki played for the Rowdies in 2018 with 16 appearances, including 10 starts. He took a hiatus from professional soccer in 2019 but returned to the Rowdies in 2020. He made two starts and played 11 games during the 2020 season.

“I am stoked to be returning to St. Petersburg for my third season with the Rowdies,” Lachowecki said. “I look forward to continuing to add to the winning culture, and as an organization, I know the Rowdies family will be ready to take our successes one step further in 2021.”

Before joining the Rowdies, Lachowecki played with Real Monarchs SLC for two seasons and helped guide the team to a regular season title in the 2017 campaign.

“Max’s versatility and leadership is why we were eager to see him return for 2021,” said Rowdies Head Coach Neill Collins. “Stepping up and performing like he did in the playoffs tells you everything you need to know about Max.”