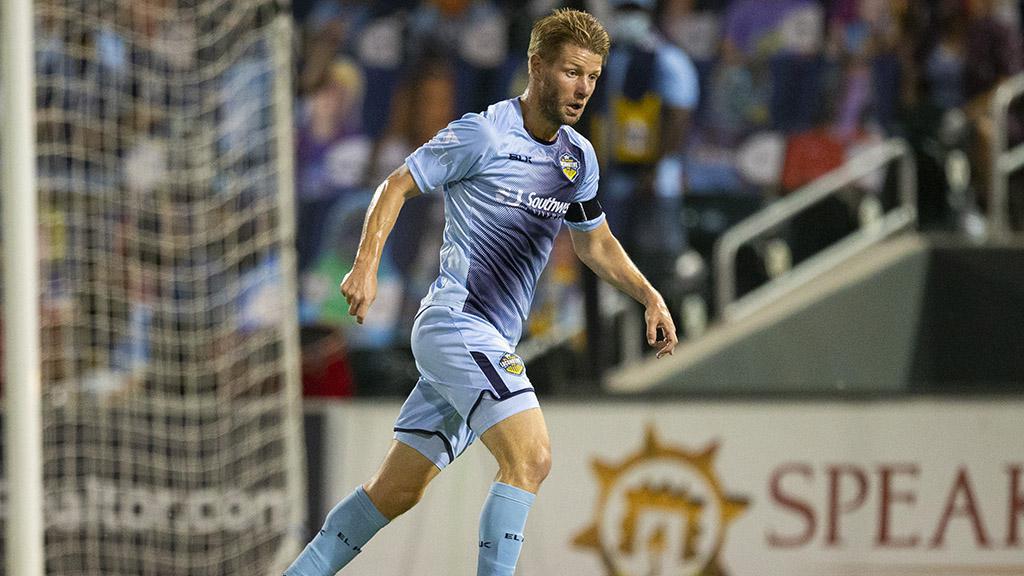 “Richie is the backbone of this team,” stated Mark Lowry, Head Coach and Technical Director of El Paso Locomotive. “On and off the field he drives our culture home every single day. He always puts his teammates first, the team’s success over his own, and that’s the hallmark of a true leader. He proved again last season how good of a No. 6 he is.

“He wants the ball in any situation, is always available, never gives it away but always seems to find a forward pass. He is the type of player and has the type of qualities that you still can’t replace in this league. He is priceless for us, and we expect that level again off Richie in 2021.”

Ryan joined Locomotive FC in January before the 2019 inaugural season, reuniting with Coach Lowry after the two had previously worked alongside each other at Jacksonville Armada in 2016. Since signing with Locomotive FC, the veteran Irish midfielder has aided the Sun City club with a level of leadership that few bring to the table.

Over the first two seasons with Locomotive, Ryan has helped lead the team to two back-to-back appearances in the Western Conference Final, pulling the strings from the defensive midfield with an 88 percent passing accuracy rate. Ryan came up big in crucial moments, converting from the spot in penalty shootouts against New Mexico United and FC Tulsa to help Locomotive FC advance in its historic second playoff run.

“I'm very excited to be back at the club,” said Ryan. “I've loved the two seasons we've had, and I feel like we got stronger last season on and off the field as a club. I want to try to help as much as I can to make it happen again and hopefully win the trophy that we've been so close to in the first two seasons. El Paso has been home for two years for my family and me. We are extremely happy to be back for our third year.”

“As a staff, we are thrilled to welcome back PC and his family to SAFC,” said SAFC Head Coach Alen Marcina. “PC played a vital part in our team culture and on-field success. His values, leadership, task execution on and off the ball, and overall commitment to the club and city are extraordinary. PC will continue to serve as a prominent figure in our team and our pursuit to compete for championships.”

PC was an integral member of the SAFC roster in 2020, appearing 14 of the club’s 16 regular season matches and recording 1,254 minutes of action. In addition to his goal and two assists, PC jointly led SAFC in key passes (23) while ranking second on the club in tackles (39). His play in the center of the field helped lead SAFC to a 10-3-3 record and place in the USL Championship Playoffs along with a league-best 11-game unbeaten streak, which tied marks also accomplished by El Paso Locomotive FC and Louisville City FC. The Brazilian added an 81.6 percent passing accuracy rate along with 16 shots over the course of the pandemic shortened season.

“I’m thrilled to come back to San Antonio,” said PC. “I know all the staff and although some of the team will change, I’m happy to play a second year here. Our goal is to build on 2020 and be even better to reach our objectives. I’ll give my all to help my teammates so we can get to the final and have better results than we did last season.”

“I couldn't be more excited to join the Switchbacks organization and play in the new stadium,” said Zandi. “I look forward to getting out to Colorado and helping the team continue to grow in any way possible. This is a great opportunity and I can't wait to get to work.”

Zandi is an attacking midfielder that made the jump to the USL Championship after having a successful college career at Villanova University. The Pennsylvania native recorded three goals and six assists in his first professional season with the Philadelphia Union II in 2019 and has made 34 appearances in the Championship overall.

“Zach was a captain for us at Reading United [in USL League Two] and an accomplished player in the Big East at Villanova.  He is dynamic in the way he plays and the way he thinks, and his work-rate and technique are excellent,” said Switchbacks Head Coach Brendan Burke. “His time at Union II drew attention from a number of clubs, many of which have reached out to us about him despite a significant amount of time missed due to injury this year.

“Zach will benefit greatly from playing with older and more established players on a regular basis now at Switchbacks FC and I won't be surprised to see him break out here. He is a good teammate and will be another great addition to the Springs community in general.”