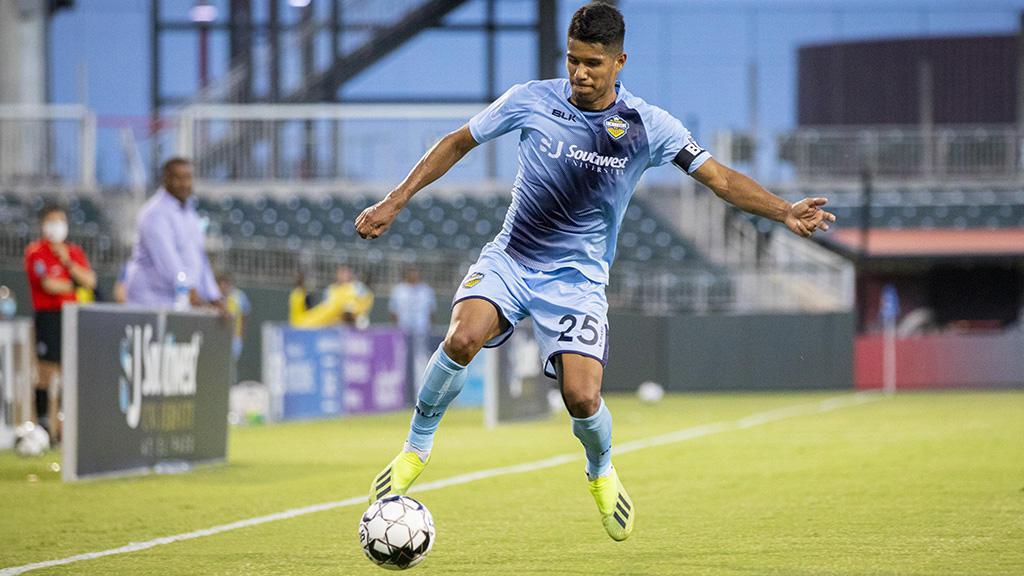 EL PASO, Texas – El Paso Locomotive FC announced on Tuesday it had re-signed midfielder Bryam Rebellón to a new two-year contract that will keep the 28-year-old Colombian with the club as it enters its third season in 2021. The new contract is pending league and federation approval.

“I have a wonderful relationship with Bryam, one that transcends the game, and I am so happy to be working with him again,” said Locomotive FC Head Coach and Technical Director Mark Lowry. “From an understanding and mentality standpoint he is everything I want in a player; whatever position he plays he elevates the team and gives nothing less than 100 percent every single day. I can’t wait to see how he pushes himself again and develops even more in 2021.”

Rebellón made an impact for Locomotive FC in 2020, scoring the game-tying goal against Phoenix Rising FC in the 59th minute of the Western Conference Final of the USL Championship Playoffs. The goal reignited the fight for Locomotive FC, ultimately sending the match to a penalty shootout. In the club’s second season, Rebellón proved adaptable to fit the team’s needs, moving to a more offensive role higher up the field. Carrying with him experience from the Colombian and Argentinian football leagues, Rebellón continues to add to the world-class level of soccer offered by El Paso Locomotive.

“I’m extremely happy to be re-signing with Locomotive FC,” said Rebellón. “We’ve made it to the Western Conference Final two years in a row. Everyone wants to be part of a team that goes to the finals. Unfortunately, we haven’t been able to lift the trophy, but we have been there and that says a lot about the team and how we play. I’m extremely happy to be here.”

The Charleston Battery announced on Monday it had exercised its contract option to retain Angelo Kelly, who will return for his fourth season at the club in the 2021 Championship campaign.

The central midfielder was one of just four players to appear in all 17 matches during the shortened 2020 season for the Battery while making 15 starts and logging 1,414 minutes. He proved his versatility on both ends of the pitch in 2020, notching three assists, tied for team lead, and leading the midfield in interceptions (19) while creating 14 chances.

A native of Honduras, Kelly has made 65 appearances and recorded 4,938 minutes of action for the Black and Gold in his career after competing in USL League Two for both the Odessa/Midland Sockers and Mississippi Brilla. Kelly has recorded seven assists all-time for the Battery, while also recording 104 interceptions, winning 74 tackles and posting a passing accuracy rate of 81.6 percent.

The St. Vincent and Grenadines native made 11 appearances while earning five starts during his first professional campaign this past season. Edwards finished the 2020 season with three consecutive goals in the final three matches of the campaign – beginning with the 6th-minute tally in the Toros’ 4-2 victory against OKC Energy FC on October 3.

The 23-year-old brings international experience to the Toros with 15 senior caps for the St. Vincent and Grenadines National Team. Edwards debuted in a 4-0 win over Anguilla on Sept. 5, 2014 in the Caribbean Cup Qualification tournament. The forward finished with a game-winning assist in his last appearance with the National Team, a 1-0 victory over Trinidad and Tobago on Aug. 11, 2019.