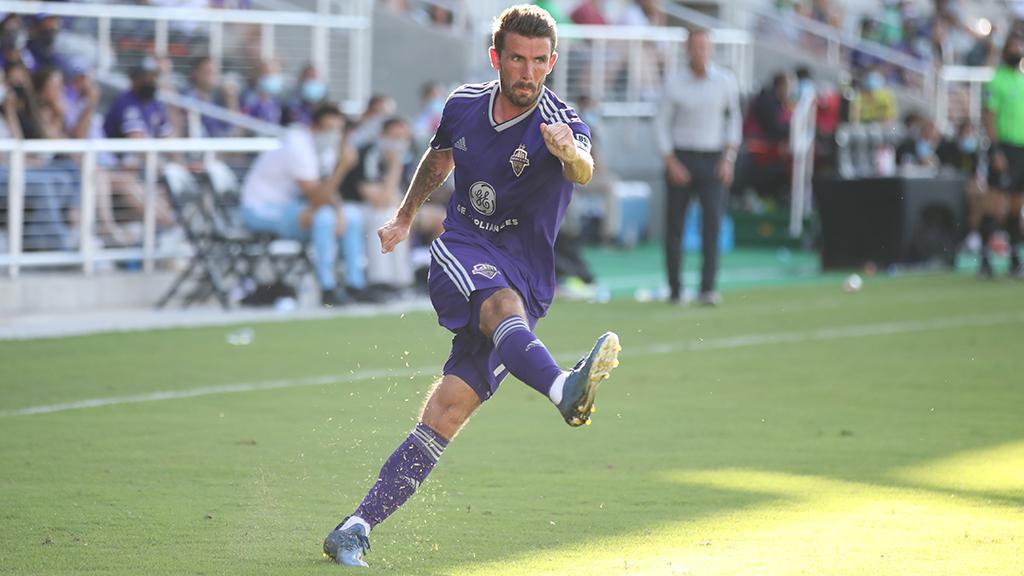 Louisville City FC's Niall McCabe has played the most games in the club's history, appearing in 143 contests since his debut in 2015 Championship season. | Photo courtesy Em-Dash Photography / Louisville City FC

LOUISVILLE, Ky. – The longest-serving player in Louisville City FC’s roster, Niall McCabe, will continue his decorated professional career in purple having agreed to a new contract, the club announced Tuesday.

Pending league and federation approval, the deal returns a versatile midfielder who leads LouCity all time with 143 USL Championship appearances, during which he has tallied 18 goals and 23 assists.

“Niall is so important to our club and being able to re-sign him to another contract is fantastic,” said LouCity Head Coach and Sporting Director John Hackworth. “While his contributions on the field since day one are amazing, it is Niall’s strength of character that sets him apart.”

McCabe’s impact at LouCity has been both immediate and longstanding. He played in all 28 games of the club’s inaugural season, tallying four goals and two assists. The boys in purple advanced to the Eastern Conference Final, a feat they’ve replicated every year since while winning USL Championship titles in 2017 and 2018.

A native of Dublin, Ireland, McCabe became the first LouCity player to reach 100 appearances for the club in 2019. Off the pitch, the 30-year-old has made Louisville an adopted home, marrying his wife, Ashleigh, that same year. The two are raising a pair of children, son Luca and daughter Charlotte.

“I’m obviously really happy to be back again next year,” McCabe said. “It’s a privilege to be able to play here at this club and something that should never be taken for granted. This team has so much to offer. I think with this squad and the players we have we will accomplish great things in the future.”

McCabe appeared in five games during 2020’s abbreviated season before shutting down to rehab a surgically repaired foot. At the time, he was a crucial part of LouCity’s attack, completing 70 percent of his passes in the opponent’s half of the pitch.

Able to return quickly from a 2016 operation to repair hip cartilage, the resilient McCabe likewise found himself back available quickly last season as a substitute during LouCity’s recent playoff run.

"It was a crazy year for everyone but especially for me," McCabe said. "it left me hugely motivated with a chip on my shoulder coming into next season."

“I’m looking forward to seeing a healthy Niall in 2021 as we push toward another USL Championship,” added LouCity Assistant Coach and Technical Director Danny Cruz. “His character and winning mentality are so important to what we do on a daily basis.”