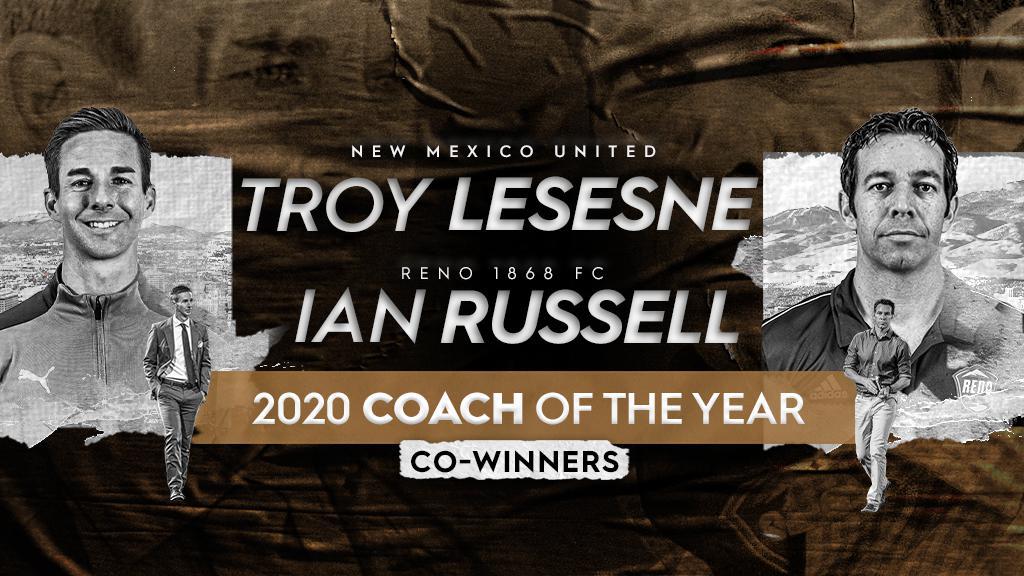 New Mexico United’s Troy Lesesne and Reno 1868 FC’s Ian Russell were named Co-Winners of the 2020 Championship Coach of the Year award on Thursday after each leading their clubs to success throughout the regular season of the past campaign.

In the case of Russell, success meant leading 1868 FC to the best record in the Championship for the first time in its history, and individually becoming the second-fastest Head Coach in the league to reach 60 victories, accomplishing the feat in just 112 regular season games. Appointed Reno’s manager before its inaugural season in 2017, Russell’s 2020 squad continued to play an exciting, attacking style that saw it finish tied for the league-lead in goals and suffer only two regular-season defeats.

For Lesesne, success came in the form of leading New Mexico United to a second consecutive postseason berth despite playing the entirety of the club’s 2020 schedule outside the state of New Mexico. Not only that, but Lesesne’s vision for United in its second year took a noticeable step forward which earning results on the field, particularly in the defensive end where the club’s goals-against average shrank by more than half-a-goal to 1.13 goals-against per game.

In the closest vote in Championship Awards history – where 15 different Head Coaches overall received votes – there was nothing to separate Lesesne and Russell in the final tally. The duo finished even on 14 percent of the ballot, while Louisville City FC’s John Hackworth finished third on 13 percent.

The 2020 USL Championship Awards were voted on by team technical staffs and executives and a league-wide media panel that included representation from every USL Championship market. Voting was conducted following the conclusion of the 2020 Championship regular season.