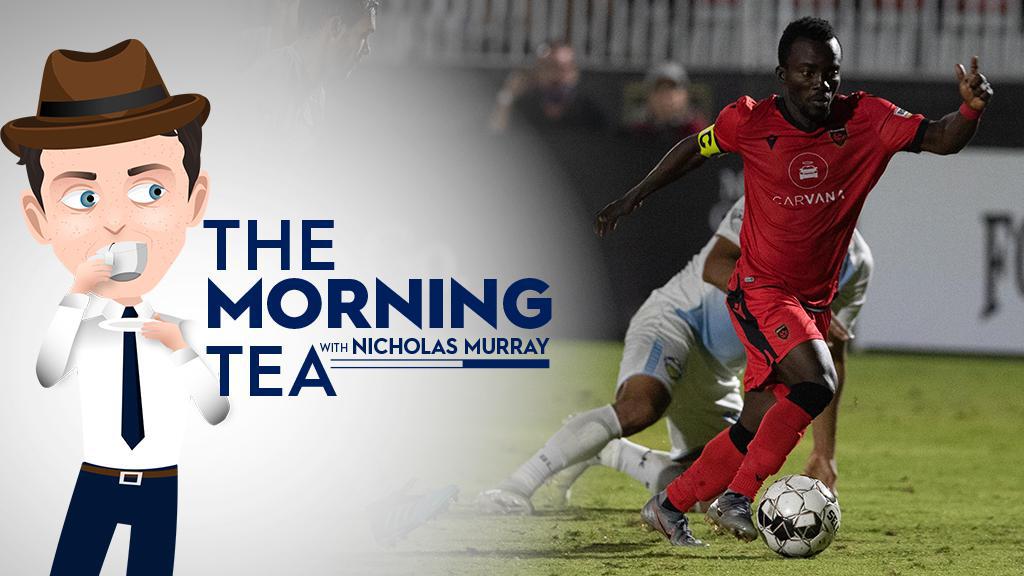 The pre-game press conferences with the coaches are over, the final walkthroughs are today, and we’re one day away from the 2020 USL Championship Final. Here’s your final Morning Tea of the season.

As usual, Solomon Asante is going to be the smallest player on the field this Sunday night.

Also as usual, the Phoenix Rising FC playmaker is the person most likely to have an outsized role in which side claims victory in the 2020 USL Championship Final as he leads his side against the Tampa Bay Rowdies at Al Lang Stadium.

Listed at 5-foot-2 and 132 pounds, the former Ghanaian international has been an attacking sensation since he first stepped foot on the field for Rising FC at the start of the 2018 Championship season. Since that first outing on the road against Orange County SC, there’s been no-one who can match his output in the final third of the field in the league.

He’s tallied 257 chances created when no-one else in the league has topped 200 and has fired off a Championship-high 296 shots and 131 shots on goal.

“He’s a player with such tremendous athletic ability, quickness, technical ability,” said Rising FC Head Coach Rick Schantz at Friday’s pre-Final press conference. “He does things that I only saw from Didier [Drogba] as a coach, but most importantly I think he’s a student of the game. He’s constantly talking to me about the opposition.”

It’s that dedication to building knowledge on how opponents work combined with the experience he’s gained both in club soccer and in more than 20 appearances for Ghana internationally that have allowed the 30-year-old to thrive in Phoenix. While opponents will put a premium on containing Asante in every game, there he can still be found, finding pockets of space that give him the chance to receive possession and challenge opposing defenses.

That dedication goes beyond the field, too, where Asante’s leadership and is reflected in his routine away from the training ground.

“He’s also a man of great faith and he puts everything into preparing every week. He’s always cooking for himself and other players, he’s not eating out, he takes good care of his body,” said Schantz. “Many people don’t know this, but because of the time difference in Ghana, Solo will go home from training in the morning and sleep so he can stay up and speak to his family and his three kids back home.”

“He’s just an all-around great young man and I’ve just been honored to be his coach,” said Schantz. “I hope that I’ve been able to help him and continue to improve and develop because he’s helped me not only with a lot of wins, but to be a better coach.”

On Thursday, Asante earned his second consecutive nomination for the Championship’s Most Valuable Player award to go with a second consecutive All-League First Team selection on Wednesday. But if there’s one thing that’s been missing before now it’s been for Asante to lead a postseason run.

In 2018, it was Drogba that led the way, scoring in all three games as Phoenix claimed the Western Conference Title before coming up short against Louisville City FC. Last year, Asante didn’t register a goal or assist in the playoffs as his season tailed off late, recording only two assists and no goals in his final five appearances.

This year, that’s not the case as Asante’s two goals have proven crucial so far in Phoenix’s reaching this moment. If he can find the net on Sunday at Al Lang Stadium, it could go a long way to bringing the Championship’s ultimate prize back to Phoenix.

Just getting used to the place.#RisingTogether | #AwayDays delivered by @Carvana pic.twitter.com/fadKowXbO7

- Mental preparation has come to the forefront this week for the Tampa Bay Rowdies ahead of Sunday’s Championship Final at Al Lang Stadium. The Unused Substitutes’ Jake Nutting has more from Head Coach Neill Collins on making sure the club is feeling good as it goes into its final game of 2020.

- Phoenix Rising FC began the 2020 season looking to learn from its early exit from the postseason the prior fall. As Cronkite News’ Edwin Perez writes, the road to the club’s second Championship Final has been long and taken a route that couldn’t have been envisioned when the side kicked off in March.

- 2020 Championship All-League selection Kevin Partida and Reno 1868 FC teammates Sam Gleadle and Foster Langsdorf were all officially announced as the newest signings for Minnesota United FC of Major League Soccer on Friday. Nevada Sports Net’s Chris Murray has more on the big move for the trip that helped Reno post the best regular-season record in the Championship this season.

- New Mexico United officially announced on Friday the launch of a fully-funded Academy program that will compete in the USL Academy League next year. Current Head of High Performance Youth Programming and First Team assistant Zach Prince will lead the program as it looks to provide a pathway to the pro ranks for the best talent from around the state.