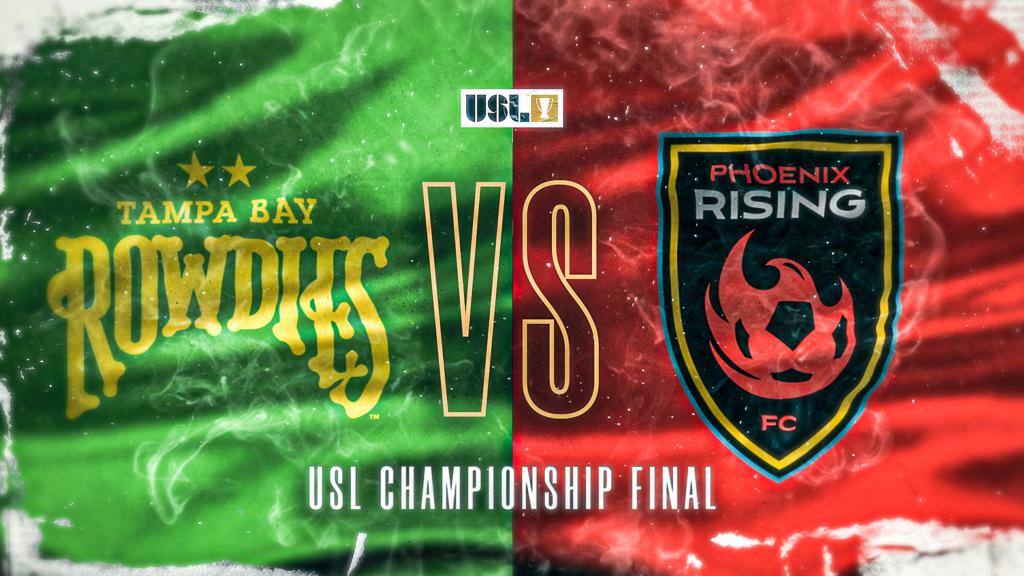 ST. PETERSBURG, Fla. – One of the Tampa Bay Rowdies or Phoenix Rising FC will become the eighth club to lift the trophy at the USL Championship Final on Sunday night as the two sides meet at Al Lang Stadium in the 2020 Championship Final. Kickoff is scheduled for 8:30 p.m. ET and the game will be aired live nationally on ESPN, ESPN Deportes and SiriusXM FC.

The @TampaBayRowdies earned their first trip to the Championship Final in its fourth season in the league as they ended the reign of Louisville City FC in the Eastern Conference last Saturday night. First-half goals by Zach Steinberger – his first of the 2020 season – and captain Sebastian Guenzatti sent the Rowdies to a 2-1 victory against LouCity and the Eastern Conference Title at Lynn Family Stadium. Guenzatti’s goal was his second of the postseason and moved him to 10 goals for the campaign across the regular season and playoffs. Tampa Bay’s foundation has been built on one of the best defenses in the league, however, where the side has conceded only 14 goals in 19 games. That record helped see defenders Forrest Lasso and Jordan Scarlett earn selection to the Championship’s All-League Team on Wednesday.

@PHXRisingFC also had a pair of players voted to the All-League Team with forwards Solomon Asante and Rufat Dadashov selected after helping lead the Championship’s most productive attack in the 2020 season. Phoenix is making its second trip to the Championship Final in the past three seasons after falling to Louisville in the 2018 title game. This postseason the side has gone to extra time in each round, including last Saturday night when it took a 4-2 victory in a penalty shootout against El Paso Locomotive FC after the teams had played to a 1-1 draw at Casino Arizona Field. Rising FC goalkeeper Zac Lubin had a five-save performance before making a key save in the shootout for a second consecutive game, as Phoenix had previously eliminated Reno 1868 FC in a shootout in the Western Conference Semifinals before defeating El Paso for the club’s second Western Conference Title.

8 – Both the Tampa Bay Rowdies and Phoenix Rising FC have recorded eight assists from set plays in 2020, tied for the most in the Championship across the regular season and playoffs.

2.47 – The Tampa Bay Rowdies have conceded the fewest shots on target in the Championship this season, allowing an average of 2.47 per game going into Sunday’s contest.

344 – Phoenix Rising FC has recorded the most total shots in the league this season with 344, an average of 19.1 per game, and set a Championship Playoffs record with 31 shots in its contest against Reno 1868 FC in the Conference Semifinals on October 17.