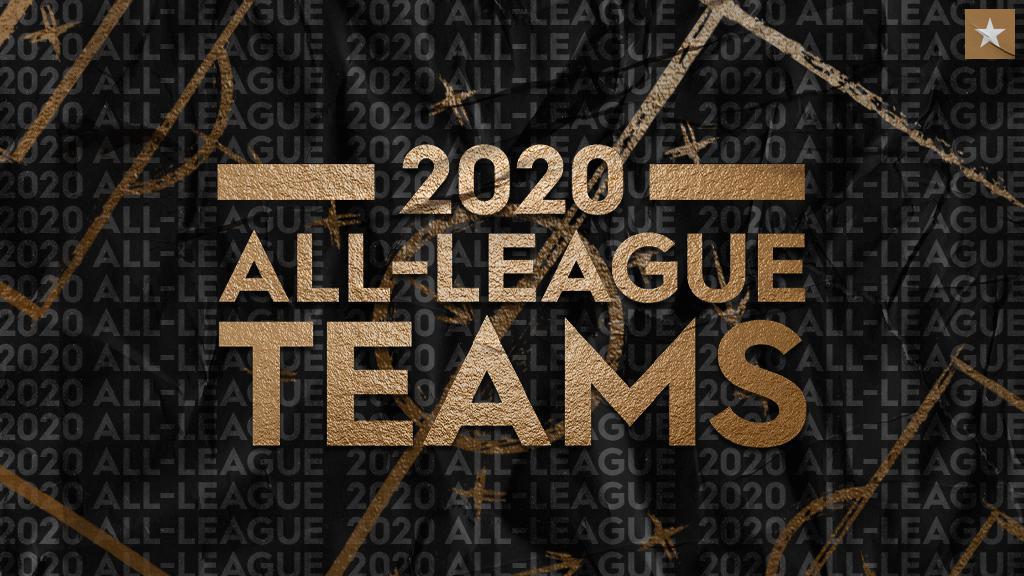 TAMPA, Fla. – The United Soccer League honored standout performers from the regular season on Wednesday with the announcement of the 2020 USL Championship All-League Teams. Louisville City FC led the way with four First Team selections, while 11 clubs overall had players selected among the 22 honorees.

Three players were again named to the All-League First Team, with the Tampa Bay Rowdies’ Forrest Lasso named to the team for the fourth consecutive and both Phoenix Rising FC’s Solomon Asante and Pittsburgh Riverhounds SC’s Kenardo Forbes earning their second consecutive selections.

Lasso’s defensive colleague Jordan Scarlett on the Rowdies was named to the All-League Second Team, as was Rufat Dadashov, Asante’s attacking running mate in Phoenix, as the two teams prepare for this Sunday’s 2020 USL Championship Final.

The 2020 USL Championship All-League Team was voted on by club management and a league-wide media panel that included representation from every USL market.

The finalists for the 2020 Championship Awards will be announced on Thursday, preceding the 2020 USL Championship Final, which will air live on ESPN, ESPN Deportes and SiriusXM FC in the United States on Sunday, November 1 at 8:30 p.m. ET as the Tampa Bay Rowdies of the Eastern Conference and Phoenix Rising FC of the Western Conference meet at Al Lang Stadium in St. Petersburg, Florida. 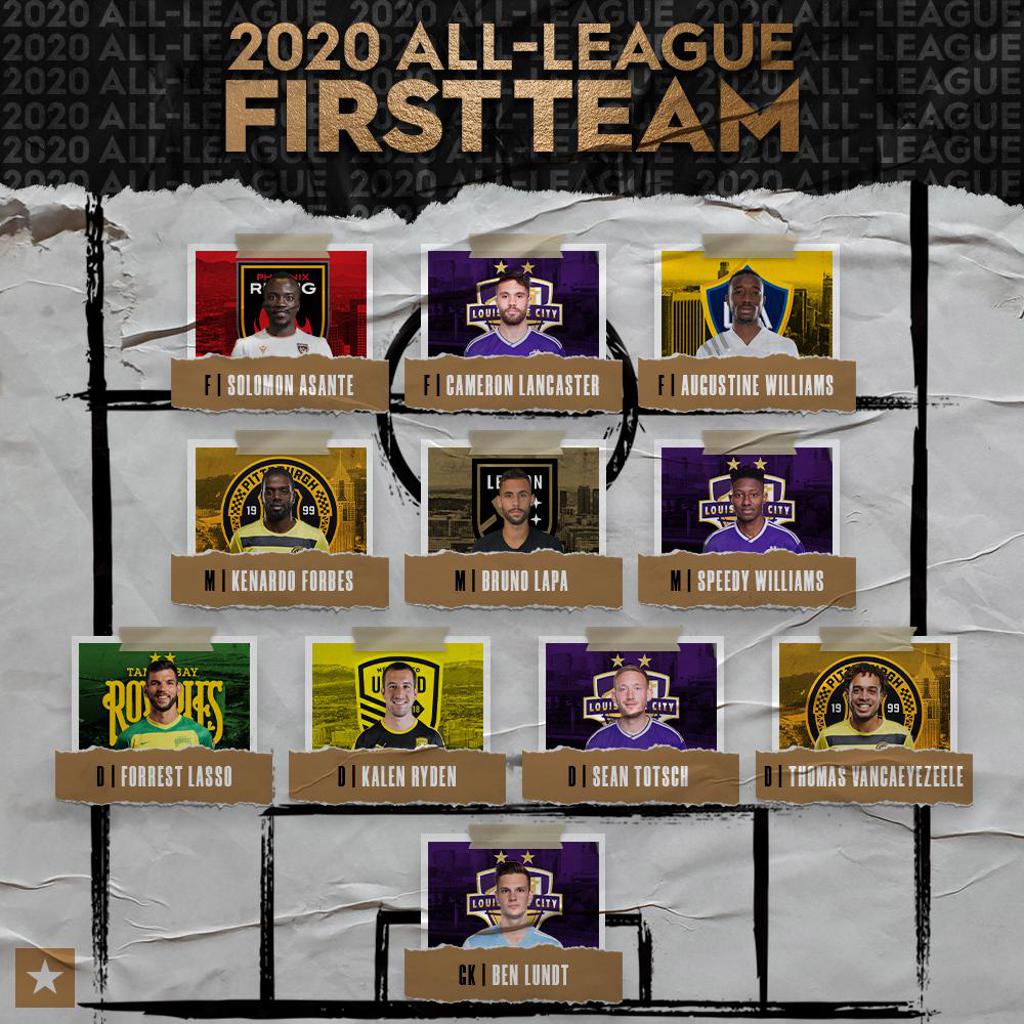 GK – Ben Lundt, Louisville City FC: Lundt recorded seven shutouts and posted a 0.87 goals-against average and a save percentage of 72.5 percent as he played every minute of the regular season to help Louisville notch the best record in the Eastern Conference.

D – Forrest Lasso, Tampa Bay Rowdies: Lasso maintained his high standard at his new club recorded 25 interceptions and a league-leading 86 clearances while winning 61.6 percent of duels and 66.3 percent of aerials in the middle of the Rowdies’ back line while also remaining a threat in attack where he scored three goals.

D – Kalen Ryden, New Mexico United: A new arrival in the offseason, Ryden helped substantially improve New Mexico’s defense as he recorded 63 clearances, 78 recoveries and 26 interceptions as United conceded only 17 goals in 15 games despite playing the full campaign on the road.

D – Sean Totsch, Louisville City FC: A three-time USL Championship Final-winner previously, Totsch had the best individual season of his career so far with 29 interceptions and 105 recoveries. In his 14 appearances during the regular season, LouCity posted a goals-against average of 0.65.

D – Thomas Vancaeyezeele, Pittsburgh Riverhounds SC: An All-League Second Team selection in 2019, Vancaeyezeele impressed even further this year as he became the leader in the Hounds’ back line. The French Guiana international played every minute of the regular season and recorded 30 interceptions and 34 clearances as the Hounds recorded eight shutouts to tie for the league-lead.

M – Kenardo Forbes, Pittsburgh Riverhounds SC: Forbes continued to shine as one of the leading playmakers in the Championship with eight assists in 12 appearances. Forbes recorded a passing accuracy rate of 81.8 percent while averaging 64.3 passes per 90 minutes as he set the tempo for Pittsburgh in midfield while also recording 106 recoveries.

M – Bruno Lapa, Birmingham Legion FC: The Brazilian had a standout first professional season for Legion FC as he recorded seven goals and five assists to help the side reach the Championship Playoffs for a second consecutive year. Lapa ranked sixth in the Championship with 34 chances created and had a 79.5 percent passing accuracy rate.

M – Speedy Williams, Louisville City FC: Williams was dynamic in LouCity’s lineup as he played all-but 18 minutes of the regular season and completed the most passes of any player (831) in the Championship. The Jamaican international also finished second among outfield players in recoveries (141) and posted a passing accuracy rate of 86.4 percent.

F – Solomon Asante, Phoenix Rising FC: The Ghanaian standout became the first player in Championship history to claim the Assists Champion award with nine helpers while notching six goals for Rising FC. Asante also posted the most chances created (42) and tied for the most Big Chances Created (9) in the regular season.

F – Cameron Lancaster, Louisville City FC: Back in Louisville’s colors on loan from Major League Soccer’s Nashville SC, Lancaster recorded 10 goals and two assists as he continued to show a remarkable creativity around goal in the campaign to average 0.77 goals per 90 minutes. The English forward also provided excellent link-up play in attack and completed 70.8 percent of his passes in the regular season.

F – Augustine Williams, LA Galaxy II: Williams had a breakout campaign to help lead Los Dos into the USL Championship Playoffs for a second consecutive year as he recorded 13 goals and two assists to finish second in the race for the Championship’s Golden Boot. Williams played a key role down the stretch for the Galaxy II, scoring seven goals in the side’s final seven games of the regular season. 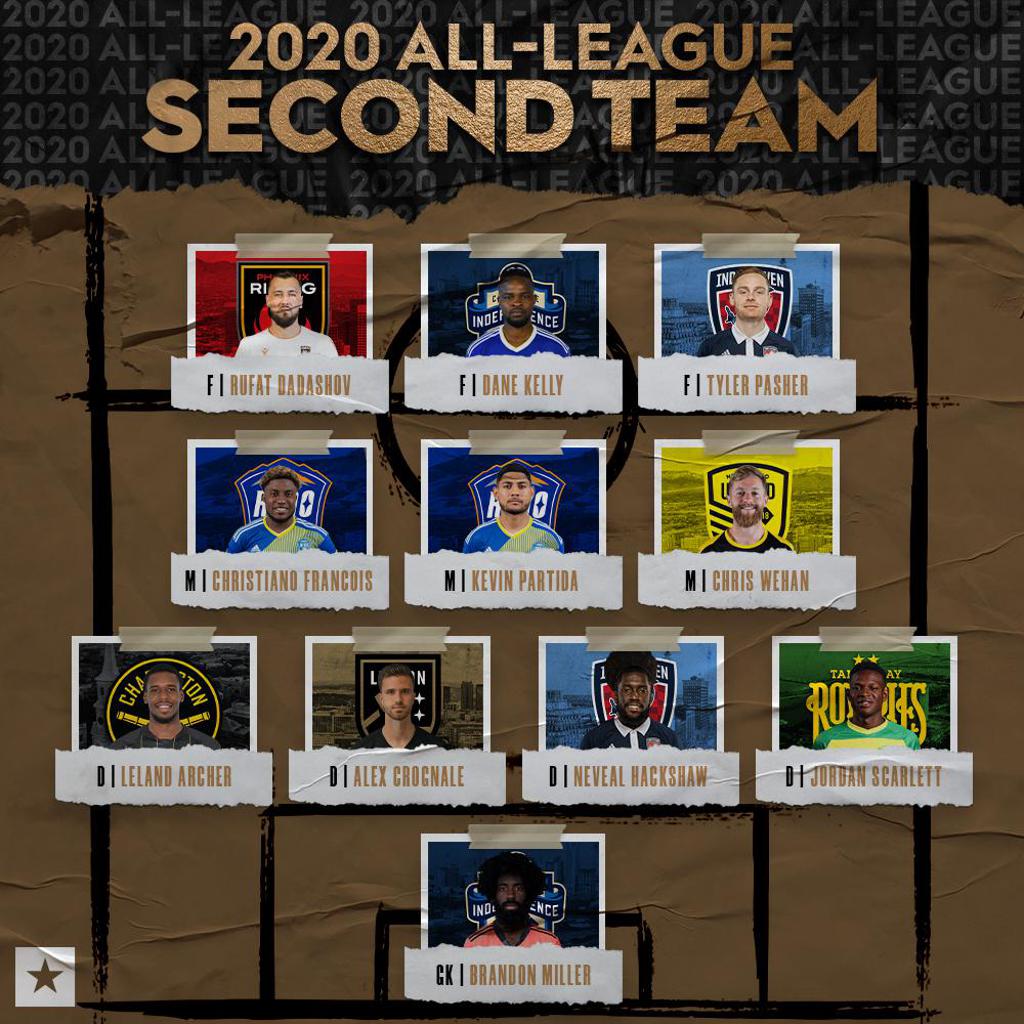 GK – Brandon Miller, Charlotte Independence: Miller earned the second All-League selection of his career after a stellar campaign that helped the Independence return to the USL Championship Playoffs for the first time since 2017. Miller led the league with 61 saves and recorded five shutouts with a save percentage of 73.5 percent.

D – Leland Archer, Charleston Battery: Archer’s third season with the Battery saw the Trinidad & Tobago center back produce a breakout campaign as he recorded 50 clearances and 95 recoveries while posting a passing accuracy rate of 80.1 percent in the middle of a strong Battery back line that helped the side earn its 13th consecutive postseason berth overall.

D – Alex Crognale, Birmingham Legion FC: One of Birmingham’s key offseason arrivals, Crognale was stellar in the center of the club’s defense as he finished tied for fourth in the league with 73 clearances and also made 73 recoveries while completing the fifth-most passes in the league (757) at an accuracy rate of 85.8 percent.

D – Neveal Hackshaw, Indy Eleven: The Trinidad & Tobago international earned his second consecutive selection to the All-League Team after another strong year for Indy. Hackshaw ranked third in the league in passes completed with 791, led all outfield players with 151 recoveries and made 24 interceptions for the Boys in Blue.

D – Jordan Scarlett, Tampa Bay Rowdies: One part of the Rowdies’ defensive makeover during the offseason, Scarlett was ever-present for Tampa Bay as he made 63 clearances and 34 interceptions defensively while notching a goal and assist in attack. Scarlett also recorded four Big Chances Created as his timing in the penalty area added another weapon for the Rowdies on set pieces.

M – Christiano Francois, Reno 1868 FC: The Haiti international continued to be one of the most electrifying wingers in the league as he recorded six goals and seven assists to help Reno record the best record in the regular season. Francois notched 33 chances created and completed 31 dribbles, consistently putting opposing defenses on the back foot.

M – Kevin Partida, Reno 1868 FC: In his third season with Reno – including a stint on loan from the San Jose Earthquakes in 2019 – Partida served as the pivot in the center of midfield that helped Reno succeed. The Nevada native sported a passing accuracy rate of 82.1 percent on 51.4 passes per 90 minutes and won 61.9 percent of his duels to help 1868 FC to the best record in the Championship.

M – Chris Wehan, New Mexico United: Earning his second All-League selection of his career, Wehan was one of the key figures in New Mexico’s return to the Championship Playoffs for a second consecutive season. The attacking midfielder recorded six goals and four assists while recording 21 chances created, but came up with three game-winning goals for his side as it reached the postseason despite playing its full schedule on the road.

F – Rufat Dadashov, Phoenix Rising FC: The Azerbaijani international made a big impact in his first game for Rising FC with a hat trick and continued to find the net consistently to lead the squad to the top of Group B. Dadashov recorded 11 goals and four assists in the regular season, but was also notable in his link-up play that saw him register 21 key passes and a passing accuracy rate of 72.4 percent overall.

F – Dane Kelly, Charlotte Independence: The Championship’s all-time leading scorer produced a return to form in his first season with the Independence, scoring 11 goals to lead Charlotte back to the postseason for the first time in three seasons. Kelly also notched a pair of assists as he earned the fourth All-League selection of his career.

F – Tyler Pasher, Indy Eleven: In his second season as an out-and-out striker, the Canadian standout got out to one of the fastest starts in the Championship’s history with six goals in Indy’s first six games and finished the regular season with 10 goals and two assists while notching a passing accuracy rate of 83.5 percent to earn his first All-League selection.