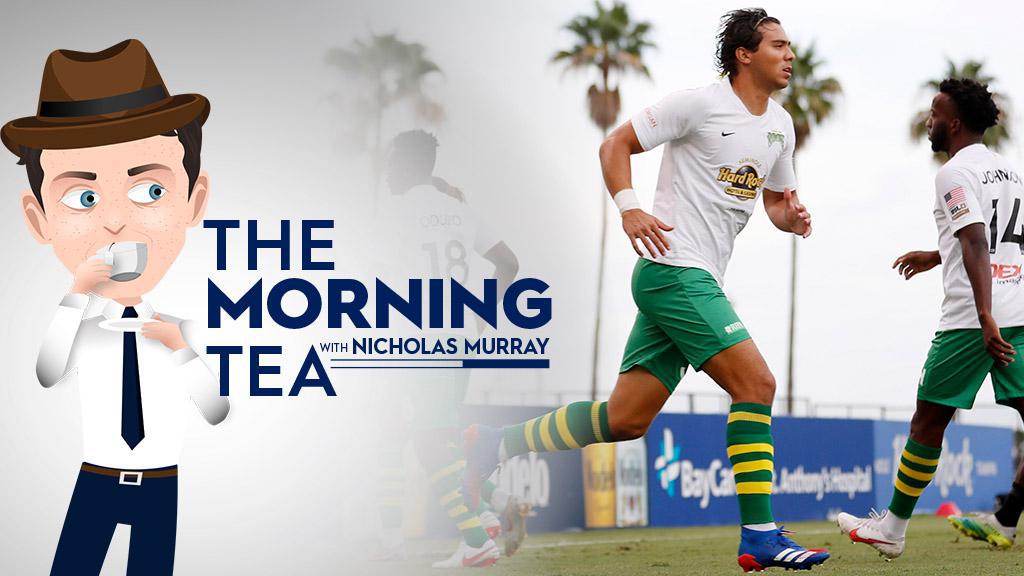 The countdown to Sunday night is underway for the Tampa Bay Rowdies and Phoenix Rising FC, where keeping a sense of normalcy is going to be the goal in preparations leading up to the Championship Final at Al Lang Stadium. Here’s your Morning Tea for Wednesday.

ST. PETERSBURG, Fla. – If there’s one advantage to reaching the final week of the season, simply the anticipation of what lies ahead in Sunday’s USL Championship Final can be a boost to preparations for both sides that have reached this point.

After the work the Tampa Bay Rowdies put in to earn victory last Saturday night against Louisville City FC, setting up a showdown with Phoenix Rising FC at Al Lang Stadium (8:30 p.m. ET | ESPN), Head Coach Neill Collins is anticipating a good atmosphere when the team reconvenes to begin its final preparations on Wednesday.

“I’m sure the adrenaline will still be pumping for these guys and they’ll be keen to enjoy this last week’s training,” said Collins to media on Tuesday morning. “Now that we know this is going to be our last week of training and they’re going to be off for a long time, I think there will be a lot of excitement around the training, let alone the game itself.”

The key now for Collins and his staff is to find the right balance that will allow the players to refill their fuel tanks one final time while also trying to keep things as similar as possible to prior weeks of preparation. In recent weeks that’s meant dialing back the work at times for some players – including defenders such as Aaron Guillen and Forrest Lasso or captain Sebastian Guenzatti, all of whom have now crossed the 1,500-minute mark this season – to make sure they are fresh for their final start of the season.

“Come the end of the year it’s really about nursing guys through and keeping them ready to play,” said Collins. “We know that they’re not going to have to train quite as much at this point of the season, so we’ve got a great staff that take care of them and we modify as much as we can for these individuals so that come the game they’re ready to give a maximum performance.”

At the same time, maintaining intensity when the team is on the training field is important. While Collins doesn’t expect to see too many challenges flying around in practice – “You don’t want the boys kicking lumps out of each other,” he said, “every time there’s a tackle in training you’re wincing because you don’t want anybody to get hurt.” – the attention to detail over the coming days is going to be important, especially ensuring each player is mentally prepared for what’s at stake against Phoenix.

“It is still important to train right, that’s something I’ve learned,” said Collins. “You’ve still got to have an intensity in your training because otherwise the body does start to shut down if it doesn’t have those training sessions during the week.

“For me, in my experience as a player, generally it wasn’t so much about physical demands, it was more about the psychological demands. We’re all human at the end of the day and we put a lot of anxiety and nervous energy into the buildup to these games, so you want to get them feeling good psychologically as well.”

Saturdays loss was a tough pill to swallow and not the way I imagined going out. That being said, the last four years in Louisville have been the best years of my life. I want to say thank you to the best fans in the USL. Thank you to the owners and the front office!

Just heard that @sarahlgorden of @chiredstarsPR is joining the broadcast team for the #USL Championship Final on Sunday night as a sideline reporter, right after wrapping up her first full #USWNT senior team camp.@USLChampionship final is on ESPN, 11/1 at 8:30 ET.

- Birmingham Legion FC’s second campaign in the Championship took a different course due to the Coronavirus, but the club’s leadership and owners are optimistic about the club’s future. The Birmingham Business Journal’s Tyler Patchen has more.

- Charleston Battery forward Nicque Daley was disappointed his side’s run in the 2020 Championship Playoffs didn’t go further as it was the closest he’d come to winning a title in his young professional career. Speaking with the Jamaica Observer, Daley said, “I think if we can keep this team together maybe next season we can keep things going [and win a trophy].”

- If there’s anything to be taken away from 2020 on the field, it’s a year where youth more than ever has received its chance both in Major League Soccer and in the USL Championship and League One. Among those getting the chance to take the stage for the first time this year was 15-year-old Darren Yapi, who signed a USL Academy contract with Colorado Springs Switchbacks FC part of a young pipeline of talent that’s now emerging from the Colorado Rapids’ Academy.