THE MORNING TEA – On the Spot, Phoenix’s Lubin has Risen to Moment

Asante makes Drogba call after Western title; Louisville looks back as season comes to an end 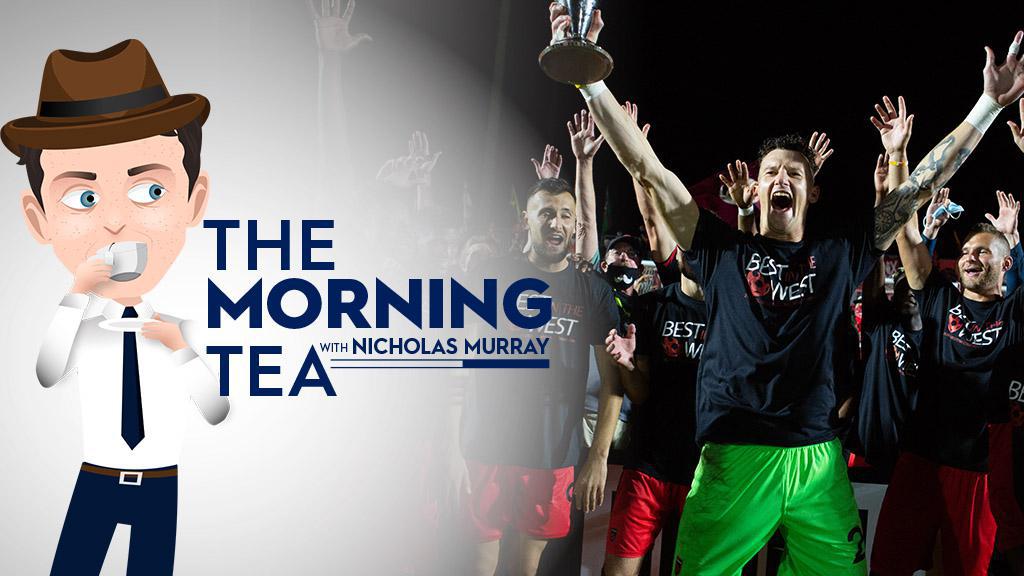 It’s USL Championship Final Week, and we’re guaranteed of seeing a first-time winner on Sunday night as the Tampa Bay Rowdies host Phoenix Rising FC at Al Lang Stadium. Rising FC’s chance to claim its first title has been fueled by the man nicknamed The Mountain, who’s record in penalty shootouts the past two years is now unmatched. Here’s your Morning Tea for Tuesday.

PHOENIX – It’s odd, when you think about it.

Since joining Phoenix Rising FC before the 2018 USL Championship season, goalkeeper Zac Lubin has faced 10 penalty kicks during regulation or extra time. He’s not saved one.

Put him into a penalty shootout, though, and it’s been another story.

Rising FC claimed its third consecutive victory from the spot on Saturday night with Lubin between the sticks to earn its second trip to the USL Championship Final as Lubin’s denial of El Paso Locomotive FC’s Nick Ross in the second round proved key in his side’s 4-2 victory in a shootout after the sides had played to a 1-1 draw after extra time at Casino Arizona Field.

“Hey, that’s what I’m here for,” Lubin said after the game. “That’s the one time a goalkeeper can step up and win a game for your team, so anytime we have to go to penalties I tell our guys ‘be calm, be cool, put your shot away and I’ll make a save for you.’”

Lubin’s key save on Ross last Saturday night followed those against Austin Bold FC in the Western Conference Quarterfinals of the 2019 Championship Playoffs, where he denied both Thomas de Villardi in the second round and Jermaine Taylor in the ninth round to help his side to victory, and in this year’s Western Conference Semifinals against Reno 1868 FC, where he denied Aidan Apodaca in the fifth round to give teammate Rufat Dadashov a chance to clinch the game he duly took.

“When good people get put in difficult situations, it’s good that they get rewarded like that,” said Phoenix Head Coach Rick Schantz. “He’s not only a fantastic goalkeeper but a first-class human being. I’m really happy for him. I told him thank you and he’s shown me a lot and I’m very proud of him.”

Now 31 years old, Lubin was a late starter when it came to the professional ranks. After competing collegiately at Division II school St. Martin’s College in Washington, the Montana native played for two seasons with the Kitsap Pumas in USL League Two, and another for Sounders FC U-23. Then there was a first foray overseas to Sweden, and then finally into the Championship with FC Tulsa as the club launched in the 2015 season, and a season with the Swope Park Rangers in 2016 before another year in Sweden the following year.

Then Lubin landed in Phoenix, where he appears to have finally found a home. He’s now made 56 appearances in the regular season and playoffs for the club, and while there have been some missteps along the way – see last week’s early error against Reno – he’s recorded a 72.7 save percentage and a 0.98 goals-against average in Rising FC’s colors.

After watching from the bench two seasons ago when Carl Woszczynski got the start against Louisville City FC in the Championship Final, this Sunday night will be Lubin’s chance to add to what has already been a memorable postseason.

A massive congratulations to @TampaBayRowdies and @PHXRisingFC for advancing to the Championship Final.

Felt good to be back in the conference finals.#ADayLater

And just like that, we are SOLD OUT pic.twitter.com/LnYByHrxTN

- What’s the first thing you’d do after reaching the USL Championship Final? For Phoenix Rising FC’s Solomon Asante it was call his former teammate and current Rising FC minority owner Didier Drogba to get him in on the celebrations.

- Despite falling short of a fourth consecutive trip to the USL Championship Final, Louisville City FC had another outstanding season in 2020. The Louisville Courier-Journal’s Dominique Yates reflects on the accomplishments of the team that has remained the model for others to follow in the Championship this year.

- After re-establishing his career with San Antonio FC during the 2020 Championship season, Argentine forward Luis Solignac has joined Chilean club San Luis de Quillota as it battles for promotion to the top flight. Solignac recorded eight goals and three assists as San Antonio earned top spot in Group D during the regular season.

Hartford Athletic’s Alfonso Vazquez was one of the intriguing young players to join the professional ranks this season. The New England Soccer Journal’s Jason York spoke with the former Windham High standout about his year, and with former Athletic Head Coach Radhi Jaidi about the next steps in the 18-year-old’s career.