In first Eastern Conference Final, Tampa Bay looking to ‘set the cat among the pigeons’ 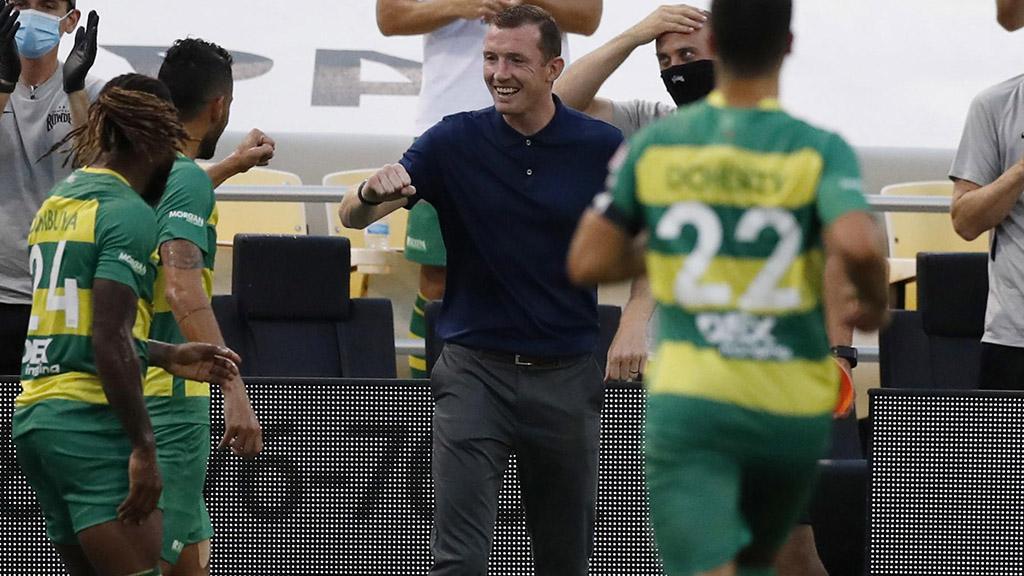 In his second full season at the helm of the Tampa Bay Rowdies, Head Coach Neill Collins has continued to build an identity that has made it one of the best teams in the Championship. | Photo courtesy Matt May / Tampa Bay Rowdies

He’s seen the projections from fivethirtyeight.com that have his side as a 38 percent chance to beat Louisville City FC on Saturday night in the Eastern Conference Final of the 2020 Championship Playoffs.

He’s also heard the praise that’s being – rightfully – given to his opponents, who have reached the Eastern Conference Final in each of its six seasons and have won the last three.

“We weren’t going to bother going down there because obviously they’re playing Phoenix next week in the USL Championship Final,” Collins joked this week in his weekly media session. “It seems as if everyone’s got that one penciled in at Lynn Stadium.”

Well, not quite everyone when it comes to Phoenix – at least – but you get where he’s going. Louisville’s playoff reputation is formidable, as is the eight-game winning streak the club is currently on and the 13-game undefeated run that began before it to carry LouCity to the best record in the Eastern Conference for the second time in its history.

“But then we thought, ‘you know what, we quite like our team,” Collins went on. “’We quite like what we’re about and how we play, so why don’t we go down there and give it our best shot and do what we’ve done all season?’” 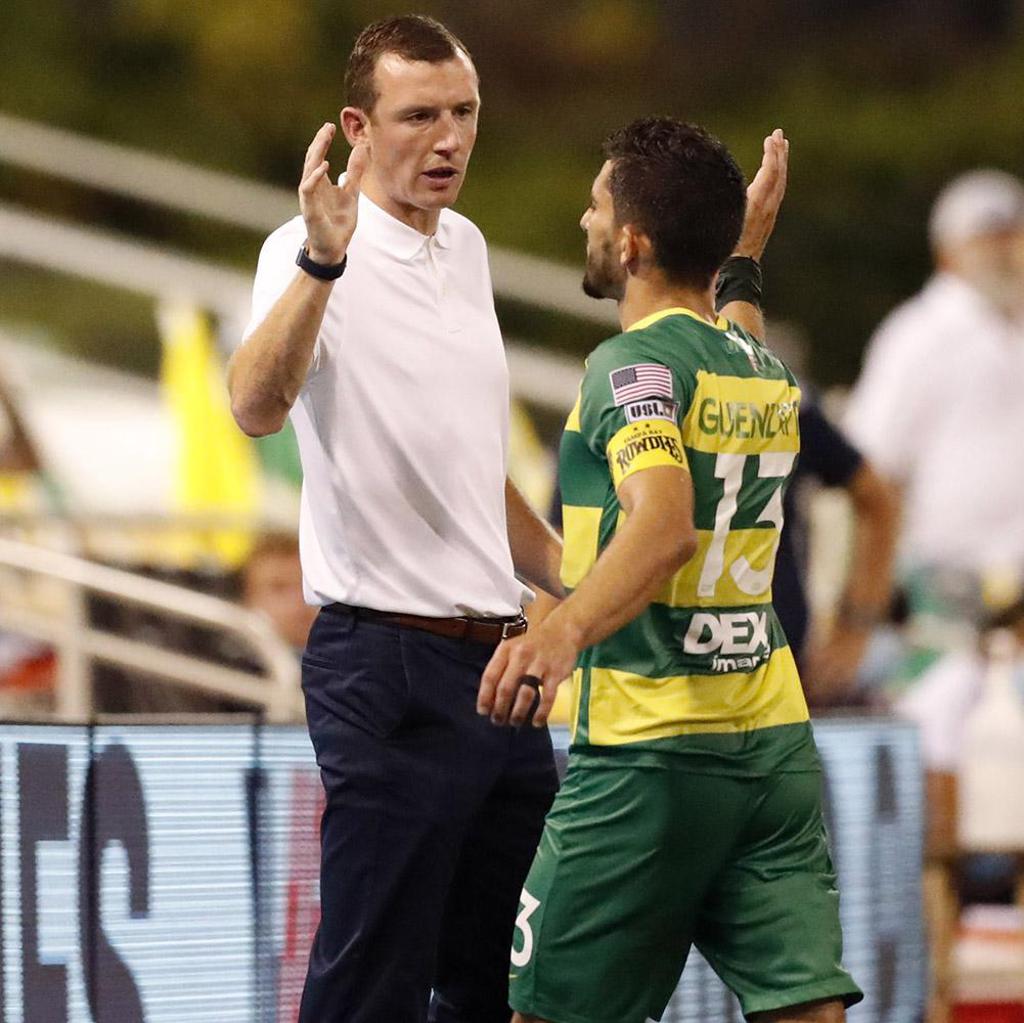 If there’s a chip on Collins’ shoulder, it’s a good-humored one as he takes digs at those be believes doubt his side’s ability to come through in the biggest moment it’s faced since joining the Championship in 2017. You’ll find plenty of respect over in the other dugout as well for what the Rowdies have done this season after conceding the second-fewest goals in the league during the regular season and finding timely finishing in winning 12 of its 18 games to reach this point.

“Neill Collins does a really good job, he does an excellent job with his team,” said LouCity Head Coach John Hackworth this week. “I think the game sets up to be a classic Eastern Conference Final. They have added a few pieces that I think Neill was looking for in his team, so I think he should feel confident. They’re in good form, we’re in good form, I think you’re finding the two best teams in the East to reach the Final and play for an opportunity to go to the USL [Championship] Final.”

Plus, there are bonuses to being the underdog. Who doesn’t want to be able to set up his team with the “no-one believes in us” narrative in the buildup to a game?

But there are hurdles the Rowdies are going to have to overcome if they’re to reach their first title game since 2012. For one, the club has defeated LouCity only once in seven prior meetings and has never taken victory in Louisville. A memorable 2-2 draw last year late in the regular season that saw the side rally despite being down to 10 men is the best result it has produced on the road so far, but that was followed by a 2-1 loss a few weeks later in the postseason.

The side can point to landmarks it has achieved this season for confidence, though, as Collins’ vision for the team’s style and makeup continued to build in his second season at the helm.

“We’ve been to the Red Bulls II and played against guys that are playing regularly now in MLS, beat them,” said Collins. “Been on the road and won in Miami for the first time, twice.” 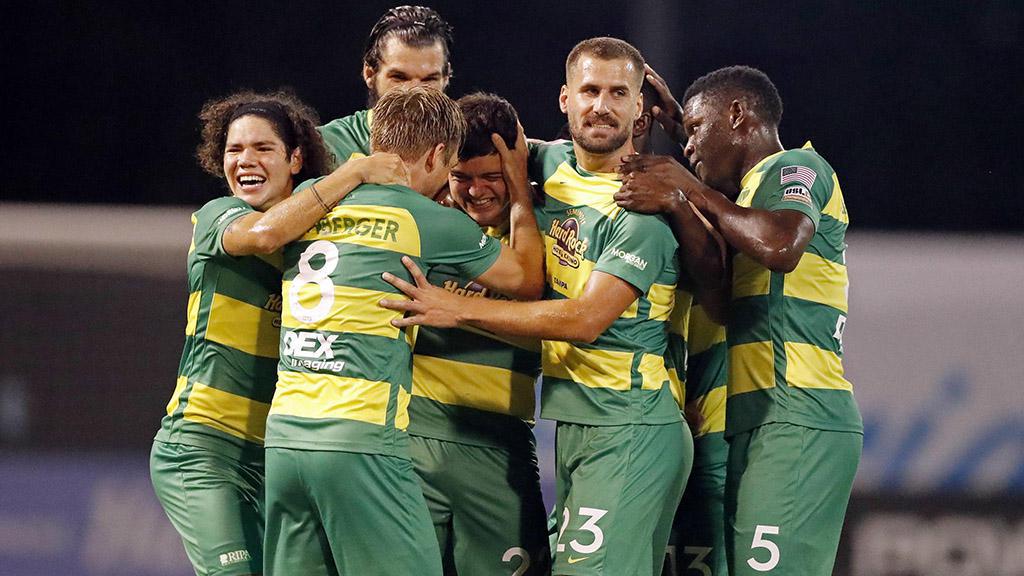 You can add finding a way past the Charleston Battery – who had taken three consecutive victories against Tampa Bay to close out the regular season in Group H – last weekend to that list as well. The Rowdies put in a defensive clinic as they held Charleston’s attack to only two shots on goal and only 16 touches inside the Tampa Bay penalty area in their 1-0 win to earn their place in Saturday’s showdown.

A similar defensive effort might be required against LouCity’s attack on Saturday night as the Rowdies look to end a 14-game undefeated streak its hosts possess against Eastern Conference opposition in the Championship Playoffs.

If that’s what it takes, though, Collins believes the Rowdies have got it in them.

“I like our guys a lot, I’d back them against anyone,” said Collins. “I think we’ve got a great team spirit, a great togetherness, a great way of playing, and yeah, it’s a challenge, of course. Going on the road against any team in this league is a challenge, whether it’s in the Eastern Conference Final or not.

“The most important people who believe in what we’re going to do are the guys who are going to go on the field and the guys that are supporting them. That’s all we need. We’re hopefully going to go down there and put the cat amongst the pigeons.”