A Season On, Deal Between Rowdies, LouCity Has Proven Mutually Beneficial

Mkosana, Hoppenot have become key players for new clubs since trade midway through 2019 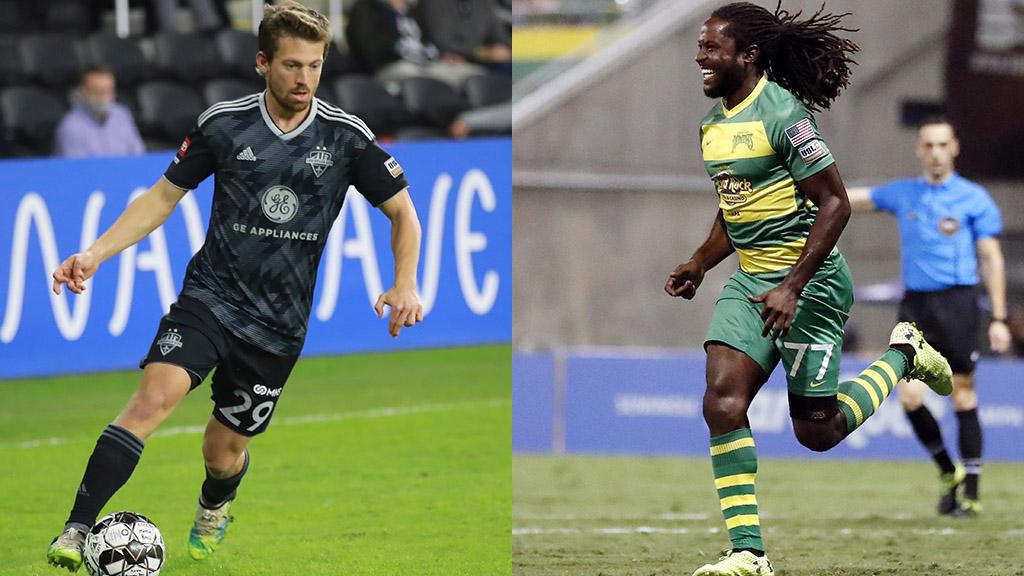 Since the trade that sent Antoine Hoppenot (left) to Louisville City FC and Lucky Mkosana to the Tampa Bay Rowdies midway through 2019, both players have thrived in their new surroundings.

ST. PETERSBURG, Fla. – While less common, player trades between clubs in the same league can often be viewed in the same way as a game, where one side is seen to have ‘won’ by getting the better end of the agreement.

If there’s been a deal in the Championship that’s proven of benefit to both sides in the past two seasons, though, it’s the deal that sent Lucky Mkosana to the Tampa Bay Rowdies and Antoine Hoppenot to Louisville City late in June 2019, with both players having had a key role to play in the success of their new clubs since.

For Rowdies Head Coach Neill Collins, the mutual success that has come for both players and clubs – who will meet on Saturday night in the Eastern Conference Final of the 2020 USL Championship Playoffs at Lynn Family Stadium – derived from the clear-headed approach each side had to the pieces they had, and the pieces they needed moving forward.

“I think honestly that’s a great example of two coaches picking up the phone to each other and just being straightforward,” said Collins this week. “I think that’s the great thing about football. ‘Hops’ is a good player, we signed him for a reason, it didn’t quite work, but we’ve been learning a lot about the system we want to implement, who fits and who doesn’t, and [LouCity Head Coach] John [Hackworth] maybe felt the same with Lucky. Of course, we’re biased toward Lucky, but I think if you’re honest both clubs are happy with how that worked out.”

Mkosana wasn’t faring poorly at Louisville with four goals in his 15 appearances prior to the trade. Since then, though, he’s proven a key element in the Rowdies’ attacking rotation, especially when employed in his current role off the bench. The Zimbabwean’s 10 goals overall for Tampa Bay have come at an average of 108.1 minutes per goal, and he’s provided the game-deciding goal in each of the Rowdies’ past two postseason outings this fall.

Hoppenot, on the other hand, never quite seemed to find his niche in Tampa Bay, where he recorded fewer than 400 minutes and no goals or assists for the Rowdies. Since his move, he’s recorded almost 2,750 minutes in 37 appearances for LouCity, has notched six goals and this season leads the team in assists with seven. On top of that, he provided maybe the most memorable moment of the club’s postseason run a season ago with his stoppage-time equalizer against Indy Eleven in the Eastern Conference Final, which sent the contest to extra time where LouCity would come out on top.

Both players seem set to have a key role to play this weekend, too, with Hoppenot now one of the first names on the team sheet for Hackworth and Mkosana set to reprise his role off the bench for Collins. Sixteen months on from the deal being made, both sides can feel mutually happy.

“It was a good deal for the players, a good deal for the clubs, and that’s a great team,” said Collins. “Some players work in certain systems and don’t in others, and it’s good that we were able to realize that and make it better for us and Louisville, they’ve benefited. I don’t think we concern ourselves with have we made Louisville stronger, I think the most important thing is we made ourselves stronger and we’re happy with that.”