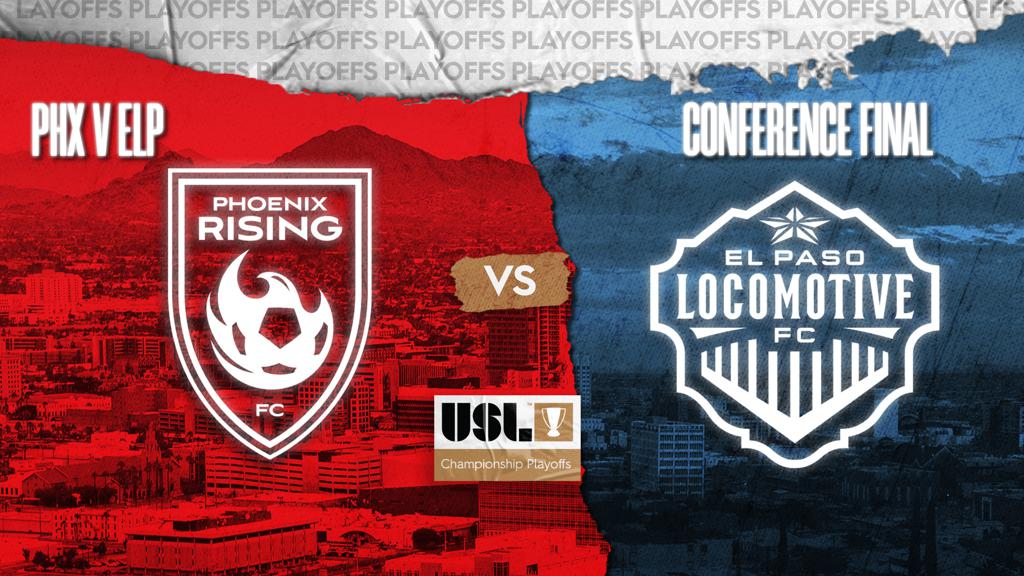 PHOENIX – Phoenix Rising FC will try to reach the USL Championship Final for the second time in three seasons as it plays host to El Paso Locomotive FC, which is making its second consecutive trip to the Western Conference Final, at Casino Arizona Field on Saturday night in the 2020 USL Championship Playoffs. Kickoff is scheduled for 10:30 p.m. ET.

@PHXRisingFC advanced to its second Western Conference Final after first rallying from a two-goal deficit and then coming through a penalty shootout against Reno 1868 FC last Saturday night at Greater Nevada Field. Solomon Asante’s second goal of the playoffs provided the equalizer for Rising FC in the 71st minute before Zac Lubin made a key save to open the fifth round of the shootout, allowing Rufat Dadashov to send Phoenix through. Phoenix has won eight out of nine games at Casino Arizona Field this season and will be hoping to maintain that form as it continues its pursuit of its first league title.

A penalty shootout was also required for @EPLocomotiveFC to advance in the Conference Semifinals as it edged out regional rival New Mexico United from the spot at Southwest University Park. Goalkeeper Logan Ketterer came up with the decisive save to close the fourth round, allowing Distel Zola to finish the match with the opening shot of the fifth round as Locomotive FC won its second consecutive shootout of the postseason. El Paso previously visited Phoenix in the regular season and suffered a 3-1 defeat after taking an early lead. The overall performance from that night might provide some confidence for El Paso, which is currently on a 13-game undefeated streak since then, as Locomotive FC outshot Phoenix 23-8 over the contest, including a 17-1 shot advantage in the second half as El Paso tried to get rally from its two-goal halftime deficit.

79 – Phoenix Rising FC has won 79 percent of its home games at Casino Arizona Field since the start of the 2019 season, going 22-3-4 over that span, for the best home winning percentage in the Championship.

45 – During El Paso Locomotive FC’s current 13-game undefeated streak since its defeat to Phoenix on August 1 it has only trailed its opponents for 45 minutes.