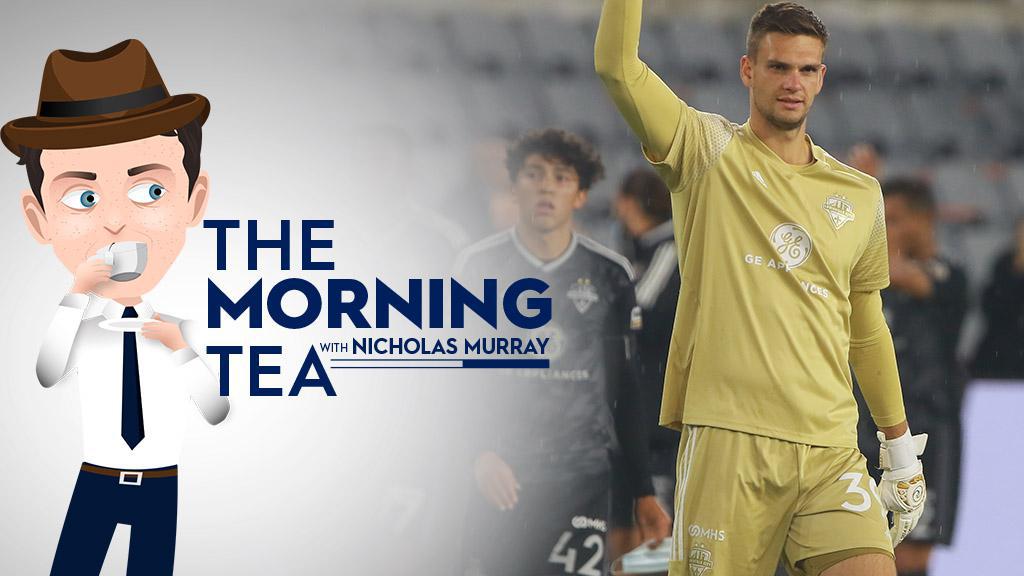 As often happens, goalkeeping performances took center stage over the past weekend in the USL Championship Playoffs. And the biggest gem of all came in a record-tying display at Lynn Family Stadium. Here’s your Morning Tea for Tuesday.

Here’s a trivia question for you. Before Saturday night, what was Ben Lundt’s highest single-game save total for Louisville City FC?

The answer’s four, which had happened four times in his 28 appearances.

Which is to say it’s no exaggeration that Lundt’s 10-save shutout in LouCity’s Eastern Conference Semifinal against Saint Louis FC on Saturday night was a career moment for the 25-year-old native of Berlin, Germany as he helped his side maintain its streak of reaching the Eastern Conference Final of the USL Championship Playoffs in every season of its history.

“He’s been amazing,” said LouCity teammate Antoine Hoppenot after the game. “His second year he has grown a lot as a player and a lot as a person. I think he is opening up a lot in the locker room as well, so I think that’s helping. He’s feeling more comfortable with us as a team on and off of the field. It is really showing on the field.”

Lundt’s biggest save? Well, that had to be the 11th-minute penalty stop to keep Wal Fall – who entered the game having scored 15 of 17 penalty kicks in his Championship career – from giving STLFC an early lead. His low save on Fall’s shot to the bottom-right corner wasn’t the only key stop, though with a 1-on-1 save early in the second half on Todd Wharton when Louisville’s held a one-goal lead, and the double-save late that got an assist on the goal line from Oscar Jimenez to keep Saint Louis from grabbing a potential lifeline as the contest approached stoppage time also likely to end up on Lundt’s highlight reel.

But for Lundt – who tied a Championship Playoffs record held by former Championship Final-winner Andrew Dykstra with his 10-save performance – the pregame preparation to anticipate Fall’s penalty kick set him up for what proved maybe the key moment in the contest.

“Scott Budnick, my goalkeeper coach, has been doing a really good job of scouting other teams and I watched a couple of penalties from a couple guys before the game. There might be a possibility of a penalty shootout so I kind of have to,” said Lundt. “I see Fall coming up and I had a pretty good idea of what he wants to do and luckily it worked out. I think I watched five or six penalties of him. We discussed it in our little goalkeeper union. The specific player had a penalty against us – Chris Hubbard [faced it] – last year against Ottawa and he went the same side.”

As we saw this weekend across the Championship’s four Conference Semifinals, having a top goalkeeper is an essential element for a team with title aspirations. Both Phoenix Rising FC’s Zac Lubin and El Paso Locomotive FC’s Logan Ketterer made key stops for their sides in penalty shootouts, while Lubin – despite an early error – helped keep Phoenix in the game after it fell behind against Reno 1868 FC with some outstanding shot-stopping of his own.

Despite seeing relatively few shots previously in his time on loan with LouCity over the past two seasons – Saturday’s save total accounted for 14.3 percent of the 70 saves Lundt has made for the club overall – the German appears ready for whatever the next two potential games may throw at him.

“Today I was in the game early on and sometimes that’s good for a goalkeeper – staying engaged. Today I couldn’t really take my mind off of the game, and it worked well for me but that is the challenge in every game. So, I have to do my job and it doesn’t matter if it is in the 10th minute today, the 90th or if it is in the 120th.”

When something bad happens in the game and people tag the team account. #smsports pic.twitter.com/8ebZZpGi3f

Incredible effort. Can't wait to see who will lift the trophy pic.twitter.com/oNRWurgobJ

- El Paso Locomotive FC’s Logan Ketterer believes his side will be looking for redemption after last year’s loss in the Western Conference Final as it heads to face Phoenix Rising FC on Saturday night. “We’re really excited to be back. We have a huge chip on our shoulder from losing there last year and we’re excited to get a chance at redemption there,” Ketterer told KTSM’s Colin Deaver. “Phoenix will be no joke, but we can’t wait to get it on.”

- A Tampa native and former Head Coach at the University of South Florida, Louisville City FC’s John Hackworth got into soccer because of the Tampa Bay Rowdies when he was a youngster. But, as he faces the modern version of the Rowdies on Saturday for a place in the 2020 Championship Final, the Louisville Courier-Journal’s Jonathan Saxon found there are no split allegiances this week.

- How did it feel for Phoenix Rising FC goalkeeper Zac Lubin to make the decisive penalty kick save in the fifth round against Reno 1868 FC on Saturday night? “Incredible. I had to do it — to give up that goal in the first half, the first giveaway is tough,” Lubin told Arizona Sports’ Jake Anderson. “Our guys played incredibly, and I knew if I just made one save that we were stepping up cool, calm, collected and our guys were going to put it away.

- New Mexico United’s season on the road came to an end on Saturday night after defeat in a penalty shootout to El Paso Locomotive FC, but the club’s success should see it reach even new heights when it is allowed to play in front of fans in its home state once again. The Santa Fe New Mexican’s Will Webber has more on a season that has further endeared the club to the soccer- and sports-lovers around the state.

- The Charleston Battery’s Nicque Daley has been turning heads this season in the Championship, and the 19-year-old hopes it will give him a chance to make a move up the ladder in the near future. Daley recorded six goals in 18 games this season to help the Battery reach the playoffs for a 13th consecutive year and told the Jamaica Observer, “When I first came into the USL, I knew it was a steppingstone and knew I couldn't afford to get complacent to say that I have made it because I want to play at the highest level of football in Europe, so being in the USL is to develop more and to eventually move forward.”