Rowdies not focused on revenge against Battery; El Paso peaking at perfect moment in second postseason 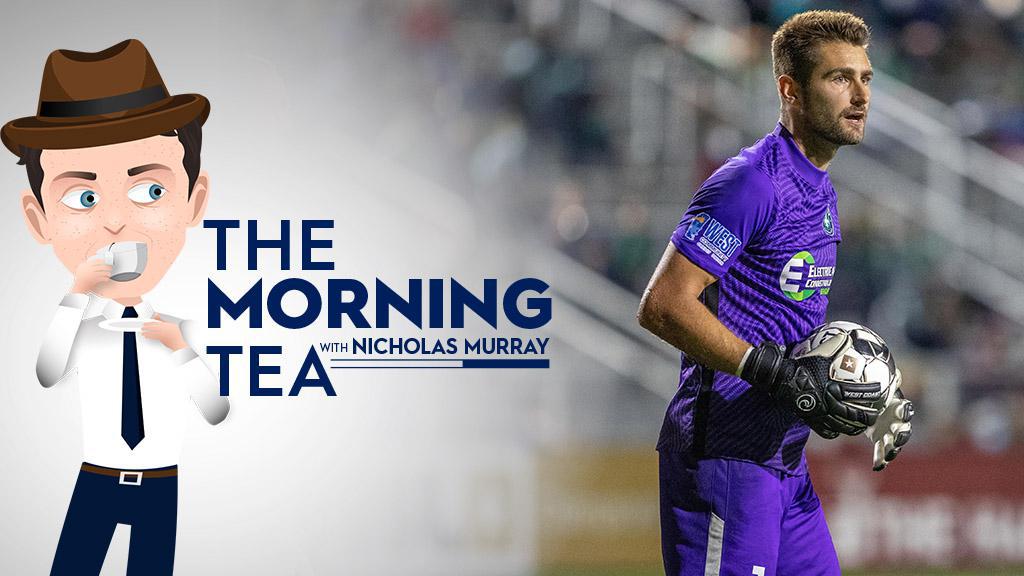 We’ll be down to our final four contenders to lift the trophy at the USL Championship Final by the end of Saturday night. Last year, three road teams pulled upsets on a dramatic Conference Semifinals night. If something similar is going to happen in the final Kings’ Cup showdown ever, then one player in particular may need to shine. Here’s your Morning Tea for Saturday.

As part of Pittsburgh Riverhounds SC a season ago, Kyle Morton earned nomination for the Championship’s Goalkeeper of the Year award, a stellar accomplishment after his first professional season as a full-time starter.

And yet, you might be able to argue his performances this season for Saint Louis FC have been more impressive. Sure, Morton’s shutout numbers have fallen – he’s notched three in 15 starts – but he’s both recorded more saves (56) in 11 fewer games and has a higher overall save percentage (75.7%) than he did a year ago.

That’s made him an essential ingredient to STLFC’s second trip to the USL Championship Playoffs this season, and makes him a key figure if Saint Louis is going to find a way past three-time defending Eastern Conference title-holder Louisville City FC on Saturday night in the Eastern Conference Semifinals.

Morton was certainly essential as Saint Louis earned its first playoff victory last Saturday night against Hartford Athletic. His five-save shutout helped keep the visitors in the game after an early sequence of pressure from their hosts, including a crucial point-blank save to deny an unmarked Aidan Mesias midway through the first half. In postseason games – where key moments become magnified even more – Morton’s stop was as crucial as Joaquin Rivas’ stoppage-time winner in the second half.

According to the 26-year-old, it was a case of practice makes perfect.

“I think it’s the first time all year that I had to make stops like that,” Morton told the St. Louis Post-Dispatch’s Joe Lyons. “But in practice [with STLFC Goalkeeper Coach Brian Jones], we work on situations like that all the time. I was prepared and in position to make the plays I needed to make.”

“The guys have a lot of confidence in Kyle because of the way he’s played all season,” added STLFC Head Coach Steve Trittschuh to Lyons. “With him back there, if there is a mistake, he’s able to clean it up. Against Hartford, he did his job and he kept us in the game.”

Morton has come up with other instances of clutch saves this season. He was nominated for the Championship’s Player of the Month award in July after helping STLFC get out to a strong resumption of the season in their quest for the playoffs, including a four-save shutout as Saint Louis earned its first road win all-time against Louisville on July 18.

If a repeat performance of that result is going to arrive on Saturday night, Morton will again have to be at his best. But he believes he and his teammates are ready for the test LouCity will post.

“Let’s face it, we’ve been battling for the playoffs for the last month or so,” Morton told Lyons. “We know what to expect from Louisville; we know what they’re good at and we know their weaknesses. I think that familiarity gives us an advantage — I’m sure they feel the same way about us — but I definitely feel this is a game we can win.

“Playing at home, they’re going to have the ball for large stretches of the game, so we have to be checked in mentally for the full 90 minutes. We have to make it tough for them to break us down and we have to be dangerous on the counter when we get the chance.”

A little extra for the berm for tomorrow night. pic.twitter.com/VCHZ9Mqvb6

We're finding that just about everyone's cheering for the boys in purple tomorrow, even this St. Louis sports legend. pic.twitter.com/nWDwb4RmZK

We have a special treat for the conductor
A few of @CoachMarkLowry 's favorite Aston Villa players had a special message for him leading up to tomorrow's match pic.twitter.com/3ArzsPH39r

- While the Charleston Battery have handed the Tampa Bay Rowdies their only three defeats this season, there’s no sense of gaining revenge for Rowdies Head Coach Neill Collins when the teams meet for a place in the Eastern Conference Final on Saturday night. “It won’t mean any more beating Charleston because we’re focused on the Rowdies, we’re focused on Tampa Bay,” Collins told the Unused Substitutes’ Jake Nutting.

- As it did in its inaugural season, El Paso Locomotive FC has been primed to peak in the playoff and now carries a 12-game undefeated streak into Saturday’s clash with rival New Mexico United. KROD’s Steve Kaplowicz sets the scene as the Southwestern clubs get set to clash for the first time in the USL Championship Playoffs at Southwest University Park.

- With four prior meetings this season, Louisville City FC Head Coach John Hackworth isn’t expecting any surprises or major deviations from recent games when his side faces Saint Louis FC at Lynn Family Stadium. “I heard [Saint Louis Head Coach Steve Trittschuh] give an interview where he said he’s found his best 11, the best way they’re going to play,” Hackworth told the Louisville Courier-Journal’s Tim Sullivan. “I think we have, too. And then I just think it’s about us going head-to-head and seeing how we execute.”

- New Mexico United faces a key playoff game on Saturday night against El Paso Locomotive FC, but the long-term future of the club got a major boost on Friday as City of Albuquerque officials recommended Creative Arts Agency Icon, a firm with a portfolio filled with high-profile stadium projects, should produce a study that could determine where a dedicated soccer stadium should be built in Albuquerque.

- Reno 1868 FC and Phoenix Rising FC square off for a place in the Western Conference Final on Saturday night in a rematch of Reno’s 2-1 win at Greater Nevada Field in the regular season. Nevada Sports Net’s NSN Daily welcomed Arizona Sports’ Jake Anderson to preview the matchup between two of the highest-scoring teams in the Championship.

- While the playoffs continue this weekend, offseason player movement is underway with Sacramento Republic FC’s Rodrigo Lopez announcing on Twitter that he will not be returning to the club in the 2021 season. Indomitable City Soccer’s Alicia Rodriguez has more on the story.