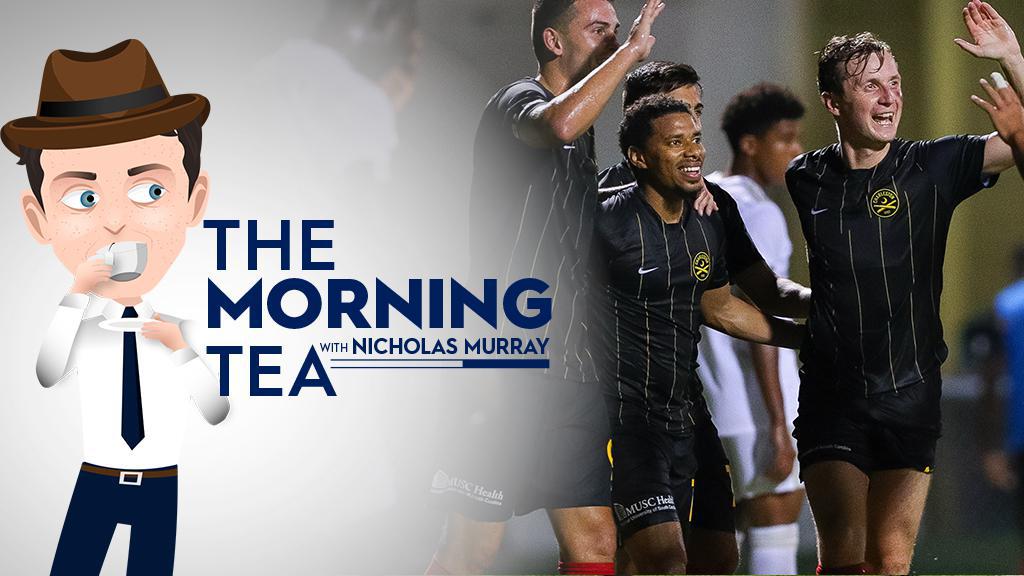 The fraternity of professional soccer players can make a large world small sometimes, which can lead to connection and reconnection on different continents. For the Charleston Battery, those connections have paid off handsomely this season. Here’s your Morning Tea for Friday.

The last time the Charleston Battery’s Zeiko Lewis, Robbie Crawford and Rennico Clarke were in the same squad facing playoff stakes, you could argue there was at least as much on the line as their current attempt to bring the Battery its fifth league title in the 2020 USL Championship Playoffs.

After all, two years ago they were trying to help Icelandic side Fimleikafélag Hafnarfjarðar – more commonly known as FH – through qualifying and into the group stage of the 2018-19 UEFA Europa League.

Sadly, those efforts came up short. FH was eliminated in the second qualifying round by Israel’s Hapoel Haifa 2-1 on aggregate – Crawford had scored in a 3-0 aggregate win in the first qualifying round against Finnish side Lahti – to bring their European dreams to an end.

Reunited in Charleston this season, Lewis and Crawford have been at the forefront of another excellent season for the Battery, while Clarke has provided solid defensive depth. Lewis, though, has good memories of the season he spent overseas before joining Charleston last year.

“It was very cold, but it was nice because we all had our own individual spaces, it was a good environment,” the Bermuda international told The League: World Soccer Podcast this week. “Iceland’s a very nice place to live, I really want to take a trip back, and it’s really nice if you like hiking and nature, things of that nature. The team was also a really good team, and the league was relatively good. The only problem was the short season you get there, but overall, we had good players, we had good team morale.”

Lewis was close with Jamaica native Clarke as the two Caribbean players competed in Iceland, but it was his connection with Crawford that helped pull the midfield duo back together last offseason. As Lewis explained, the Scottish veteran was looking to come to the United States for a change of scenery, and while Battery Head Coach Mike Anhaeuser hadn’t seen the former Rangers FC midfielder play, he asked Lewis about his experience with both Crawford and Clarke at their former stop.

“Coach asked me about them, asked about the things they might be able to bring seeing as how I already knew them before and knew the level of quality they would bring to our team,” said Lewis. “I recommended [Crawford] to Coach, so he came on trial and Coach was impressed with him as well and then he made his way over and into our team.”

As they prepare to face the Tampa Bay Rowdies for a place in the Eastern Conference Final on Saturday night at Al Lang Stadium, Lewis is hopeful he and his teammates can rise to the occasion.

Focused on the week strong pic.twitter.com/oDWDXNahw7

"We earned ourselves one more game and that's all we're focused on."

We are honored to now have an official pre-game Anthem written for Justice by Oakland’s own 2X Grammy Winner @MusicNegrito.

We can't wait to hear all of our fans singing this together at Laney in the near future.https://t.co/LjLVgcR0Jc#OaklandFirstAlways pic.twitter.com/VbAg8uB1FU

- How did New Mexico United thrive on the road this season to reach the Western Conference Semifinals this weekend? The Athletic’s Jeff Rueter found out in a conversation with Head Coach Troy Lesesne, and also revealed his ballot for the Championship’s All-League Team.

- The Miami FC has appointed former Inter Milan and D.C. United executive Michael Williamson as the club’s new CEO as Paul Dalglish remains as Technical Director and Head Coach for the 2021 season. “[Michael] brings to the club a wealth of expertise and experience, not just at the highest levels of soccer in Europe, but in U.S. soccer too given his successful tenure at D.C. United,” said Miami FC owner Riccardo Silva.

- Prior to joining El Paso Locomotive FC on loan this summer, forward Leandro Carrijo had been a key in FC Juarez’s success in the second tier Liga Ascenso in Mexico. The El Paso Times’ Bret Bloomquist spoke to the Brazilian veteran, whose first two goals for Locomotive FC proved key in its playoff opener last Saturday night.

- Even given the continuity the club has achieved within its squad, there’s been an extra buzz at Louisville City FC training in recent weeks that’s been noticeable to 2020 newcomer Corben Bone. “This group is very close, and I’m thankful to be a part of it,” Bone told the Louisville Courier-Journal’s Jonathan Saxon. “That sort of communication, confidence and togetherness only helps you succeed.”

- Reno 1868 FC has been permitted to raise its capacity for Saturday’s Western Conference Semifinal against Phoenix Rising FC to 700 fans at Greater Nevada Field, more than double were in attendance for its opener against the LA Galaxy II. The Reno Gazette Journal’s Duke Ritenhouse has more on the safety protocols that will be in place from the club.