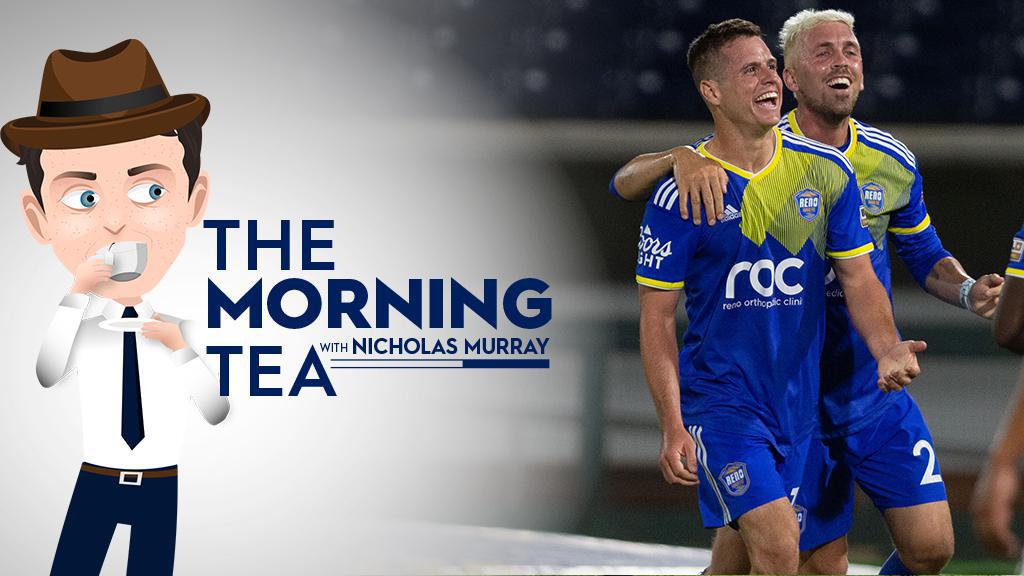 He’s one of the most decorated individuals in the Championship’s history, but Corey Hertzog has yet to achieve the postseason success every player hopes to achieve. He’s hoping to change that with Reno 1868 FC this postseason. Here’s your Morning Tea for Thursday.

For teams that have gone deep in the postseason before, the experience can lend a sense during the regular season of how far along it might be in its goal of succeeding in the playoffs at the end of the year.

For a club like Reno 1868 FC, which had only claimed one win in three postseason trips prior to this season, the benchmarks the side achieves during the regular season can instead provide belief that good things are around the corner.

That’s certainly the way it felt this year for veteran forward Corey Hertzog, who points to key back-to-back wins in August as the point where this year’s 1868 FC squad felt it could be capable of something special.

“I think when everybody started realizing we were a pretty good team was when we beat Phoenix at home and then we also played San Diego away and we won that game too,” Hertzog told Nevada Sports Net’s NSN Live on Wednesday. “That group was probably one of the hardest groups, and we beat the top two teams in that group. I think that’s when teams and we started realizing we had a really good team, we have a good chance at making a good run.”

The third-leading scorer in the Championship’s history, Hertzog has been a central attacking figure at prior stops in his career. He reached the USL Championship Final in 2012 with Wilmington Hammerheads FC as he spent his second professional season in North Carolina on loan from the New York Red Bulls and earned his first Championship All-League selection in the process.

But while Hertzog has consistently found the net at most stops, team success has been more elusive. In 2016 and 2017 he was an All-League selection for Pittsburgh Riverhounds SC, but the Hounds failed to reach the postseason in both campaigns as Hertzog accounted for 27 of the 64 goals the side scored across the two years.

By contrast in Reno – a team that since its launch has been renowned for its attacking capabilities under Head Coach Ian Russell – Hertzog has found a strong surrounding cast. After leading the club in goals in 2019, offseason addition Foster Langsdorf has taken that mantle this year with 11 goals, while Christiano Francois and Tucker Bone have also been strong additions to make a difficult front four that opponents have to deal with.

“[Langsdorf] holds the front line really well,” Phoenix Rising FC interim coach Blair Gavin told Arizona Sports’ Jake Anderson this week. “He and Hertzog have a great relationship where they can rotate because Hertzog is familiar with the front line and Langsdorf can drop underneath. They really try and cause you stress by someone stepping into the midfield and opens up space for a guy to run through.”

A rematch with Phoenix awaits Hertzog and his Reno teammates on Saturday night in the Western Conference Semifinals of the 2020 USL Championship Playoffs. After scoring the goal that earned 1868 FC a 2-1 win when the sides met previously two months ago, Hertzog is optimistic that this could be the year for Reno’s breakthrough.

“I don’t think I’ve ever played on a team where there has been this many guys that have so many goals, and so many game-winning goals and big moments,” he said. “I think that’s what makes this team different from some teams I’ve been on where we’ve lost in playoff games or didn’t make the playoffs because we were expecting one guy to do it all. I think this is a good thing for a good run in the playoffs and the team that we have is putting it up. All the guys in the 11, all the 18, even the guys that aren’t making the bench during the week are pushing us through it. I think we have a good chance at a good run.”

Closing thoughts from the boss:

We love our fans and look forward to exciting times ahead!#Defend210 pic.twitter.com/ivnuRIPkkc

- In an extensive Q&A with Soccer America’s Mike Woitalla, United States U-20 National Team Coach Anthony Hudson said he’s been keeping close tabs on the current crop of players currently making their mark in the USL Championship and League One. “Some of these young players in USL, competing in an adult league, are getting consistent playing time, showing good characteristics, and we also highlight them for [USMNT Head Coach] Gregg [Berhalter].”

- Louisville City FC’s Ben Lundt hasn’t been one of the busier goalkeepers in the Championship this season – in 16 games he’s faced only 44 shots on goal – but he’s made the big stops when he’s needed to in recording eight shutouts. “I’m just trying to help my team whenever I’m needed,” Lundt told the Louisville Courier-Journal’s Jonathan Saxon. “Sometimes you only save one or two shots in the game, that’s when you need to make a play.”

- After claiming its first playoff win in club history, New Mexico United is ready to keep its run going this weekend. The fact that El Paso Locomotive FC stands between it and a place in the Western Conference Final only adds to the club’s preparations. “Obviously, it’s a playoff game so there is always an extra want to win, and the fact that it’s against our rival in El Paso there is that much more to get up for,” defender Sam Hamilton told KRQE’s Jared Chester.

- After four meetings between New Mexico and El Paso during the regular season saw each side emerge victorious once and the other two contests drawn, United forward Devon Sandoval is among those looking forward to the encounter. “He said, ‘Look, this is the way we all want it,’” United Head Coach Troy Lesesne recalled to the Albuquerque Journal’s Ken Sickenger. “Let’s go settle the score. Whoever wins the match is the team that should progress to the Western Conference finals.’”

- Phoenix Rising FC interim coach Blair Gavin is working toward getting out to a fast start as the side hits the road to face Reno 1868 FC on Saturday night in the Western Conference Semifinals. “A lot of the strategy throughout the week that we’re trying to build is once again starting fast and trying to put the game in our terms from a pressing perspective,” Gavin told Arizona Sports’ Jake Anderson.