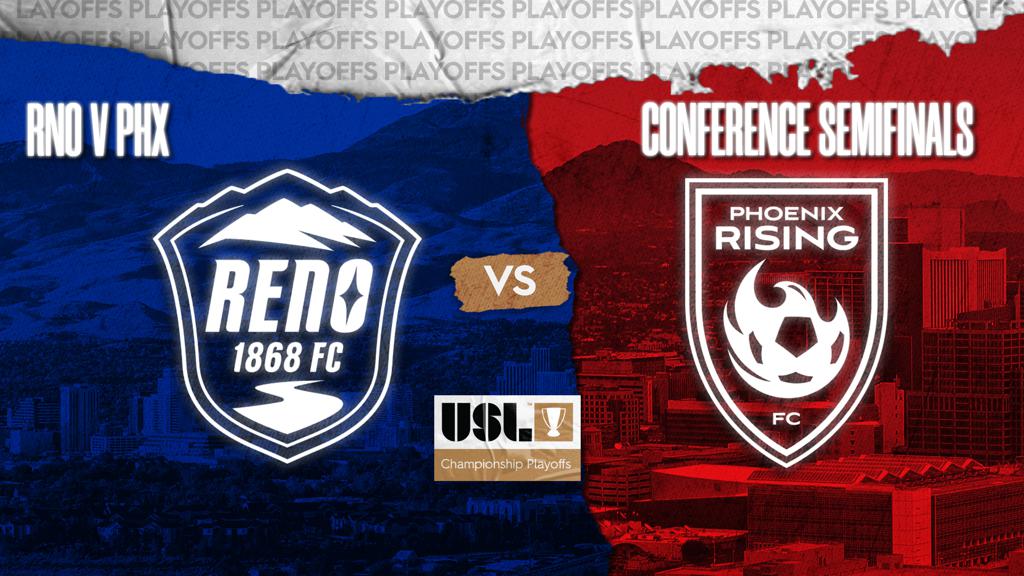 RENO, Nev. – The top two attacks in the Championship’s regular season will meet on Saturday night as Reno 1868 FC hosts Phoenix Rising FC in the Western Conference Semifinals of the 2020 USL Championship Playoffs at Greater Nevada Field. Kickoff is scheduled for 9 p.m. ET.

@Reno1868FC rolled through its opening game of this year’s postseason as it took a 4-1 victory against the LA Galaxy II that saw Corey Hertzog score twice and record an assist to lead the club to its first home playoff win in its history. Reno has now scored 47 goals in 17 games this season, continuing the attacking form that has made it one of the most successful regular season teams since joining the Championship in 2017. Foster Langsdorf also found the net for 1868 FC against Los Dos, and now has 10 goals in his last 11 appearances for the side including the opening goal in Reno’s 2-1 win when Phoenix visited Greater Nevada Field on August 29 in the regular season.

@PHXRisingFC will be looking to reverse that result as it heads to Nevada for a rematch but will be looking to improve after narrowly getting past Sacramento Republic FC 1-0 after extra time on Saturday night at Casino Arizona Field. Solomon Asante scored the only goal in the 114th minute for the hosts as Phoenix registered only two shots on target in a home contest for the first time since a 0-0 draw against Fresno FC on April 6, 2019. Phoenix has historically fared well in Reno prior to this season, though, going 2-0-1 at Greater Nevada Field before its loss in August and will be hoping for a return to that type of form on this visit.

14 – Corey Hertzog’s two-goal game against the LA Galaxy II was the 14th of his career in the Championship across the regular season and playoffs, the most by any player in league history.

13 – Rising FC recorded a season-high 13 shots from outside the penalty area against Sacramento Republic FC, having averaged only 5.6 per game during the regular season.