THE MORNING TEA – LouCity Marks Anniversary with Another Playoff Win

OKC’s Cochran heads on loan to Music City; Reno fans excited to be back for postseason action 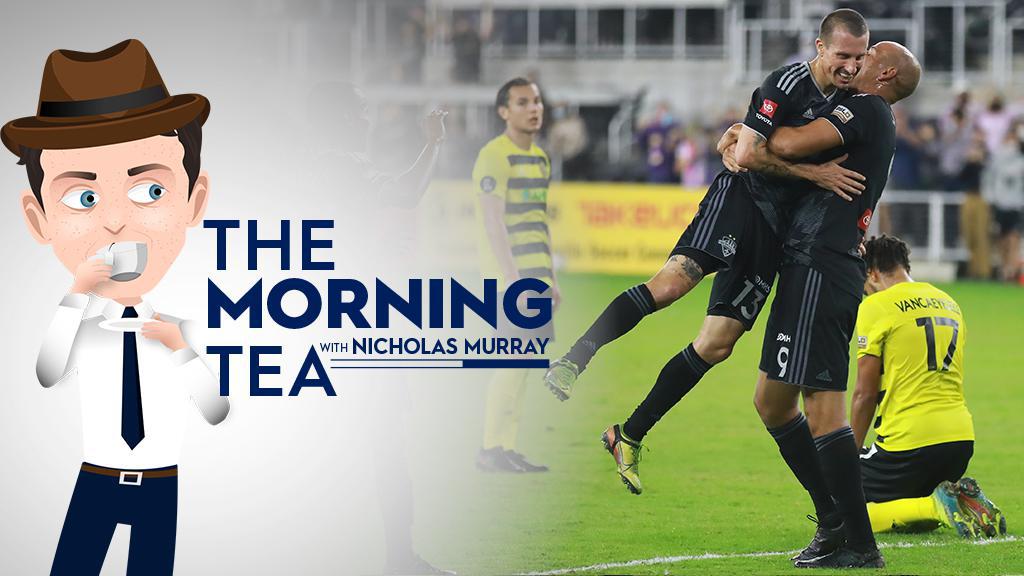 Eight teams are left standing, we’re seven games from crowning a title-winner at the USL Championship Final, and one team in particular continues to turn up the heat now the postseason has arrived. Here’s your Morning Tea for Tuesday.

Saturday night marked the first step on Louisville City FC’s bid to become the first team in the Championship’s history to claim three league titles as it claimed a 2-0 victory against Pittsburgh Riverhounds SC in the Eastern Conference Quarterfinals.

It was a hard-fought win, as most expected it would need to be against a Hounds side that had won four of its previous six visits to Louisville.

“At the water break Oscar [Jimenez] comes over and says, ‘Coach, it’s just going to be a grind the rest of the way,’ and I was like, ‘Hell yeah, it’s going to be a grind so keep doing it,’” said LouCity Head Coach John Hackworth after the game. “I’m really proud because I think Pittsburgh is an excellent team, well-coached, and it was always going to be that kind of competitive match.”

It also came on the anniversary of another notable date in LouCity’s postseason history. You see, October 10, 2015 was the last time Louisville officially lost to an Eastern Conference opponent in the Championship Playoffs.

Think about that for a moment. Since the Rochester Rhinos brought LouCity’s first season in the Championship to an end in the Eastern Conference Final with a 1-0 defeat, it hasn’t suffered a loss in 90 or 120 minutes to any other side in its conference.

In fact, the only time Louisville has walked off the field with no game awaiting it the following week between then and now was after a penalty shootout against a New York Red Bulls II side that included two current players for the U.S. Men’s National Team – Tyler Adams and Aaron Long.

Louisville got its revenge for that elimination – which officially counted as a draw on its record – the next two years as it defeated the Red Bulls II first in a penalty shootout in 2017 and then in a 5-1 romp in 2018 on its way to a pair of titles. But, overall, LouCity has not suffered a defeat in regulation or extra time to another conference foes in 13 consecutive games after Saturday’s victory.

There were individual threads on Saturday that went back to that night in Rochester, too. For one, LouCity now features two of the Rhinos that claimed victory that night with Sean Totsch and Pat McMahon on Hackworth’s back line. Hounds Head Coach Bob Lilley was again in the opposing technical area on Saturday, while Steevan Dos Santos and and Kenardo Forbes are as important now for Pittsburgh as they were for the Rhinos.

In the present, though, LouCity’s win against the Hounds has made it a clear favorite to represent the Eastern Conference in the Championship Final for a fourth consecutive season. FiveThirtyEight.com rates LouCity a 47 percent chance to be there on November 1 against the Western Conference title-winner, and a 26 percent chance to claim it all again after this weekend’s results.

It also hammered home something that Saint Louis FC, the Tampa Bay Rowdies or Charleston Battery are going to have to get to grips with either this or next week.

Until proven otherwise in the postseason, Louisville City FC runs the East.

Already super proud of how many #USL clubs are embracing the platform, while working to build their own local youth to pro pathways... stay tuned for big news the next few wks! #UnitedForSoccer pic.twitter.com/ZRecmE1Q2i

In 2018, San Jose drafted Danny Musovski and stashed him at Reno. After one year, they cut him and he joined Reno permanently, scoring 11 goals in 2019 + catching #LAFC's attention for a free transfer.

- Did you catch the first collaboration between Black Arrow FC, the USL Black Players Alliance and the USL that dropped on Saturday afternoon? Make sure you check out the first video in the new series, featuring the Charlotte Independence’s Brandon Miller and Hugh Roberts.

- OKC Energy FC’s CJ Cochran will spend the remainder of the 2020 season on loan with Nashville SC in Major League Soccer, and Nashville has a transfer option to bring the goalkeeper in on a permanent deal when the loan expires. Cochran previously played for NSC when it joined the Championship in the 2018 season, making eight appearances for Head Coach Gary Smith’s squad.

- Former Tacoma Defiance midfielder Jesse Daley has headed home to Brisbane, Australia, where he’s set for top-flight action in the A-League next season after signing with the Brisbane Roar. Daley made 50 appearances for Tacoma, but came up through the Roar Academy before turning professional and in the club’s press release said he was grateful for the time he’d spent in the Pacific Northwest.

- A little over a year ago, Danny Musovski was earning his second Championship Player of the Week award for Reno 1868 FC. On Monday, he claimed his first in Major League Soccer after a standout performance on Sunday night in Los Angeles FC’s victory against Seattle Sounders FC.

- Pittsburgh Riverhounds SC was eliminated at the hands of Louisville City FC for a second consecutive postseason in frustrating fashion on Saturday night. Pittsburgh Soccer Now’s John Krysinsky took an in-depth look at how it played out and handed out grades for the Hounds on the night.

- Reno 1868 FC had fans in the stands for the first time at Greater Nevada Field on Saturday night with 250 admitted for its playoff contest with the LA Galaxy II. The Nevada Appeal’s Carter Eckl spoke with players and fans about the experience, and what it meant to hear the support back in the venue again.