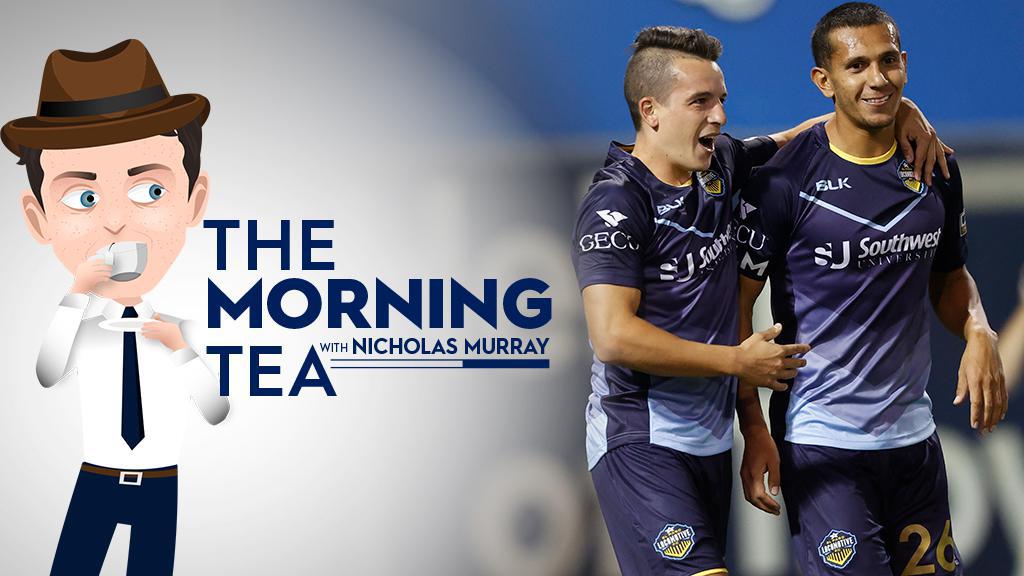 Two days to go until the 2020 USL Championship Playoffs, and the anticipation is starting to rise for an intriguing Saturday night. Here’s your Morning Tea for Thursday.

In the cauldron of the postseason, finding ways to put pressure on opponents early can be a key element in whether a side will advance to the next round or see its season come to an end.

For El Paso Locomotive FC Head Coach Mark Lowry, whose side is preparing to take on FC Tulsa in Saturday’s Western Conference Quarterfinal at Southwest University Park, that means finding a way to get on the scoreboard quickly.

“We have to score early,” Head Coach Mark Lowry told KTSM’s Colin Deaver. “When you score early like we did at Monarchs, then we’ll go get two or three. That’s been the goal for us all season is to try to get on the board earlier in games.”

Early leads haven’t been that common for Locomotive FC this year. Only nine of the club’s 24 goals have come in the first half overall, and on only three occasions has the side recorded a goal inside the opening 15 minutes. Dylan Mares’ eighth-minute goal against Real Monarchs SLC last Sunday afternoon was the earliest the side has scored in a game this season.

While that’s the case, though, there have been few teams this season in the Championship as good as El Paso when it comes to retaining leads. Locomotive FC’s 11-game undefeated streak to close the regular season has seen the side trail only once, and in that outing it rallied to defeat rival New Mexico United 3-2 thanks to Mares’ game-winning goal in the 88th minute.

Now the side is aiming to use its most lopsided victory this season – and a five-game shutout streak – as a springboard to postseason success.

“Going into last year’s playoffs we lost that game at LA Galaxy II and I think that lit a fire under us that we had to step it up because it’s playoffs,” Locomotive FC goalkeeper Logan Ketterer told Deaver. “I think we hit that a week earlier where we were disappointed to not come out of Colorado Springs [on September 30] with a win and clinch first place, so I think that lit a bit of a fire.”

If El Paso is to advance, it will have to do so without the services of Omar Salgado, who suffered a torn ACL two weeks ago and joined defender Chiro N’Toko on the sidelines.

But with an expected 1,600 fans set to be on hand after the club announced it had sold out the tickets allocated for socially-distanced attendance, Locomotive FC believes it can at least emulate its run to the Western Conference Final a season ago.

.@RobStoneONFOX is of victory on Saturday...

How it started How it’s going pic.twitter.com/nDzdr7VtTM

- United States youth international goalkeeper Aaron Cervantes, who joined the professional ranks with the Championship’s Orange County SC aged 15 years old in March 2018, has joined Rangers F.C. on a transfer agreement that will see him soon head to Europe. ESPN’s Jeff Carlisle has more on Cervantes’ progression since joining OCSC, and the strengthening of the partnership between Rangers and Orange County.

- Under Phase 3 of the State of Connecticut’s reopening plan, Hartford Athletic will be able to welcome up to 2,200 fans – or 40 percent of capacity – to its Eastern Conference Quarterfinal against Saint Louis FC on Saturday night. The Hartford Courant’s Shawn McFarland has more on what Athletic chairman Bruce Mandell says is the “biggest game in Hartford professional sports since 1986.”

- There’s something to be said of having the experience of a successful postseason run under your belt. After helping Real Monarchs SLC claim the USL Championship Final a season ago, New Mexico United defender Kalen Ryden is hoping to use that run to accomplish the same with his new club as KOB’s Brandon Ortega found out.

- Reno 1868 FC has been one of the strongest clubs in the regular season over its four seasons in the Championship, but postseason success has so far been elusive. Head Coach Ian Russell joined Neveda Sports Net’s NSN Daily to look ahead to Saturday’s Western Conference Quarterfinal with the LA Galaxy II, where 1868 FC will look to claim its first home playoff win in its history.