TAMPA, Fla. – The USL Championship announced the Team of the Week Presented by Cleer Audio for Week 15 of the 2020 regular season on Tuesday, with Memphis 901 FC forward Cal Jennings named Player of the Week after recording his first professional hat trick on Saturday night at 901 FC ended its season with a 3-1 victory against Birmingham Legion FC.

A former standout at the University of Central Florida, Jennings ended his first professional season on a scoring roll. The Georgia native led Memphis to victory against postseason-bound Legion FC with his hat trick, which gave the 23-year-old eight goals in his final seven appearances of the season.

Jennings earned 43 percent of the ballot for his performance as he was named to the Team of the Week for a second consecutive week. Orange County SC’s Chandler Hoffman finished second on 33 percent after he also notched a hat trick on Saturday night to lead his side to a 4-2 victory against Las Vegas Lights FC. 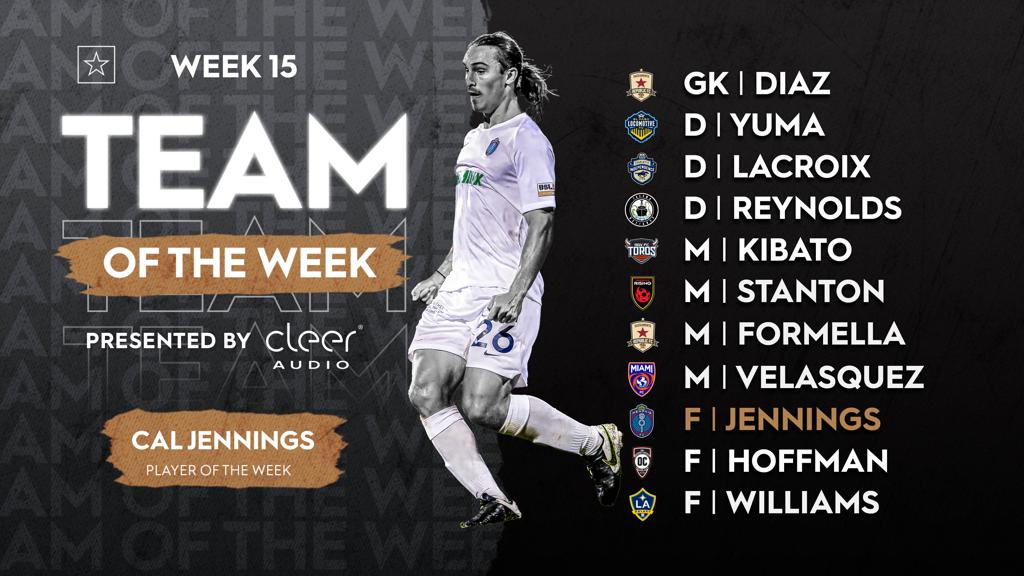 D – Duke Lacroix, Charlotte Independence: Lacroix put in a strong shift as the Independence shut out North Carolina FC to clinch first place in Group G with a 1-0 win, winning 7 of 9 duels and 2 of 2 tackles, while completing 46 of 51 passes.

M – Kembo Kibato, Rio Grande Valley FC: Kibato recorded a pair of assists and completed 22 of 24 passes overall while winning 5 of 8 duels and 2 of 2 tackles in the Toros’ 4-2 victory against OKC Energy FC to close the regular season.

M – Sebastian Velasquez, Miami FC: Velasquez had two goals and one assist across two games as Miami wrapped up the season with wins against the Charleston Battery and Atlanta United 2, while completing 30 of 38 passes overall.

F – Augustine Williams, LA Galaxy II: Williams scored three goals across two games, including a pair of tallies as Los Dos clinched a place in the 2020 Championship Playoffs with victory against Orange County SC, and completed 29 of 35 passes for the week.