After confirmation of Group H win, Tampa Bay still has chance to be No. 1 overall seed in playoffs 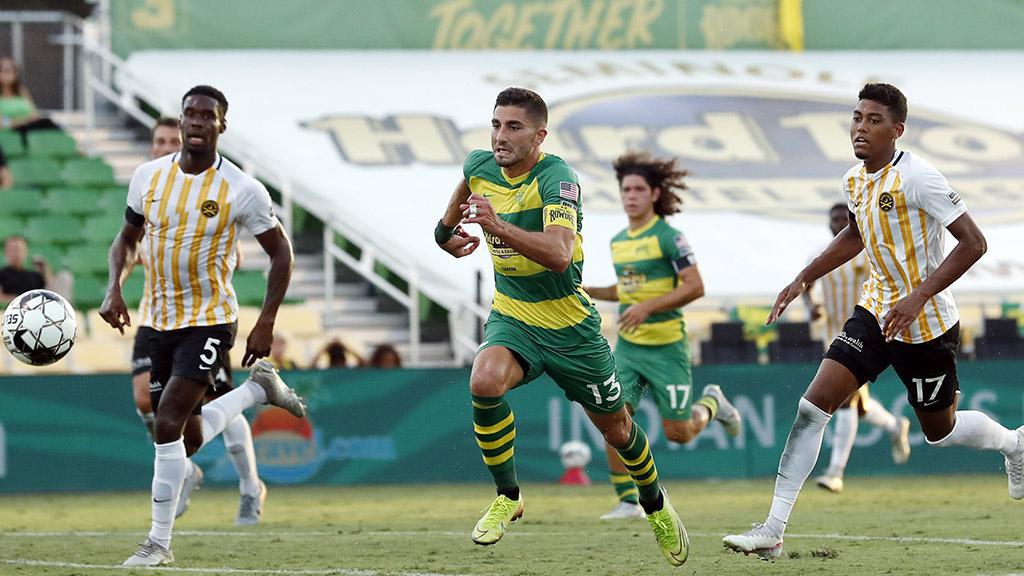 With a victory against Charleston, the Rowdies would move to 36 points and not only finish with the best record in the Eastern Conference, but also put themselves in with a chance to surpass the Western Conference’s Reno 1868 FC and San Antonio FC for the top seed in the 2020 Championship Playoffs overall.

“This group, we’ve said it, we’re not battling against Charleston or Miami or Atlanta, we’re battling how good can we be as a group,” Rowdies Head Coach Neill Collins told media on Thursday. “We’ve got the opportunity on Saturday to be the first seed in the whole of the USL, and the players have put us in that position. Our aim is to go out and put in a performance that gives us a chance of being the No. 1 seed in the whole of the USL, and that’s a credit to the guys.”

The Rowdies enter the final weekend of the season level on points with Reno and San Antonio, but the two Western Conference clubs currently hold superior goal differentials with 1868 FC on +21 and San Antonio on +17 compared to Tampa Bay’s +15. That means the Rowdies either need their biggest win of the season, or for both Reno and SAFC to drop points in their final games on the road against Tacoma Defiance and Austin Bold FC, respectively.

Tampa Bay is going to have its own challenge against the Battery, though, who will be looking to rebound from a 4-3 defeat to Miami FC on Wednesday night that ended their chances of passing the Rowdies on points-per-game in Saturday’s matchup. Charleston has also taken victory in the past two meetings between the sides on home turf at Patriot’s Point, a pair of results the Rowdies are looking to reverse.

“Charleston’s a very good team, they’ve gotten incredible results this year,” said Rowdies defender Forrest Lasso, who spent his first three season as a professional with the Battery. “But for us, those results for us weren’t all Charleston’s to give the reward to. I think we’re a very talented team and at times this year our biggest opponent has been ourselves, so like we’ve been saying if we can focus on ourselves and iron out the couple of wrinkles on our shirt, it’s going to be tough for somebody else to beat us out there. I think this week has shown that, we’re smoothing things out and getting ready for the final product.”

That introspection on what individuals and the collective group can accomplish to give itself the best chance of raising the second title of the club’s modern era is maybe what has given Collins the most enjoyment as the Rowdies’ sideline boss this season.

“This team has been such a joy to work with because we’ve been able to add people like Forrest, Aaron Guillen, Jordan [Scarlett], Evan [Louro], you can go through the lot,” said Collins. “From the first day of preseason we set a standard of every team across the league, what do you want to achieve? You want to win a championship? Well, of course. Who doesn’t want to win a championship? Who doesn’t want to win on Saturday night, right? How are we going to approach that?

“Last year was every game at a time, this year it was every day at a time. Let’s get better every day and the players have really stuck to that. Forrest is the first on the training field every day getting himself warmed up, doing little exercises. Win, lose, or draw, he’s ready to do that. Jordan Scarlett wants to do more at the end of practice. All of these guys in their own way are trying to get better.”

Collins is certainly expecting a strong test from the Battery, who will be looking to put a performance that saw it let a two-goal lead slip in the second half quickly in the rear-view mirror as it prepares for its own postseason run.

“[Battery Head Coach] Mike Anhaeuser hasn’t been in the game for that length of time to say, ‘well, we’ll throw the towel in,’” said Collins. “So, whatever happens on Saturday night, win, lose, or draw, then we’ll have a playoff game to look forward to and we’ll learn something from it.

“I do believe, though, that these players are preparing themselves to put in a performance that reflects well on themselves.”