THE MORNING TEA – So, How Did Danny Barrera Pull That Goal Off Anyway? 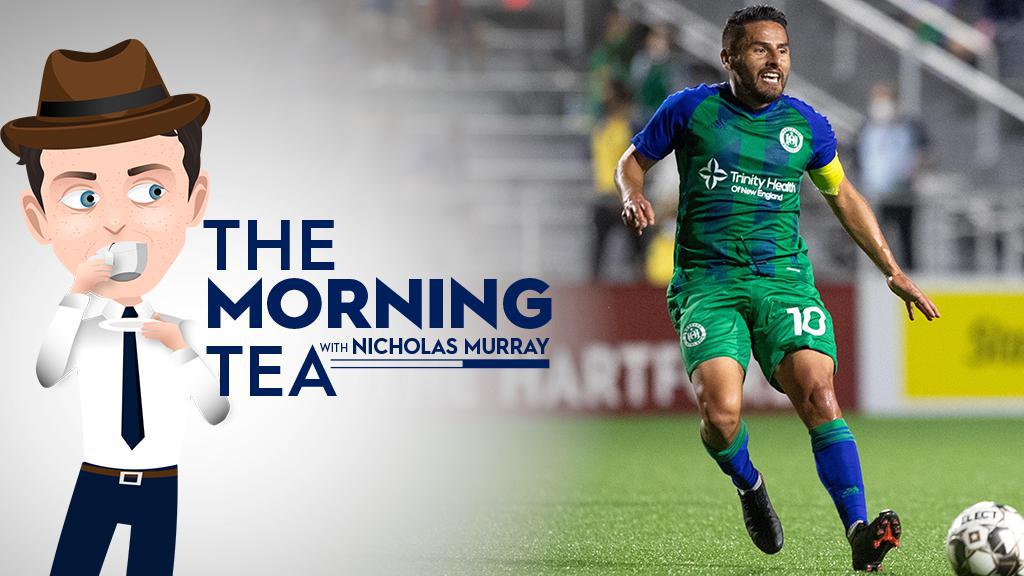 We’re one day away from the final weekend of the regular season, where there are still four postseason berths up for grabs. But to start today, a look at what’s now been dubbed in Hartford as the The Immaculate Deflection. Here’s your Morning Tea for Friday.

For Danny Barrera, the ninja kick is the sort of move you throw up at practice, and one that can have practical applications around the home.

In a real live game, though? Well, executing it there is a bit out of the ordinary.

“It’s something that I kind of always do when I’m defending, not necessarily the best way to defend, but you kind of just bait them in a little bit, make them feel like that space is available,” Barrera told the Nutmeg State Podcast on Thursday. “It’s kind of funny because I do stuff like that at practice all the time, or even at home – I don’t know how many diapers I’ve tried to ninja kick into the trash – and finally I got one in, I guess.”

You can say that again.

Barrera’s miraculous game-winner on Wednesday night for Hartford Athletic against the Philadelphia Union II is the sort of goal that comes around maybe once in a career. It rapidly flew around the world being viewed on social media and sports news websites, a moment hanging in time for a young club and a veteran player.

“I didn’t know [it was going to go in] until it went in, to be honest,” Barrera said. “If you see, I’m staring at it and thinking like, honestly this went through my head, ‘this might bounce and hit the post.’ … I shouldn’t have been watching it, I should have been trying to follow it up, because you never know, you know?”

But for Barrera, what mattered more than the aesthetics of the goal was the significance of the result it produced. If Wednesday’s game against the Union II had ended in a draw, all the work of Hartford’s win last Saturday night against the Pittsburgh Riverhounds SC would have been quickly undone. Now with a 3-2 win, the Athletic control their chance of claiming first place in Group F when they face the New York Red Bulls II on Sunday evening.

“I don’t really like all that attention that much – my wife loves it, that it’s happening and stuff – but for me the goal is cool, it’s a goal I’ll never forget, but I was really more happy about winning that game,” Barrera said. “That was really what I was thinking more than how crazy the goal was, I was thinking like, ‘thank god we were able to win this game so we can have a chance at a home game.’ I want my family there as well.”

With a win against the Red Bulls II on Sunday, Barrera will get his wish.

“Having a home game is everything for us,” he said. “The fans deserve it, the club deserves it, it’s the least we can do if we have that opportunity.”

- Colorado Springs Switchbacks FC said goodbye to Weidner Field on Wednesday night, playing its final game at the venue the club has called home for its first six seasons before moving into its new 8,000-seat downtown stadium next year. After the draw with El Paso Locomotive FC, the fans said thank you to the fans that had followed them throughout the club’s life so far. “It’s crazy how many of them I know by name,” Jordan Burt told the Colorado Springs Gazette’s Vinny Benedetto. “Just appreciative of them supporting us through all the ups and downs. This is a special place.”

- Indy Eleven was unable to close out a playoff place against Sporting Kansas City II on Wednesday night, and that means a quick turnaround to Saturday before its showdown with Saint Louis FC for a place in the postseason. “First of all, we just have to get recovered,” Indy Head Coach Martin Rennie told the Indianapolis Star’s Kevin Johnston. “We have to take our time and do that tomorrow and then just focus in on what we need to do. Obviously, we know a lot about the opponent. We know what we need to make happen.”

- Reno 1868 FC was guaranteed at least one home playoff game in the postseason after Wednesday night’s Silver State Cup clash with Las Vegas Lights FC, and the club is hoping some fans will be on hand at Greater Nevada Field to witness it. “During these unprecedented times, we have made the health and safety of our community our first priority,” said President Eric Edelstein in an open letter to fans. “We will continue to do so, but we believe that hosting 10 percent of our capacity provides an extremely safe entry point to welcome our community back to live entertainment.”

- Louisville City FC will need help from the Charleston Battery on Saturday night to overtake the Tampa Bay Rowdies for the No. 1 seed in the Eastern Conference, but the side is ready to hold up its end by defeating Sporting Kansas City II in its regular-season finale at Lynn Family Stadium. “That’s our goal, I mean the club has done a lot for us in building an amazing stadium, so the least we could do is play in it,” defender Alexis Souahy told WLKY’s Natalie Grise.

-  New Mexico United fans got the chance to cheer on their team together thanks to a drive-in broadcast of Wednesday night’s game, and didn’t waste their chance to show the love during the match against Real Monarchs SLC. “It really is a family, these fans,” United Director of Communications & Fan Experience David Carl told KRQE. “It’s a blast, just to have everybody in one place in a safe way is awesome.”

- Pittsburgh Riverhounds SC finds itself in a position where it has to find victory on Saturday night against the Philadelphia Union II and then hope for help from the New York Red Bulls II on Sunday to claim first place in Group F after Hartford’s dramatic win on Wednesday. “I think we all knew that we gave something back,” Hounds Head Coach Bob Lilley told Pittsburgh Soccer Now’s John Krysinsky. “We desperately didn’t want to open the door for them [Hartford]. There’s a recognition that we have important games coming up. There’s a desire to make things right.”

- Sacramento Republic FC losing its penultimate game of the regular season to Tacoma Defiance wasn’t the result it was looking for on Wednesday night. But, as Indomitable City Soccer’s Alicia Rodriguez explains, it might not have been the worst thing for Republic FC to hit a bump in the road as it gets ready for the postseason next weekend.