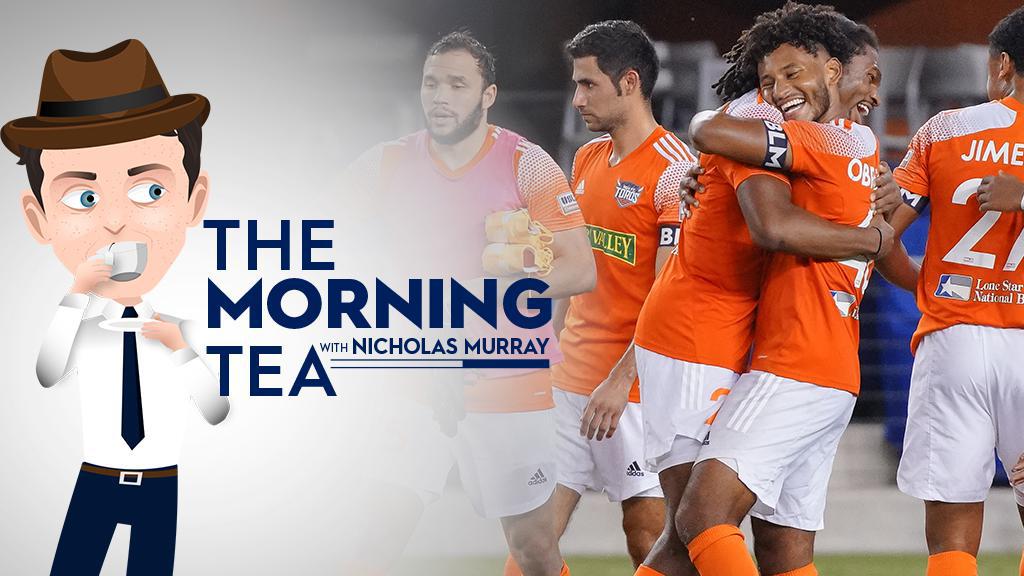 After a Wednesday night that saw one playoff place claimed, and three other teams still waiting to earn their ticket to the postseason, a successful return to the field in South Texas provided one club with a bright moment in a tough season, and another the potential keys to the playoffs. Here the Morning Tea for Thursday.

It’s been a hard season for Rio Grande Valley FC, especially in recent weeks when postponements saw the team not take to the field for more than three weeks down the home stretch of the campaign.

That lack of games meant the team’s lack of wins continued to hang over the Toros’ collective heads. The lone side yet to claim three points in the 2020 season, their preparations had been limited in the buildup to a return to action on Wednesday night.

But as the final whistle blew at H-E-B Park against Austin Bold FC, a moment of joy arrived for the players, staff and a little over 700 fans that were admitted under social distancing protocols.

The Toros were winless no longer.

“I don’t know, we might not be training for the rest of the year if this is gonna happen,” joked Head Coach Gerson Echeverry after the club’s 2-0 win against Bold FC. “It’s been hard, there’s so many things that stays within our team that I don’t think that people realize what these guys have been through and I am so proud of these guys and everything that they’ve done.

“I am not just talking about the result point of view, just everything that they’ve done, and they’ve been able to overcome, and I think people from the outside know, maybe 10 to 20 percent. So, it makes me extremely proud of everything and one thing that you can see is that win, lose or draw, I think these guys have left everything on the field.”

The commitment from the Toros to getting it right might have best been exemplified by their opening goal. Getting to the free kick delivered by Isidro Martinez required both timing and bravery from forward Kyle Edwards, who had to absorb heavy contact from Austin goalkeeper Diego Restrepo after winning the race to the ball and directing his header goalward.

It was an all-in moment, giving up the body for the reward of a goal.

“I would do anything for my team, so when the ball came in, I was like ‘I’m just going,’” said Edwards. “I [used to] play with Isidro in college and I notice how he could play those balls, so I just ran in, I put my life on the line for the team and put it in the back of the net. It was pain but it was worth it.”

The impact of Edwards’ goal – and a late insurance marker by Juan Carlos Obregón Jr from the penalty spot – wasn’t just felt in South Texas. It resonated all the way to Tulsa, Oklahoma, where FC Tulsa had earlier in the night claimed the Black Gold Derby with some more late dramatics in a 3-2 win against OKC Energy FC.

The Toros’ win put Tulsa on the precipice of a return to the playoffs, now a 97 percent chance to finish second to San Antonio FC according to fivethirtyeight.com.

But for the Toros, it was something to feel great about, too.

“That’s what we’ve been asking,” said Echeverry. “It’s what we’ve been doing all year long, except minus the mistakes. So fortunately, we were able to get a result and show our fans, send them home with a victory which was needed not only for them but for us and the hard work that our players have been putting in.”

Our name in LIGHTS.

We love the support our city and our wonderful partner @WilliamsUpdates.

- From starting out at Orange County SC to earning All-League selection with Sacramento Republic FC, Josh Cohen is now featuring for Israeli club Maccabi Haifa, competing in the Europa League and finding his place in a top-flight league. The Athletic’s Jeff Reuter has more on Cohen’s story, and what he learned along the way to his current club home.

- One more team booked its place in the 2020 USL Championship Playoffs on Wednesday night as the LA Galaxy II defeated Orange County SC 3-1 at Dignity Health Sports Park to earn a second consecutive playoff berth. Los Dos moved clear of Orange County and San Diego Loyal SC with their victory, which saw Augustine Williams move into second place in the race for the Golden Boot with 12 goals.

- Indy Eleven wasn’t able to claim its place in the postseason, however, as Sporting Kansas City II took its second victory at Lucas Oil Stadium thanks to a goal by 17-year-old Bailey Sparks on his professional debut. Indy will now have to go to Saint Louis FC on Saturday night and earn at least a draw to finish in second place in Group E, while victory for STLFC would vault it past Indy and into the postseason.

- FC Tulsa took its first lead with only two minutes to go, but the combination of Tobenna Uzo and Cristhian Altamirano came off the substitutes bench to dramatic effect in a 3-2 victory against OKC Energy FC. The Tulsa World’s Barry Lewis was on hand to see the hosts lift the Black Gold Derby wrench and move to the verge of a postseason berth.

- As you might have guessed from the clip in the Social Circle, Hartford Athletic’s Danny Barrera had the soccer world abuzz on Wednesday night, and landed on the SportsCenter Top 10 in the No. 2 slot for his remarkable finish against the Philadelphia Union II. As importantly, though, it lifted the Athletic into first place in Group F, one point ahead of Pittsburgh Riverhounds SC, as the sides head to their final games of the season this weekend.

- Miami FC rallied from a two-goal deficit to earn a 4-3 victory against the Charleston Battery on Wednesday night as Sebastian Velasquez led the hosts with a goal and assist. The win was Miami’s second at home this season and broke the Battery’s nine-game undefeated streak.

- A second-half goal by Joris Ahlinvi gave New Mexico United a 1-0 victory against Real Monarchs SLC and kept their hopes of finishing first in Group C alive at Zions Bank Stadium. United’s win saw it move within two points of El Paso Locomotive FC – which drew 0-0 against Colorado Springs Switchbacks – for first place ahead of this weekend’s action.

- Reno 1868 FC was held to a 2-2 draw by Las Vegas Lights FC, but still claimed the Silver State Cup and first place in Group A thanks to goals by Foster Langsdorf and Sparks, Nevada native Kevin Partida. 1868 FC had defeated Las Vegas in their prior meeting this season, while Sacramento Republic FC’s defeat to Tacoma Defiance earlier in the night had already clinched top spot in the group for Reno.