THE MORNING TEA – Some Deserved Praise for OKC Centurion Laurendi 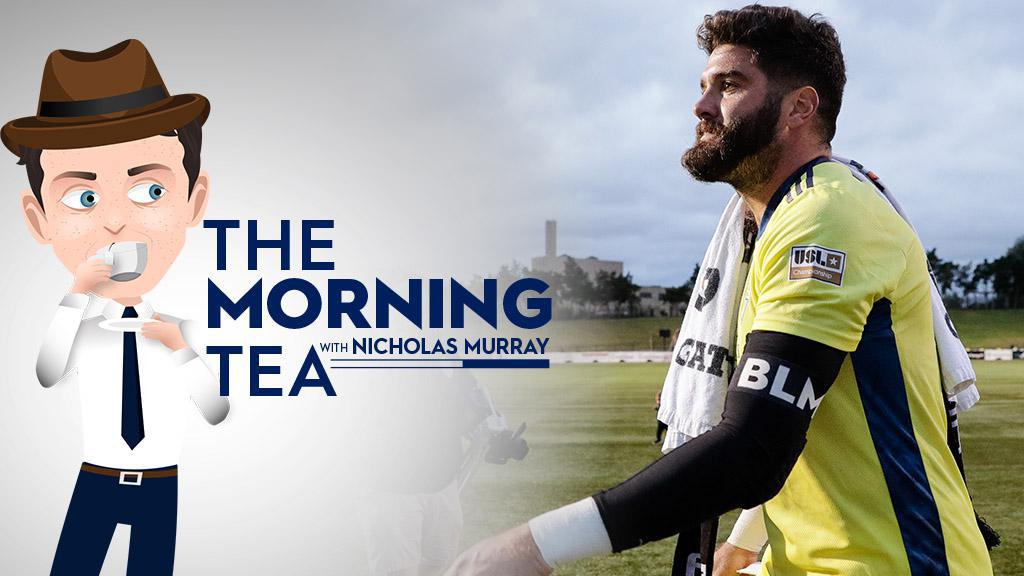 We're into the final week of the regular season, and with five playoff places still up for grabs there's a lot to be decided in the coming days. To start today, though, let's take a look back at a landmark moment for one of the league's most respected and well-liked figures on the field. Here's your Morning Tea for Tuesday.

Sad to say, there’s not been that much to smile about for OKC Energy FC fans this season.

But on Sunday, in the wind at Taft Stadium, the club got to celebrate a ray of sunshine as it paid tribute to longtime goalkeeper Cody Laurendi.

Making his 100th appearance for the club, the Florida native and Puerto Rico international put in another of the performances he’s become known for in the Championship over the past seven seasons, bagging a five-save shutout and a standout penalty kick save to earn his side a point against playoff-chasing Austin Bold FC.

And – true to form – Laurendi gave credit to everyone else after the final whistle had blown.

“First and foremost, credit to all of my teammates, my coaches,” he said at the postgame press conference. “[Energy FC goalkeeper coach] Alexis [Vizarelis] and I, and [fellow Energy FC goalkeeper] CJ [Cochran], we do our homework. That was proof positive there, making that save. Earlier in the day he sends me the [penalty kicks] and we kind of decide where we’re going and we go with it, so credit to the work you put in, the homework you do before to get the final product.”

The work you put in. It’s a fundamental of many goalkeepers in the Championship that find the longevity and success that Laurendi has. But it’s arguable that anyone has done it with quite the upbeat attitude and optimism that the 32-year-old has over a career that has now stretched more than a decade. From playing in Belgium after competing collegiately at the University of South Georgia to stints with the Puerto Rico Islanders, Fort Lauderdale Strikes, LA Galaxy II, Austin Aztex and now Energy FC, there’s always been something remarkably endearing about the way Laurendi has carried himself.

If you’ve been fortunate enough to encounter Laurendi away from the field – as I have been, myself – it’s hard not to find pleasure in his successes. The reaction of many fellow goalkeepers, and current and former teammates, to Sunday’s milestone and the performance showed the regard in which he’s held by his contemporaries.

Honored to have done battle with this fella more than a few times. I’ll just say what everyone else is saying. LEGEND!!! @CLaurendi23 #salute https://t.co/4qm4ujEF8h

Congrats big man @CLaurendi23 a pleasure to have played against you in your 100th game. Big save my man. Always great to share the field with you #GKunion https://t.co/mLeFjegRbF

The epitome of “great player, even better person.” Could not be happier for @CLaurendi23 as he earned us a shutout on his 100th appearance for the club https://t.co/clJirTaG4y

Congrats to @CLaurendi23 on 100 club appearances for @EnergyFC ! What a great accomplishment and something you should be proud of. Not a bad game to have for the 100th as well #congrats #respect

What a moment this is @CLaurendi23 ! An incredible achievement by an incredible guy Congrats big man! https://t.co/nTlmWhlPfL

And there’s going to be no slowing down here. Currently in fourth place in the Championship all-time in saves, and tied for fourth in shutouts with 36 in the regular season after Sunday night, Laurendi is eager for more in the years to come.

“It’s things that I value. Longevity, focus, consistency,” said Laurendi. “It can be a lonely life as a goalkeeper sometimes, and that’s not to be dramatic, but it's just the reality of the position. So, to get to that milestone – look I want more. I want more games, I want to set the record here, I want many more years, but this is a small victory for not only myself, but everybody who’s positively affected me throughout this journey.”

All we needed was one.#ADayLater

- The United Soccer League and USL Black Players Alliance announced on Monday the creation of partnerships with Activote and the Civic Alliance. The new partnerships are aimed toward increasing voter awareness and participation in upcoming national, state and local elections.

- North Carolina FC will face the New York Red Bulls II on Wednesday evening at City Stadium in Richmond, Virginia as both sides add a game to their schedule following the cancellation of their respective contests against Loudoun United FC. NCFC’s game against the Charlotte Independence, originally scheduled for Wednesday night, will now be played on Saturday at Sahlen’s Stadium at WakeMed Soccer Park.

- Sacramento Republic FC’s leaders – led by Head Coach Mark Briggs – decided to hand the captain’s armband to Drew Skundrich ahead of the new season. As the Sacramento Bee’s Richard Ivanowski reports, the 25-year-old has embraced the role. “He gives everything every single time he steps on the field, whether it’s a training session or whether it’s an actual game,” Briggs told Ivanowski. “Drew embodies everything that we want to be as a club and as a team.”

- New Mexico United didn’t get the result it needed to close the gap on El Paso Locomotive FC on Saturday night, but Devon Sandoval believed it showed the growth the side has achieved in its second season, which has put United in the USL Championship Playoffs. “We’re more resilient, guys are more experienced,” Sandoval told the Albuquerque Journal’s Randy Harrison on Monday. “I think if it’s the same team we had last year, in the situation we’re in, I don’t think we’d be in second place right now. Guys have stepped up.”

- Phoenix Rising FC is back in the playoffs for a fourth consecutive season and is in line to finish in first place in Group B as it heads into its final two games of the season, but the performance his defense put in during Saturday’s 1-0 win against Orange County SC was the most pleasing aspect for Head Coach Rick Schantz. “I told the guys, the back four, back five, even Zac (Lubin) – that’s the kind of game that shows you can win championships,” Schantz said postgame on Saturday night. “You have to be able to play like that. It’s not the best football, but we’ve never really been able to do that since I’ve been here.”