THE MORNING TEA – Why Two Candidates for Golden Glove Aren’t on the Leaderboard, Yet

LouCity getting back in-sync ahead of postseason; New Mexico heads to the Drive-In 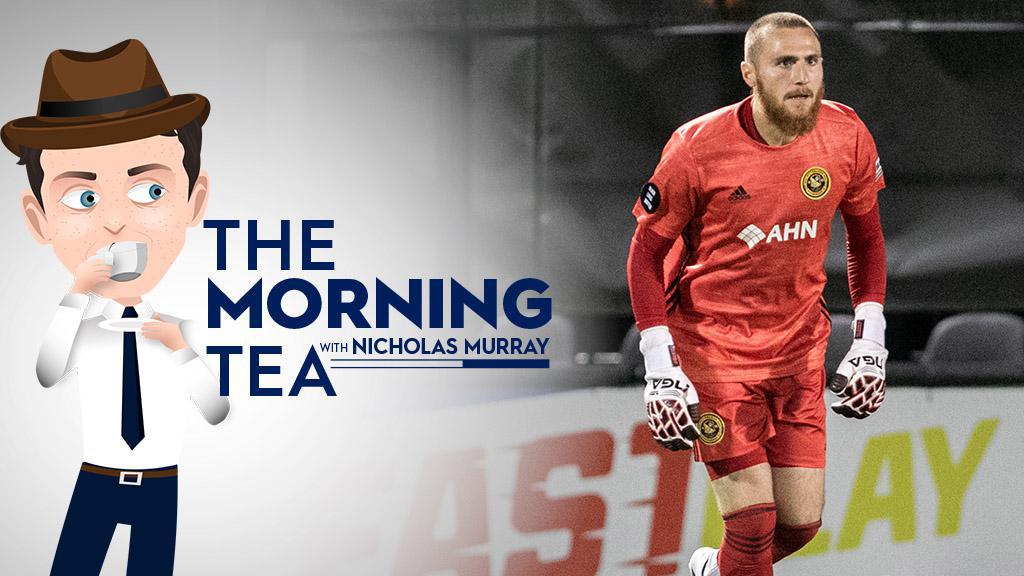 It’s almost awards season in the Championship, with the first three announcements set to be made the day following the conclusion of the regular season. But when it comes to one of the league’s statistical awards, the final countdown is on for two contenders. Here’s your Morning Tea for Friday.

It’s a quirk of the category, but the goalkeeper with arguably the best chance to win the USL Championship’s Golden Glove at the end of the season is one that doesn’t appear on the current leaderboard.

Still in the race pic.twitter.com/2UhUpda8OQ

That’s because unlike in the race for the Championship’s Golden Boot or Assists Champion where a player’s cumulative total is what it is regardless of games or minutes played, the Golden Glove requires a goalkeeper to have played at least 50 percent of his clubs minutes during a regular season.

Pittsburgh Riverhounds SC’s Danny Vitiello has a goals-against average of 0.33 through his six appearances for the Hounds this season, recording shutouts in five of those contests. He’s been at the center of the Hounds’ current shutout streak, which is currently at 483 minutes going into Saturday’s game with Hartford Athletic.

But unless he plays all 180 minutes of the Hounds’ remaining two games of the season, Vitiello won’t reach the 720-minute cutoff – equal to eight full games – required to qualify for the award. That could certainly be a bit disappointing in the short-term, but if there’s a silver lining it’s that the second-year pro is certainly making a name for himself in his first real chance after standout campaigns in USL League Two and the college ranks.

After starting his career last year with Nashville SC – during which time he also went on loan to New Mexico United – the 24-year-old landed in Pittsburgh this offseason and has done everything asked of him. He’s now taking the majority of the minutes after Tomas Gomez’s eight appearances earlier in the season, and is sporting a save percentage of 85.7 percent having made 12 saves on 14 shots, including going 1 of 2 on penalty kicks.

“He’s just been steady, you know,” said Hounds Head Coach Bob Lilley this week in a conference call with reporters. “I don’t think he’s had a lot to do, he’s made a few good saves but he’s been clean. I think he’s dealt with crosses well, his kicking’s been pretty solid. I think it shows composure that you don’t always get with young goalkeepers.

“I think he’s handled it well, and I think it’s one of the things we look at with our goalkeepers; manage the game, be efficient. Be there to cover your backs whether its for balls over the top or coming for crosses, and I think he’s been a good cover piece for the defenders, he’s communicated well.”

Vitiello isn’t alone in racing the minute counter to get to Golden Glove eligibility. The Charleston Battery’s Joe Kuzminsky finds himself with almost identical numbers through six appearances, with one fewer shutout but the same 0.33 goals-against average since his return from a loan spell with Maccabi Haifa in the Israeli Premier League. The Battery have three games remaining, giving Kuzminky a little more wiggle room to get to the 720-minutes mark for the season.

But as well as the Hounds are playing defensively of late, don’t be surprised if Vitiello is the one walking away with an award two weeks from now.

As long as he gets his minutes in, anyway.

“Right now Danny’s playing well, and Tomas and Anthony [Mwembia] have been training well,” said Lilley. “They’re all pushing each other, so I’m pretty happy with our goalkeepers overall right now.”

How about this screamer from Tomas Hilliard-Arce?!!
The Sacramento Republic FC defender nets a beauty in their game of "one touch" to wrap up practice @SacRepublicFC @TomasHilliard @USLChampionship @kcranews pic.twitter.com/hvS51QQYDv

Was great seeing some @StLouligans friends last night in Indy to support our team. Was a strange experience watching the last road game of @SaintLouisFC. The game was strange too. Seemed totally appropriate for this club. #ToTheBitterEnd #OneOfUs #Always

- Louisville City FC’s system was out of sync at the start of the season resumption. Now, though, the intricate pressing and movement that make up Head Coach John Hackworth’s ideal style has the side clicking on all cylinders as it gets ready to try and claim a third USL Championship title. The Louisville Courier-Journal’s Tim Sullivan has more on the team’s resurgence.

- Wednesday night brought the final home regular season game of the season for Hartford Athletic, which has welcomed fans to Dillon Stadium with social distancing protocols in place. The Journal Inquirer’s Adam Betz spent the night with the club’s supporters’ groups for a video piece from the clash against the Philadelphia Union II.

- Santi Moar had some early ups and downs as the season resumed for Phoenix Rising FC in July, but the offseason addition is finding the form that made him a target for the club in free agency and now has five assists on the campaign. Arizona Sports’ Jake Anderson has more on Moar’s upswing in form, and why he could be an essential piece to the club moving forward.

- New Mexico United will bring fans together in two cities for its final game of the regular season next Wednesday night with Drive-In Watch Parties planned in both Albuquerque and Santa Fe. The event will allow United fans to be able to listen to FM-transmitted match commentary in a COVID-safe environment.

- The Portland Timbers 2's Jorge Gonzalez continued his outstanding month with two goals on Thursday night to lead T2 to a 3-1 victory against Tacoma Defiance at Providence Park. Gonzalez now has six goals in four games this month, tied for the most in the Championship with FC Tulsa's Dario Suarez, as both look like potential Player of the Month candidates early in October.