MURRAY: What Would Happen If the Postseason Started Today?

What matchups would be in place, and who might advance, if things remained as they are 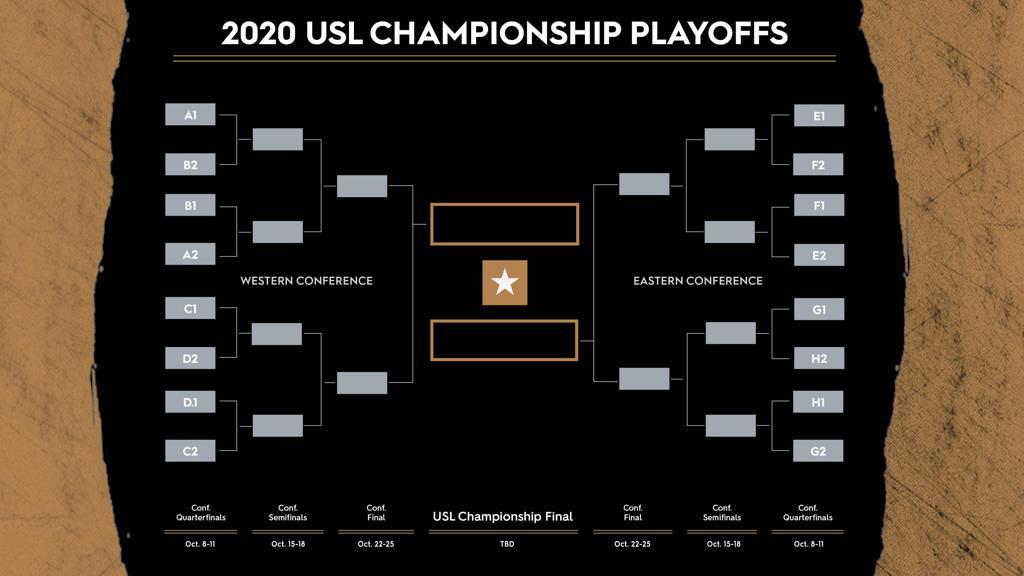 We’re three weeks away from the start of the 2020 USL Championship Playoffs, and seven teams have already booked their places in the postseason as of Friday morning. So, we’ve decided to break out our crystal ball, take a look into the future and see where things would stand if the postseason began today, and who might come out on top at the end.

Now, granted, I might not be the best person to make these types of prognostications – just look at my record in Pick ‘Em this season, not pretty – but I’m going to take a run at it anyway so you can all laugh at me in a few weeks.

Before we get started, though, let's hear from you guys on how you think this postseason could play out. Let us know in the poll below which team you think is going to lift the trophy at the USL Championship Final.

And now.... here's how I see things playing out. 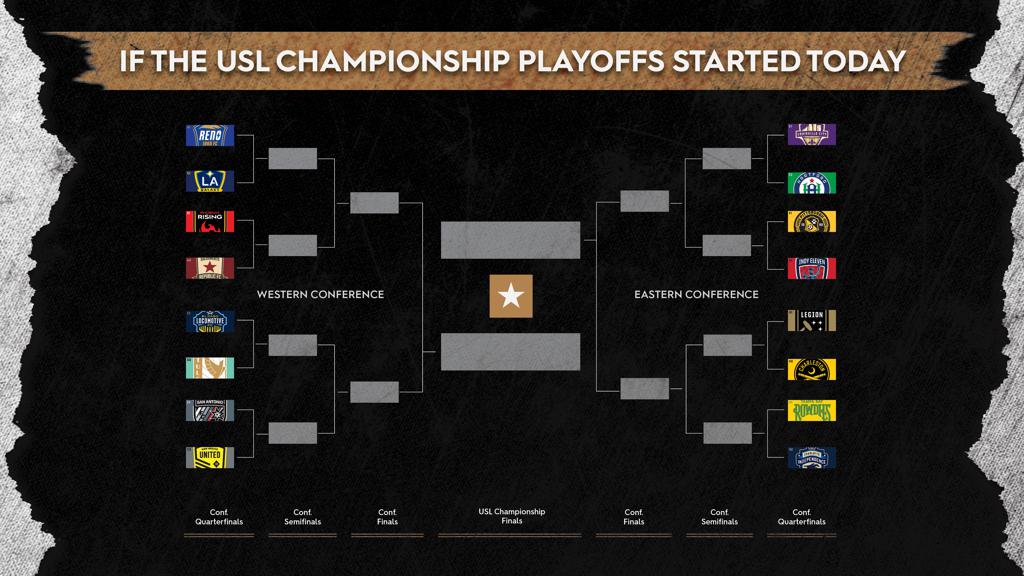 Pittsburgh Riverhounds SC (F1) vs. Indy Eleven (E2): Now, here’s where things get much more interesting. Indy has two wins against the Hounds to its credit this season – including one where it held on down a man while stifling Pittsburgh’s attack for almost the entire second half. But the trajectory of these two teams since those meetings means Indy is under pressure to claim second place from Saint Louis FC, while the Hounds attack has gone from strength-to-strength. The hosts take this one, narrowly, and overturn the regular season results.
Prediction: Pittsburgh Riverhounds SC 2, Indy Eleven 1

Birmingham Legion FC (G1) vs. Charleston Battery (H2): This figures to be another really tough matchup to call. Birmingham claimed victory on the road against the Battery early after the season resumption, but the Battery showed enough in that 2-1 defeat that served as the precursor to the club’s form since, which has seen it move within a point of the playoffs at this stage. Be prepared for action at both ends, and potentially extra time to decide it.
Prediction: Birmingham Legion FC 3, Charleston Battery 2 [AET)

Reno 1868 FC (A1) vs. LA Galaxy II (B2): There’s a lot that could change between now and the start of the playoffs in Group B, but for now LA Galaxy II are in line to get a trip to Reno 1868 FC to kick off the postseason. Los Dos getting back for a second consecutive playoff appearance has been led by the attacking ability of the side, which has scored 22 goals so far this season, but it looks like it’s going to need every bit of its attacking ability to get past 1868 FC, which has put up 33 goals this campaign. We’re probably in for some entertainment here, but the hosts will come through in the end.
Prediction: Reno 1868 FC 4, LA Galaxy II 2

Phoenix Rising FC (B1) vs. Sacramento Republic FC (A2): If this holds, it might stand as the most interesting Conference Quarterfinal matchup of the eight we have slated. You see, Sacramento has never really held that much fear of going into Casino Arizona Field. Two years ago, it came out with a 3-1 victory, and last year even when Phoenix was in the middle of its record-setting 20-game undefeated streak Sacramento took an early lead through Cameron Iwasa before falling 2-1. Phoenix will enter this game as the favorite, no doubt, but Republic FC has what it takes to give them a serious game.
Prediction: Phoenix Rising FC 2, Sacramento Republic FC 1 [AET]

El Paso Locomotive FC (C1) vs. FC Tulsa (D2): FC Tulsa’s road to a potential playoff berth hasn’t always been pretty, although some of the goals scored by Dario Suarez have, but with the form and homefield advantage El Paso Locomotive FC will be wielding over its visitors this looks like a game that should go to the hosts. Locomotive FC has come through its own difficult start to the season and is currently on a four-game winning streak going into Saturday’s contest with Real Monarchs SLC. Add in the playoff pedigree Locomotive FC showed reaching the Western Conference Final a year ago, and this is a relatively easy pick.
Prediction: El Paso Locomotive FC 2, FC Tulsa 0

San Antonio FC (D1) vs. New Mexico United (C2): If Phoenix vs. Sacramento is the most intriguing potential matchup in this round, San Antonio FC and New Mexico United might have the most storylines. You’ve got a matchup of the two teams that were vying for the last spot in the 2019 Western Conference Playoffs, when United won on the last day of the season to jump SAFC, and then this year where San Antonio has been outstanding at home while New Mexico have been the Championship’s road warriors. The matchup of two talented and balanced sides figures to be an entertaining one, and could be too close to decide in 120 minutes.
Prediction: San Antonio FC 2, New Mexico United 2 [New Mexico wins 5-4 in a penalty shootout]

Pittsburgh Riverhounds SC vs. Louisville City FC: With the side with the better regular-season record earning hosting duties from hereon in, we’re back on the banks of the Monongahela River for a rematch from last season’s Conference Semifinals that saw Louisville grab victory in extra time after the Hounds had held a first-half lead. I mentioned Louisville’s record of never failing to reach the Conference Final previously, right? Well, streaks are meant to be broken, and with Kenardo Forbes back on the field after recovering from injury the Hounds not only get their first-half lead, but this time hold onto it as they eliminate the defending Eastern Conference champion, replicating their victory at Lynn Family Stadium earlier this year.
Prediction: Pittsburgh Riverhounds SC 3, Louisville City FC 1

Tampa Bay Rowdies vs. Birmingham Legion FC: We’ve seen this matchup before as well this season when Legion FC rallied on home turf to take a 1-1 draw with the Rowdies. With Tampa Bay getting to host this time around, however, you’d have to give the edge to the Rowdies, who build off their confidence-boosting victory against the Independence to put in a tight defensive performance that bottles up Neco Brett, Bruno Lapa and the rest of Birmingham’s attack. Sebastian Guenzatti provides the goals and sends the Rowdies onto their first Eastern Conference Final appearance.
Prediction: Tampa Bay Rowdies 2, Birmingham Legion FC 0

Reno 1868 FC vs. Phoenix Rising FC: Reno pulled off a big victory in its bid to claim Group A when it defeated Phoenix Rising FC, and that result also meant 1868 FC gets hosting duties for their postseason rematch. There’s also some hope here for the hosts in that they could emulate Real Monarchs SLC a season ago, which took victory against Phoenix late in the regular season and then again in the playoffs. But… this is Phoenix, and this is a team that after the past two years of disappointment seems determined to put it all together. Going back to Greater Nevada Field and earning revenge for its prior defeat seems like the most likely outcome here, so that’s what I’m going with.
Prediction: Phoenix Rising FC 3, Reno 1868 FC 1

El Paso Locomotive FC vs. New Mexico United: Well, here we are again. After meeting four times at Southwest University Park during the regular season, how about one for the thumb as well? The thing is, for New Mexico United, El Paso hasn’t been an unhappy hunting ground in the past with the smaller dimensions of Locomotive FC field playing nicely into the pressing style that United prefers. Locomotive FC has shown excellent resilience of late, including finally grabbing its first win against United when the sides met on September 5, but New Mexico’s road warrior status achieves mythical proportion thanks to Chris Wehan and Amando Moreno this time around.
Prediction: New Mexico United 2, El Paso Locomotive FC 1

Phoenix Rising FC vs. New Mexico United: Oh, boy. Here we are, back at Casino Arizona Field once again with maybe the highest stakes these two sides have faced when squaring off against each other. The first prediction – and its not a particularly difficult one – is there will be goals; these teams have averaged 5.25 goals per game in their four prior meetings. The second, which is much harder, is that New Mexico United has learned from its 5-2 defeat against Phoenix when the sides met earlier this season. Recording three shutouts and conceding only five goals in six games since then, United has figured out a better balance between defense and attack, putting it in the playoffs comfortably as a result. That means, while both sides strike, the game remains in the balance into extra time, and then a penalty shootout. And then, close your eyes and make a wish.
Prediction: Phoenix Rising FC 2, New Mexico United 2 [Phoenix wins 7-6 in a penalty shootout]

Phoenix Rising FC vs. Tampa Bay Rowdies: With more points at the end of the regular season, a Western Conference side finally hosts the USL Championship Final for the first time since conferences were instituted in 2015. Buoyed by its dramatic victory in a shootout against New Mexico United – and with Junior Flemmings motivated to shine against his former club – Rising FC jumps out of the gate fast in front of its socially-distanced fans at Casino Arizona Field. But, using their speed on the counterattack the Rowdies strike first as Leo Fernandes sets up Juan Tejada for the opening goal in the first half.

Undaunted thanks to the club’s ability to rally from deficits – Phoenix has gained six points from losing positions so far this season – the hosts find a way back into the game as Rufat Dadashov equalizes early in the second half off a through-ball from Flemmings cutting in from the left. Then with less than 10 minutes to go, Flemmings has his moment. Picking up play on the left flank, he slides past former teammate Mustapha Dumbuya – now with the Rowdies – toward the top-left edge of the penalty area and fires a curling shot to the top-right corner of the net that picks out the corner. The crowd goes wild, Solomon Asante lifts the trophy, H. Jose Bosch melts while capturing social media footage, and Rising FC finally has the silverware it has always wanted.
Prediction: Phoenix Rising FC 2, Tampa Bay Rowdies 1