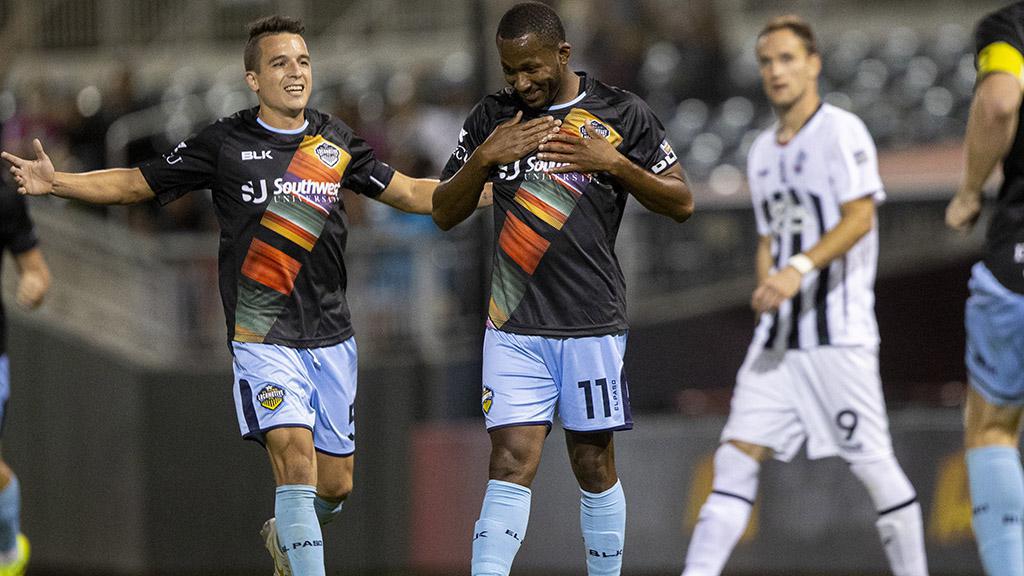 EL PASO, Texas – El Paso Locomotive FC moved into first place in Group C as it took a 2-1 victory against Colorado Springs Switchbacks FC on Wednesday night at Southwest University Park, moving ahead of New Mexico United in their battle for top spot in the standings.

Looking to take their winning streak to four games, Locomotive FC had the first chance to take the lead in the ninth minute as a cross from the right came through the penalty area to Chapa Herrera, but his curling finish back toward the top-right corner floated just over the crossbar. The hosts went close again 12 minutes later as a ball cleared from a cross from the left was headed straight back into the penalty area by Richie Ryan and came to Leandro Carrijó, only for his quick turn and shot to be turned away by Switchbacks goalkeeper Sean Melvin.

Colorado Springs had a half-chance 10 minutes before halftime as Adrian Diz Pe guided a header on goal from a corner kick that was comfortably saved by El Paso goalkeeper Logan Ketterer. Eight minutes into the second half, however, Locomotive FC struck from a corner kick of its own as Ryan’s delivery from the right was met at the near post by Saeed Robinson, whose flicked header went in off the underside of the crossbar against his former club for his first goal in El Paso colors.

Locomotive FC tried to double its lead just after the hour-mark as Herrera slipped a clever pass into the penalty area for Dylan Mares, who turned on the ball as he received it and fired a snap-shot from the left side of the penalty area that Melvin was able to control. Shortly after, Ketterer had to be sharp to keep the hosts ahead as he parried a shot by Osvaldo Luna and then controlled the rebound after it flew high in the air.

The hosts found some breathing room as they notched a second goal with 16 minutes to go, as Bryam Rebellon slid a good pass into the left channel that eluded a defender and found Omar Salgado in space. The El Paso native controlled and then ripped a shot from the left side of the penalty area into the right corner of the net to cement Locomotive FC’s advantage.

That goal proved necessary as with nine minutes to go the Switchbacks pulled a goal back when Luke Ferreira got in on an overlap on the right and cut a low cross back to Mamadi Camara, whose shot deflected off one defender and found the left side of the net. Ketterer then had to come up big to keep it a one-goal game for the hosts a couple of minutes later as he parried away a shot by Aidan Daniels that was headed to the bottom-left corner from 25 yards.

Locomotive FC had one last chance to restore a two-goal lead with two minutes remaining only for his effort to be palmed over at close quarters by Melvin, but the hosts saw out the victory to claim all three points and top spot in the group going to the weekend’s action.

Richie Ryan, El Paso Locomotive FC – Ryan had one assist and three key passes while completing 30 of 37 passes overall and winning 4 of 6 duels in a solid midfield display.