THE MORNING TEA – On Fifth Anniversary, 1868 FC Primed Once Again 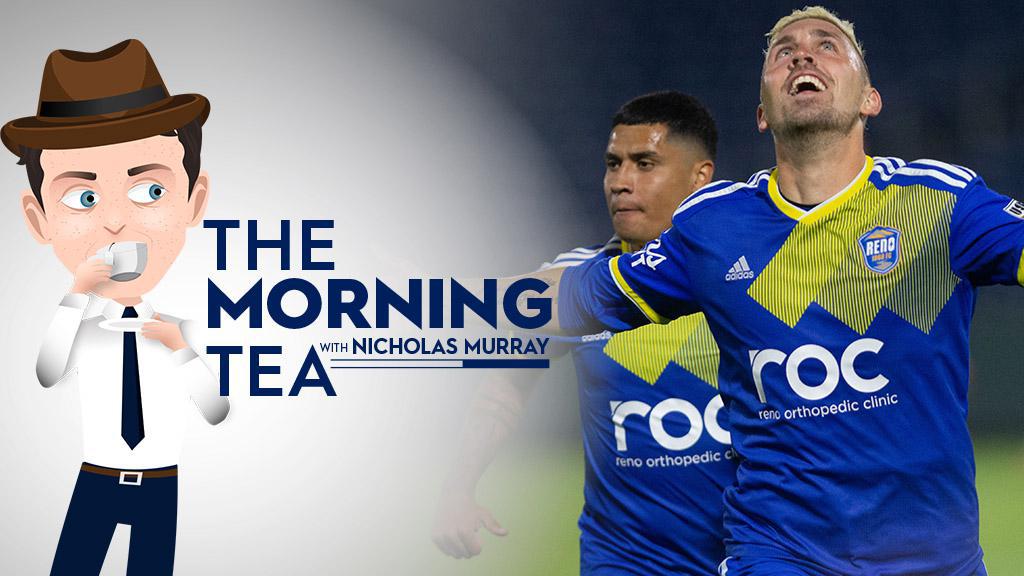 One-quarter of the field for the 2020 Championship Playoffs was determined on Wednesday night, giving us five teams overall in the field so far. First up today, we take a look at a team that can join them in tonight’s action, one of the best stories in the league’s recent history. Here’s your Morning Tea for Thursday.

Anniversaries are often a time of reflection, and anticipation for what’s to come.

On Wednesday, as Reno 1868 FC celebrated the fifth anniversary of its official launch in 2015, there was cause for celebration on both.

The club’s arrival as a club that would operate under a hybrid model of strong local ownership led by Herb Simon – also owner of the NBA’s Indiana Pacers – and the technical insight of the San Jose Earthquakes was still a new concept at the time. Over its first four seasons, 1868 FC has shown what can happen when everything is working in-sync, producing successful teams on the field, and providing a pathway for top talent to progress to even bigger opportunities.

A lot of credit for each aspect has to go to the two key figures throughout the club’s history. In President Eric Edelstein, 1868 FC had someone with outstanding experience in the baseball business who has quickly adapted those abilities to building a successful club with strong support and local partners.

In Head Coach Ian Russell, meanwhile, Reno has had a firm hand at the wheel in building successful teams each season. Since 1868 FC joined the league, it has been one of the most successful in the regular season, and one of the most entertaining in the league thanks to a brand of high-octane, attacking soccer that Russell has made his trademark.

Since the start of the 2017 Championship season, only Phoenix Rising FC and Louisville City FC have registered more victories than Reno’s 59 in the regular season, and only Phoenix has scored more goals than Reno’s 233. Keeping core pieces in place like Brent Richards – who earlier this year became the first player to record 100 appearances in the club’s colors – to shrewd additions year by year – where there once was Dane Kelly and Brian Brown, now there is Corey Hertzog leading the club’s attack – Russell’s astuteness in identifying talent that will fit in with the team’s style has been impressive.

Then there are those that he’s helped build in Reno that are now making an impact on a bigger stage. Current U.S. Men’s National Team player Jackson Yueill played in 1868 FC’s first season on loan from San Jose. Then there are those like U.S. U23 goalkeeper JT Marcinkowski, who has made 41 appearances for the club as he cut his teeth in Reno awaiting his shot with the Quakes, or U.S. Youth International Cade Cowell, who last year became the second-youngest goalscorer in the Championship’s history behind some guy called Alphonso Davies.

Reno can clinch its fourth consecutive playoff berth on Thursday night with either a win or a draw against Tacoma Defiance, and then the road to the title will be set in the final weeks of the season. If there’s been one missing chapter in 1868 FC’s story so far, it’s been finding success in the 2020 USL Championship Playoffs.

As far as Russell’s side has come this year, it could just be the season that corner is finally turned and 1868 FC finds the postseason success it has craved.

(2-7-1)
Group A
The Gist: 1868 FC can clinch its playoff place and take a three-point lead at the top of Group A when it takes on Tacoma Defiance at Greater Nevada Field. 1868 FC is level on points with Sacramento Republic FC in the group standings after salvaging a 3-3 draw on Saturday night at Papa Murphy’s Park after Aidan Apodaca scored in second-half stoppage time. That left the door open for Reno to jump clear of Sacramento as it welcomes the Defiance to Greater Nevada Field, where 1868 FC has won four of five outings this season. Tacoma will be playing for its playoff life as anything but a win would see it officially eliminated from playoff contention, but the Defiance’s recent form has not been good. Currently on a five-game losing streak that began with a 2-1 loss to Reno on August 8, Tacoma fell 3-0 to the Portland Timbers 2 in its last outing, a result that saw T2 win its first game of the season.
Discipline: None

In the immortal words of Peter Trevisani, “We’re doin’ it.” pic.twitter.com/N1HtLGtpva

- Wednesday was a big night for playoff berths as four teams locked up their spots in the postseason. San Antonio FC didn’t just do that, it also claimed top spot in Group D after a thrilling 3-2 win against Austin Bold FC, and the San Antonio News-Express’ Greg Luca was on hand for all the action.

- The Tampa Bay Rowdies became the second Eastern Conference side to earn their place as a late goal by Sebastian Guenzatti earned a 2-1 win against Atlanta United 2. Guenzatti’s late goal meant the Rowdies now have a six-point lead on the Charleston Battery in Group H, the Tampa Bay Times’ Darek Sharp has more.

- El Paso Locomotive FC is also into the postseason after it took a 2-1 victory against Colorado Springs Switchbacks FC. That result, combined Real Monarchs SLC’s defeat to the Portland Timbers 2 later on Wednesday night, means El Paso will be in the postseason for a second consecutive season.

- Locomotive FC will now face a battle for first place in Group C with New Mexico United, which also clinched its playoff spot thanks to the Monarchs’ defeat without kicking a ball. As it prepares for Saturday’s “home” match with the Switchbacks at Weidner Field, the side is ready to play in front of its own fans again.

- Louisville City FC didn’t clinch a playoff berth on Wednesday night, but it set itself up handily to claim Group E at the end of the regular season with a 2-0 victory against Indy Eleven, its third in a row against its LIPAFC rival. The Indianapolis Star’s Kevin Johnson was on hand to see the hosts unable to find the formula for success against LouCity once again.

- Birmingham Legion FC wanted to make a statement after its defeat to the Charlotte Independence, and it did just that in a 4-0 win against Miami FC at Riccardo Silva Stadium that pushed the hosts to the brink of elimination. Three goals in the final 10 minutes of the first half paved the way for Legion FC, which is now four points ahead of Charlotte in Group G.

- Hartford Athletic also picked up a useful victory in its bid to reach the playoffs for the first time, defeating the New York Red Bulls II at Dillon Stadium. Newcomer Idan Cohen made a positive impact, while New York City FC loanee Justin Haak found the net in a 3-1 win that moved the Athletic three points from a playoff place.

- Phoenix Rising FC made a big addition to its back line with the arrival of Jamaican international Damion Lowe on Wednesday. Lowe has played previously with both Rising FC’s Junior Flemmings and Kevon Lambert at the international level and brings size and experience to bolster Phoenix’s back line as it prepares for its playoff drive.