TAMPA, Fla. – The USL Championship announced the Team of the Week Presented by Cleer Audio for Week 12 of the 2020 regular season on Tuesday, with Loudoun United FC’s Simon Lefebvre earning Player of the Week honors after tying the Championship’s single-game record for saves in his side’s contest against the Philadelphia Union II on Saturday night.

Selected 21st overall in the 2020 MLS SuperDraft after competing for Temple University and USL League Two’s Reading United AC, the 6-foot-9 Lefebvre recorded 13 saves as United held on to claim a 1-1 draw against the Union II despite playing down a man for the final 77 minutes after an early red card. Lefebvre is the fourth player to record 13 saves in a Championship regular season game, and the first since Tacoma Defiance’s Trey Muse against New Mexico United on October 16, 2019.

Lefebvre earned 48 percent of the ballot for his performance. FC Tulsa’s Dario Suarez finished second on 24 percent after recording three goals in two outings over the week to help keep his side in contention for a place in the postseason, while the New York Red Bulls II’s Omar Sowe finished third on 19 percent after recording his first professional hat trick against the Union II last Wednesday evening. 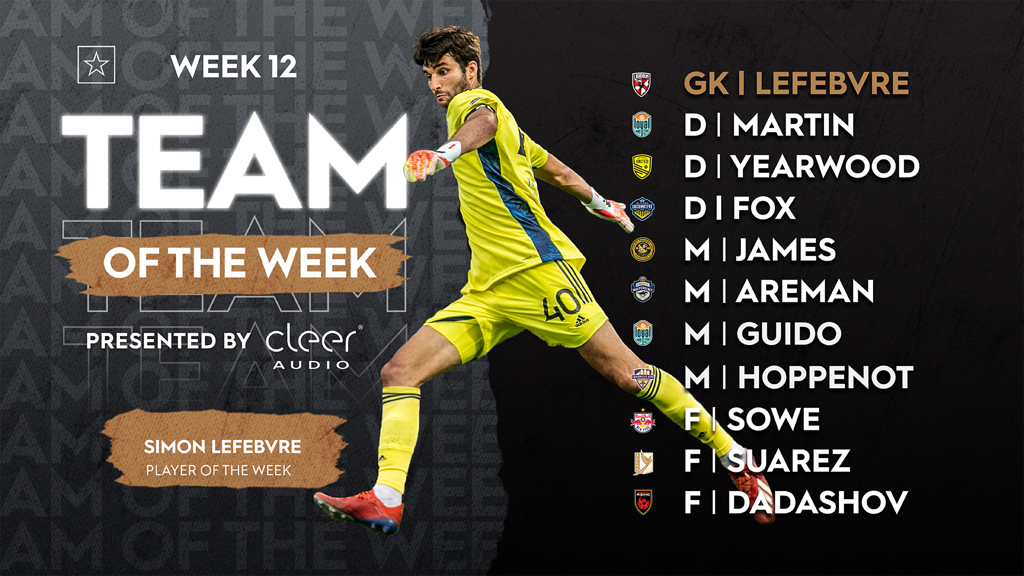 GK – Simon Lefebvre, Loudoun United FC: Lefevbre tied a Championship single-game record with 13 saves as United played to a 1-1 draw with the Philadelphia Union II on Saturday night despite being down to 10 men for 77 minutes.

D – Elijah Martin, San Diego Loyal SC: Martin helped SD Loyal record two shutouts as it conceded only three shots on goal for the week, while individually he completed 103 of 123 passes and recorded 16 recoveries across the two games and made a key goal-line clearance against Orange County SC on Sunday night.

M – Ryan James, Pittsburgh Riverhounds SC: James recorded his second two-goal game of the season and recorded three shots, completed 55 of 64 passes and won 3 of 4 tackles in the Hounds’ 5-0 win against Hartford Athletic.

M – Alejandro Guido, San Diego Loyal SC: Guido recorded two goals and one assist while completing 6 of 9 dribbles and winning 14 of 25 duels as SD Loyal swept past the LA Galaxy II and Orange County SC and into second place in Group B.

M – Antoine Hoppenot, Louisville City FC: Hoppenot recorded one goal and one assist, had three key passes and completed 17 of 24 passes overall as LouCity cruised to a 3-0 victory against Saint Louis FC and back to the top of Group E.